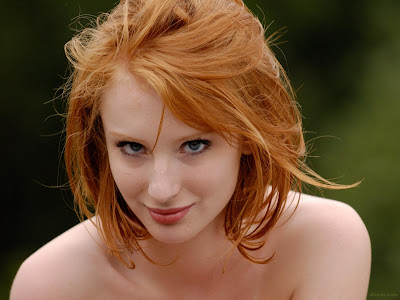 So, when's the special treat coming? All I see is the place holder photo of some redhead. ;-)

Wash your mouth out with soap!
I almost went into shock yesterday from beauty overload when I found this picture.

Don't worry, they're as snappy as ever.

A redhead! Just what I wanted! How did you know???

I just counted on you thinking like me. Redheads make me go a big rubbaduck one.

Is she on Domai yet? If so what date?

She'll come in around four weeks.

Ok, I will, but I think you all should watch this short lecture by Stephen Hawking. It's profound.

I don't get it. Was this real? What's a hawk roll?

It all started out way back in the day...

"Rickrolling" is what real geeks consider humor? That's greatly puzzling to me. Wherein does the humor lie?
(Though it does explain the Hawking thing, which is sorta funny on that background.)

Hey! Dont judge the 80's unless you were there! (thankfully I was into metal, but I remember him. It's not like he was the only one who looked/danced/sang that way.)

Rickroll is just like the can of peanuts that you open only to have fake snakes jump out at you. Hahaha.. that was not what I was expecting. That is funny.
I think its funnier how long it has survieved as an internet meme.

It's true. Even David Bowie wore suits and coats like that, then. Very unfortunate.

I wanna shoot her for Domai. That would be my first shoot for Domai - as I'm also a RedHeadLover.

To clarify: I was not putting down the eighties in general, only this video. It was worth it missing all of TV in the eighties just so I didn't have to suffer this one. :-)

I wanna shoot her for Domai.

I say, let's keep her alive.

To clarify: I was not putting down the eighties in general, only this video.

But you also put down the appearance of people like Bowie. I think Bowie, a master of style, looked fabulous in the 1980s.

I grant you he was the one person who could pull it off if anybody could.

She's hot. I'd like to quit my job and bang her 22 hours a day. The other hours I'd let her suck my dick.