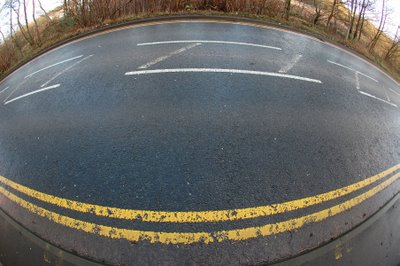 This is another one which I only took because I was thinking "heck, you might as well snap it, it'll cost nothing since it's digital, and who knows, it might work anyway." And lo and behold, I like it. I might be learning something here, but darn if I know what.
Posted by Eolake Stobblehouse at Saturday, January 06, 2007 5 comments: 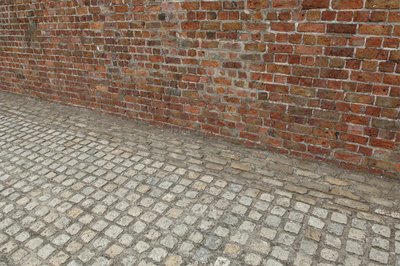 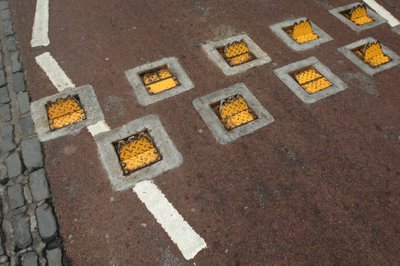 (As to why I post these right now, see my comment on David's blog.)
(Oh, I forgot he is moderating his comments. If it is not posted yet, I said I took some similar shots when he and I photographed in Liverpool.)
Posted by Eolake Stobblehouse at Saturday, January 06, 2007 2 comments: 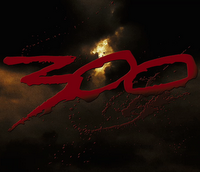 Frank Miller wrote what I consider still the best superhero comic book ever, The Dark Knight Returns.
His later comic "300" has been made into a film. Like "Sin City" it is clearly mostly computer generated, but in my opinion, it looks much better than Sin City. In fact, I have never seen anything like it. Truly amazing. What Jurassic Park once heralded for movie making, we are now starting to see happening, though rather later than I expected. Meaning really convincing fantasy.

I should note that I agree with Miller's colleague Alan Moore when he says that Miller's stories for all their power and skill are still all limited by all of them being just stories about tough guys being tough. And especially to a pacifist like me, that's a strict limitation. But still, good art.
Posted by Eolake Stobblehouse at Saturday, January 06, 2007 3 comments: 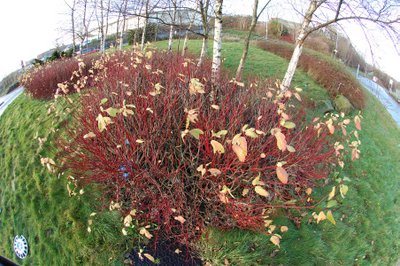 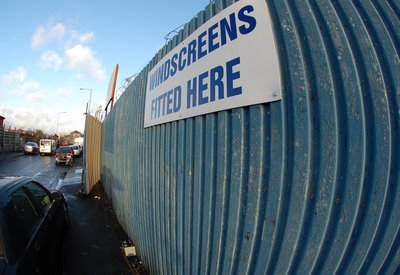 A wonderful thing about digital photography is that you can experiment a lot more, because you don't have to pay for film and development. With film, I wouldn't have snapped this one for instance, for I didn't really believe in it. But most pictures you can't really judge until you see them on a screen.
Posted by Eolake Stobblehouse at Saturday, January 06, 2007 2 comments: 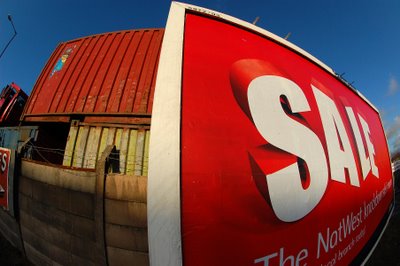 The colors are not computer-enhanced!
Posted by Eolake Stobblehouse at Friday, January 05, 2007 1 comment:

I just got the amazing mail below. (Inspired by this week's newsletter at Domai.)
I was hesitant at first in posting it, because some might think the story is about how we should not discrimiate against the handicapped, which is true but it is not the point here. It is about seeing the bigger picture, and being open to beauty and communication which does not fit the surface picture of "nice". - Eolake

"A minister I talked to was serving at a nondenominational church in a small town. Among the attendees at the church was a young man who would be considered severely mentally retarded. His speech was affected and he was basically unintelligible to most people, yet the minister became familiar enough with him to be able to communicate reasonably well. One day the young man asked to lead the congregation in a song. This amazed the minister and he promised to give consideration to it. Eventually, he decided to let the young man have his wish.

"After the service, the minister was very upset to discover the venom that poured forth from several members. They were outraged that he would allow this to take place. How dare he allow this freak to desecrate the service by such a hideous display?

"The minister was telling me about the incident. He had not figured out how to respond to the critics, although in his heart he truly thought that he had done the right thing to allow this young man to sing. I ponted out to the man that in the religious literature I am familiar with, there exists a commandment ""to make a joyful noise unto the Lord.". I never found a commandement that said to "make a joyful noise unto the Lord, but only if it is pleasing to your fellows." The young man had asked to sing and the minister had felt right in granting his request. He was NOT obligated to run the request by a commitee. The young man's request had come from his heart and it only had to please his Lord. The pastor was beaming when he left me, because he had a topic for a new message to his congregation that he felt could strike at the core of the problem and give all of them pause to consider what constitutes Beauty."
Posted by Eolake Stobblehouse at Friday, January 05, 2007 38 comments: 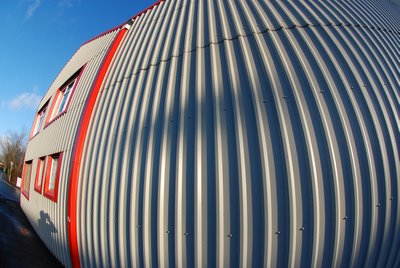 I was a little in doubt if I could make worthwhile pictures with a fisheye lens, if I could fit subtle artistic values into the overbearing effect such a lens has. But I have proved it at least to my own satisfaction with this picture from today, I like it a lot.
Posted by Eolake Stobblehouse at Friday, January 05, 2007 3 comments: 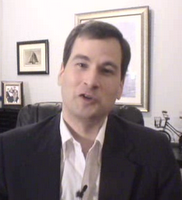 David Pogue again displays his near-unique talent for combining the informative with the entertaining.
Posted by Eolake Stobblehouse at Friday, January 05, 2007 No comments: 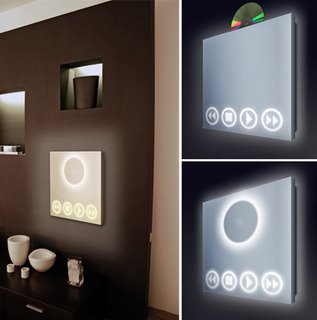 This thingy is very beautiful. Only it really should have come out five or ten years ago, before we all burned all our CDs. (Or is it "ripped" our CDs? It's pretty tough plastic to rip, and they don't burn well either.)
Posted by Eolake Stobblehouse at Thursday, January 04, 2007 2 comments: 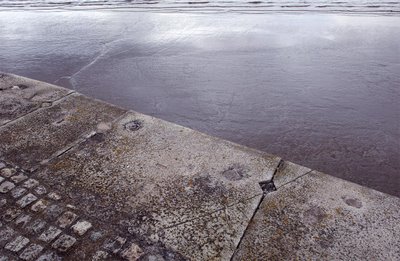 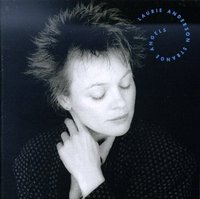 Just another example of how art can help you: Laurie Anderson's wonderful song Monkey's Paw ("I got everything I ever wanted. Now I can't give it up. It's a trap, just my luck!") made me think, back a decade ago, about the philosophical principle of the title. You may know it already: Apparently in India, they trap monkeys by hollowing out a coconut, securing it, making a hole in it just large enough for a monkey to get his hand in. They put rice in the coconut. The monkey put his hand in, grabs some rice... but he can't get his hand out with his fist closed! And he is not willing to give up the rice, so he is trapped.

Basically, anything you can't give up, money, sex, status, special relationships, ego, fame, emotions... it traps you.
The key principle to spiritual freedom is to LET GO.

Thinking about this has helped me immensely in recent years, and it is taken to new levels in A Course In Miracles. Get the book for free, I've made a PDF file. (5.4 MB)
Posted by Eolake Stobblehouse at Wednesday, January 03, 2007 33 comments:

Holed up in Texas

There is a new photo blog from my friend David in Liverpool.
First time I met David, I told him that he actually do look a little like John Lennon. He made a face, I was never quite sure if he did not like the idea, or if he did not believe the compliment.
The blog is called Chapter Thirteen, but he says it does not refer to the American term meaning bankrupt.

Me and David (frig grammar) spent a nice afternoon in Liverpool photographing. For some reason I never posted those images, maybe I should if you think. Here are the first two. (Obviously the bloke on the bench with the huge Canon is David.) 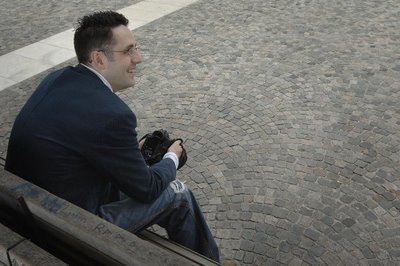 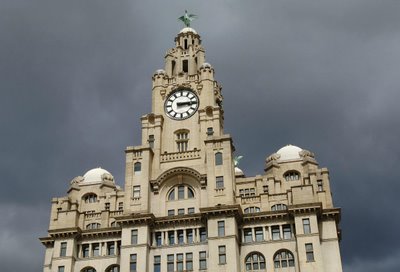 "Blogging on a Beautiful Spring Day"

Michael Johnston has perpetrated another excellent satire in:
Blogging on a Beautiful Spring Day
Posted by Eolake Stobblehouse at Tuesday, January 02, 2007 16 comments: 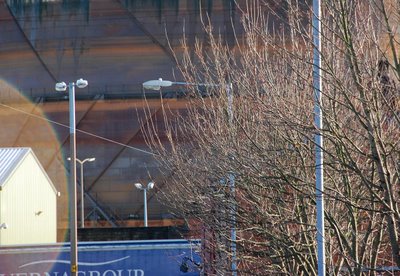 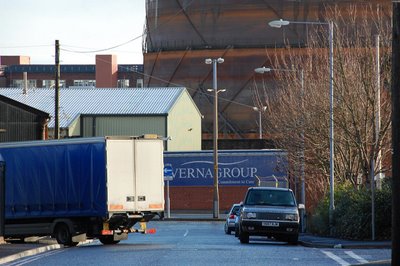 This is a different definition of "sepia", hehe. (Number four instead of three.)

se·pi·a (s?'p?-?)
n.
1. A dark brown ink or pigment originally prepared from the secretion of the cuttlefish.
2. A drawing or picture done in this pigment.
3. A photograph in a brown tint.
4. A dark grayish yellow brown to dark or moderate olive brown.

By the way, it is funny, this happens sometimes: originally when viewing the series of shots I took of this subject, I thought I had failed with it. But looking over them now, I really like this one. 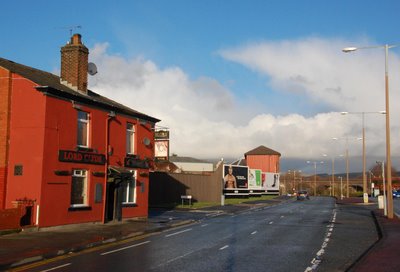 "People are fond of spouting out the old cliché about how Van Gogh never sold a painting in his lifetime. Somehow his example serves to justify to us, decades later, that there is somehow merit in utter failure. Perhaps, but the man did commit suicide."
-- Hugh Macleod, How To Be Creative: 29. Whatever choice you make, The Devil gets his due eventually

Well, this is quite funny, well done Hugh.
On the other hand, I think Hugh's main point is misses its target. For one thing, it is either uneducated or disingenuous to hint that Vincent committed suicide because he was not selling well. If you read about him, it was clear that while he had existential angst out the wazoo, he was happy if he just had food and paint.

For another thing, if Vincent was actually a "failure" would anybody be using him as an inspiration? They use him because he was one of the biggest successes fine art has ever produced, only he died too young to see it happen. So the example is not "merit in utter failure", but merit in being highly successful even if it has not happened yet.

You can also see Vincent as an example of somebody who saw the bigger picture. Sure, he was agonizing about not being able to live the "real life" as he called it, with family, house, money, and respectability... and yet his art was so important to him that he sacrificed all that for it. And the world is much richer for it.
-----
Anyway, looking this up, I see that Hugh is being a bit quoted out of context on Quoteoftheday. His full point is more complex. (Or less clear...) Lo: (like usual, italics is quoted text)

"29. Whatever choice you make, The Devil gets his due eventually.

Selling out to Hollywood comes with a price. So does not selling out. Either way, you pay in full, and yes, it invariably hurts like hell.

People are fond of spouting out the old clich about how Van Gogh never sold a painting in his lifetime. Somehow his example serves to justify to us, decades later, that there is somehow merit in utter failure.

Perhaps, but the man did commit suicide. The market for his work took off big-time shortly after his death. Had he decided to stick around another few decades he most likely wouldve entered old age quite prosperous. And sadly for failures everywhere, the clich would have lost a lot of its power.

The fact is, the old clichs work for us in abstract terms, but they never work out in real life quite the same way. Life is messy; clichs are clean and tidy.

Of course, there is no one true way. Whether you follow the example of fame-and-glamor Warhol or poor-and-miserable Van Gogh doesnt matter in absolute terms. Either extreme may raise you to the highest heights or utterly destroy you. I dont know the answer, nor does anybody else. Nobody but you and God knows why you were put on this Earth, and even then

So when a young person asks me whether its better to sell out or stick to ones guns, I never know what to answer. Warhol sold out shamelessly after 1968 (the year he was wounded by the gunshot of a would-be assassin) and did OK by it. I know some great artists who stuck to their guns, and all it did was make them seem more and more pathetic. 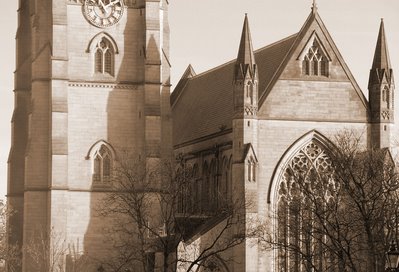