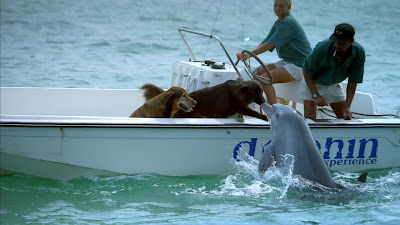 Dolphins rock.
----
bruce said...
A first impression is that the dolphin and dog are touching. Don't think so. Looks more like it was shot with a telephoto and the dolphin is in front of the dog. Hard to estimate the actual distance that they were apart.

"The only thing you can do, I think, is write stuff you _are_ passionate about, and hope that you can get an editor, and then a lot of readers, passionate about it too. Of course you make it as accessible and clear and entertaining as you're capable of making it -- you always remember that you work for the reader, not vice-versa -- but you're only going to get real voltage across the gap if it's a story that grew up out of your own perspective and tastes."

"Keep in mnd that the hinge of the story, the thing you lead up to and then away from, is the desperately hard choice the character (or several characters) will be forced to make."

I've just watched 300 in HD.
No doubt, it's a great looking film. Very abstract, hardly anything but the humans are filmed, most of it is done in the computer, and well.

Frank Miller (who wrote the comic that the film is based on) says that "there was no way of telling the story of 300 without it being amazingly brutal." Clearly he is trying to justify the dozens and dozens of very graphic beheadings and skewerings in the movie. But really, is this not why he chose this story? Quick, mention a Frank Miller story without violent deaths in it.

I'm not saying that this a wrong or that this kind of film "corrupts our children". I'm just saying keep a perspective about what kind of film it is. You won't learn much history from this film (as they freely admit), and it's not a great drama or an intricate story. Basically what it has going for it is two thing: eye candy (including a few titties, which I'm all for), and lots and lots of hard violence. I think it's indicative of how important the violence is to the movie that every skewering is accompanied by CG blood flying towards the camera. Even the titles after the movie have blood flying everywhere.

I like this review. "For a movie that has such intense, and cartoony (not to mention borderline ridiculous) gore the film is far too self-serious." It's true. The film tries to make every single scene and line of dialogue bombastic and dramatic, and it's just silly.

Joe sez:
The movie had some of the same flaws as Steven Pressfield's novels about the Spartans, in that it gave them a nobility that they lacked in reality. I mean, here we have a warrior society that existed only because they had enslaved an entire people, whom they were encouraged to hunt for sport.

Yes. I love that they regarded other peoples as "barbarians", when they had one of the most barbaric cultures ever.

The whole thing is bad exploitation. What's the good kind? Something like Kill Bill or Jackie Brown which are inspired by exploitation films and have fun with it. They're partly self-parody.

300, however, I found to be grotesque. It is intended to appeal to that kind of guy (the violence), and the bodies of the men are there to keep the ladies interested. You wouldn't get that if it they were covered in armour.

And the gays! Lots of hot male bodies, has to be said.

Still, it is a lot better than Beowulf, which looks like a piece of crap.

I agree, what I've seen looks like a video game. Very disappointing, since it's a Neal Gaiman story.

The 300 film and documentaries make like the Spartans were fighting for democracy. Which is BS. There was zero democracy about Sparta.
Pascal says:
... from what I know, democracy was invented by Athens, the sworn rival city of Sparta. And eventually, in spite of all that tuff attitude of the Spartans (who gave the weak-looking of their newborns to the wolves!), Athens won the conflict. On the battlefield...
Posted by Eolake Stobblehouse at Thursday, November 15, 2007 15 comments: 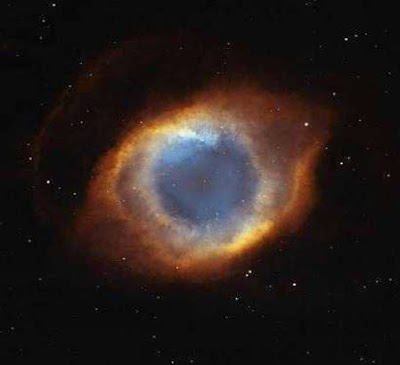 This is a neat photo.
(Mega-version.)

I wish people would send out neat things, though, without accompanying them with dumb chain mail text like:

"Subject: FW: NASA Photo! Dont Delete! Dear All: This photo is a very rare one, taken by NASA. This kind of event occurs once in 3000 years. This photo has done miracles in many lives. Make a wish ... you have looked at the eye of God. Surely you will see the changes in your life within a day. Whether you believe it or not, don't keep this mail with you. Pass this at least to 7 persons. This is a picture NASA took with the Hubbell telescope. Called "The Eye of God." Too awesome to delete. It is worth sharing. During the next 60 seconds, Stop whatever you are doing, and take this opportunity. (Literally it is only One minute!) Just send this to people and see what happens. Do not break this, please."

And of course when the email text says "This kind of event occurs once in 3000 years," this is BS. It's a picture of a nebula (the Helix Nebula), not an "event". For all human purposes, nebulae are static.

----
I just noticed that I have used 99 megabytes worth of images on this blog so far! And I'm quite selective.

God is in the details

One of the things I like about Apple's products is the attention and fun they put into the details.

An example is that with the newest system, if you take a screen shot of part of the screen (ctrl-shift-4), then small pixel coordinates numbers appear along with the cursor crosshairs so you can see exactly where you are on the monitor.

Another example is that in the widget World Clock, if you change time zone in a clock (you can have many, in different time zones), then the time does not just change instantly, the hands of the clock wind back fast, then slow down and settle on the time of the zone you selected. Beautiful details.

... Of course there are still bugs, though. For example it irritates me that while folders' icons on the desktop nicely show how many items are in the folder, this number does not always update when an application adds or removes items. And sometimes the number is just wrong.
Posted by Eolake Stobblehouse at Wednesday, November 14, 2007 31 comments:

This morning at 7.30. Looking east (notice the birds): 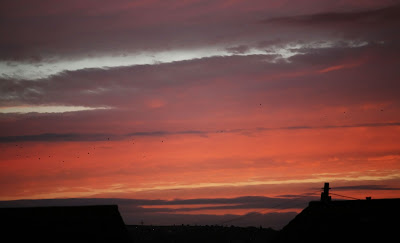 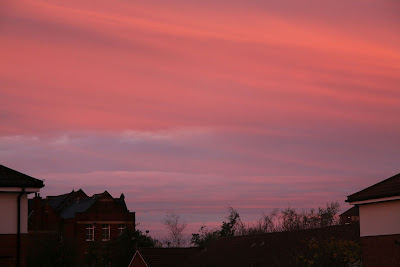 "Part of me suspects that the anxiousness of shoppers to buy the very best camera possible—down to fractional measures of obscure capabilities, and shouting matches online with recalcitrant jerks who just refuse to see the superiority of one choice over another—comes down to insecurity."

I'm totally with Mike on this one. I always long for the perfect camera, and I've used more money on cameras than I care to reveal, but I've also taken some pictures I love on recyclable cameras, of all things. You know, the little paper/plastic things costing barely more than a film. 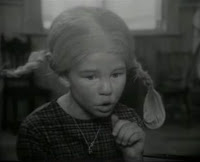 Also fun for fans: screen test of Inger, from before the production started.

I think Inger was for Pippi what Clint Eastwood was for Dirty Harry: born for the part and a very big part of why it became a classic.
Posted by Eolake Stobblehouse at Wednesday, November 14, 2007 14 comments:

War Is A Mind-set

War Is A Mind-set, article.

"In certain cases, you may need to protect yourself or someone else from being harmed by another, but beware of making it your mission to "eradicate evil," as you are likely to turn into the very thing you are fighting against. Fighting unconsciousness will draw you into unconsciousness yourself. Unconsciousness, dysfunctional egoic behavior, can never be defeated by attacking it."

"...of all the enemies of liberty, war is, perhaps, the most to be dreaded....No nation could preserve its freedom in the midst of continual warfare." ---James Madison

I've just found out, to my great and pleased surprise, that HD DVD is region-free. What made them make such a sane decision? Thank god for the small favors. :)

One reason I'm happy for this is that Blade Runner on HD DVD is £18 from Amazon UK. And the US "Ultimate Collection" on HD DVD is $28. That's about £14, so that's five disks for less than what I was about to pay for one disk. (OK, then there's shipping, but still.) (Oddly enough the "Ultimate" collection is available in the UK, but only in regular DVD version.)

... Oops, I see now that what I'm getting is the "Complete Collector's Edition". The "Ultimate" one comes in a small suitcase and contains stuff like a letter from Ridley Scott and a small paper unicorn. Frankly I don't know that I'm that much of a geek and a fan, even though it's one of the best movies ever.
Posted by Eolake Stobblehouse at Monday, November 12, 2007 8 comments:

It's over two years ago (three?) I saw an article on the same site warning about this happening. But I guess those in charge of financial institutions don't read Motley Fool. I think they should.
Me, I think the overdue housing crash will follow now, in many countries.
Posted by Eolake Stobblehouse at Monday, November 12, 2007 2 comments:

Does it harm you to "miss out on childhood"?

Personally I think the basic answer is that this child genius would be harmed by being forced to have a "normal childhood" if he does not want it. Just as much as a child would be harmed by being forced to forego a childhood he wants. I think one of the most holy and absolute principles in life is that every person must make every decision in his own life.
Posted by Eolake Stobblehouse at Sunday, November 11, 2007 26 comments: