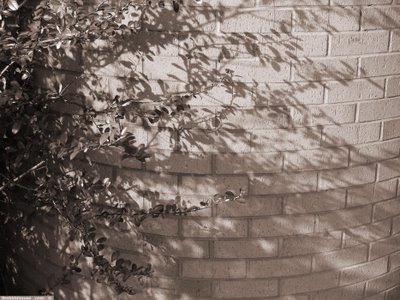 Posted by Eolake Stobblehouse at Saturday, March 25, 2006 No comments:

In Praise of the Superzoom

I have just written this article on "super-zooms", in particular the Nikkor 18-200mm VR, which I feel is a bit of a breakthrough. Tell your friends.
Posted by Eolake Stobblehouse at Saturday, March 25, 2006 No comments:

The Devil, Virginity, and the Nikon F2 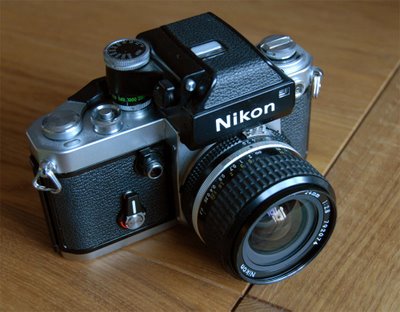 Hannah wrote: "What's the camera sitting next to you on the desk?"
Well, that is my excuse to mention this. That's a Nikon F2 (Photomic)
This was the Ultimate Camera for many, in the seventies when I started photographing with great enthusiasm at 14. It was the one all the pros used.
I don't use film cameras anymore, but I bought this last year just to have on my desk, because to me this is beautiful.

In high school I wanted one of these so bad that I made a pact with the devil: I would stay a virgin for ten more years, and in return he would provide a Nikon F2.
Well, that'll teach me who to deal with: ten years later I still had my virginity, but no Nikon F2 anywhere to be seen.

(In truth the cameras I actually did get, Konica TC and later Pentax ME Super, were the right ones for me. They were automatic and compact. And very good.)
Posted by Eolake Stobblehouse at Friday, March 24, 2006 10 comments:

I just answered a telephone survey, and one of the things they asked me about was mobile phones.

I said no to most of them, as my mobile phone is just for emergencies and the odd call/text message.

After going through all the different ways, the girl says, "Is there any other way you use your mobile?' "Yeah, I use it to call and talk to other people. You know, like a phone." She went silent, and then said, "Oh... Right...that's not on the list, I'll put that under 'other'.
Posted by Eolake Stobblehouse at Friday, March 24, 2006 7 comments: 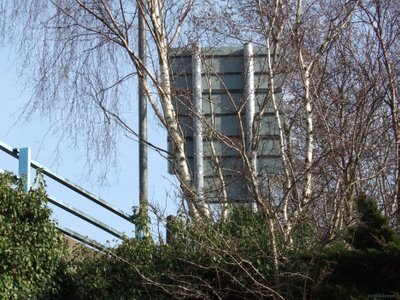 On the way home today from lunch break (working from home and being my own boss I take looong lunch breaks) I shot a few thingies with my likkle pockit camera. (The display is hard to see in sunshine, one of the things they have to fix yet.) A neighbor walked by, maybe he thought I'd cracked, photographing all this nothing. But actually to my surprise I really like this picture. I-don't-know-why, as Daphne says.
The Fuji F10 has a funny sharp-but-soft quality about highlight details that I like very much. See a huge version of this photo.
Posted by Eolake Stobblehouse at Thursday, March 23, 2006 2 comments: 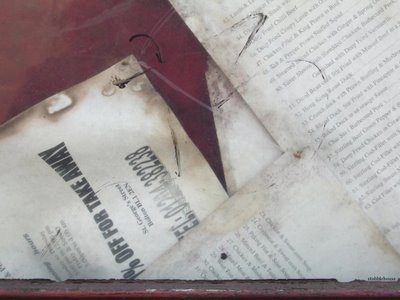 This from a wall display on a late chinese restaurant in a building which has been condemned the past five years.
As usual, click for larger version.
Posted by Eolake Stobblehouse at Thursday, March 23, 2006 1 comment:

Okay, I have just watched Broken Flowers by Jim Jarmush. Several items about it to follow.

Item the first: I found it by looking for more films to see with Tilda Swinton. Being done with it, I suddenly thought: Hey, where was Tilda?! I had to look up the film on IMDb.com to find out who she played! Now that there is an excellent actress.

Item the second: There is a brief but nice nude scene, which is DOMAI-like in that it is very non-sexual, and the girl is just totally relaxed and innocent about it.

Item the third: A camera nerd is one who freeze frames DVDs to see what cameras people use. Jim Jarmush uses a Contax T3. Very nice.

Item the fourth: I enjoyed the movie a lot, but the ending was a letdown. Note to film makers: if you are not going to reveal the mystery in the end, it is cheating to put up a mystery in the first place.

Item the fifth: I like Jarmush' way of interspersing scenes which don't forward the story much, but add depth and time and scenery.
Posted by Eolake Stobblehouse at Wednesday, March 22, 2006 3 comments:

The speakers in the picture below are from DesignE.co.uk, and I am one of the first people in the world to get a set (the sixteenth buyer according to a highly placed source in the company), they are brand spanking new. These guys break new ground in speaker designs. Real solid wood for one thing, for another the spherical design which helps both sound and looks, and I think they were the first to use that.
I have had them a few months now, and I am very pleased. They have a relaxed, well rounded sound, and everybody comments on the design.
Sometimes they play from the Mac behind me, but most of the time they play from the black iPod you can see, also behind me. It gives a full sound that I can't differentiate from a full scale CD player, and it holds currently 3,000 songs! I can control it with the tine white Apple remote you also see on the table.
Posted by Eolake Stobblehouse at Wednesday, March 22, 2006 No comments: 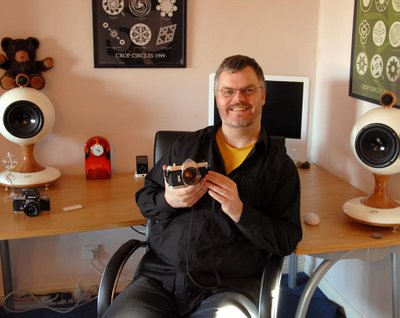 One of my readers sent me a birthday present (March ninth), a vintage SLR camera: a Pentax Spotmatic from the sixties, including two lenses and several filters, and a custom case!
I am not an ardent collector, but this is a beautiful camera, and a classic. It's one of the best presents I've gotten in years. Thank you Don! :)

Late update, March 2010!: Just looked at this post, and realize that for some reason I did not answer two questions:
1: The camera on the table is a Nikon F2 Photomic from the seventies.
2: The speakers are from a small company called Design-E. They sound good too.
[Update 2015: although their site is still running, both their phone or email are disconnected, so I guess I have speakers very few people will ever have! Sad.]

The Spotmatic sparked a collecting interest, and that table is now full of 'em, virtually.
Posted by Eolake Stobblehouse at Wednesday, March 22, 2006 14 comments: 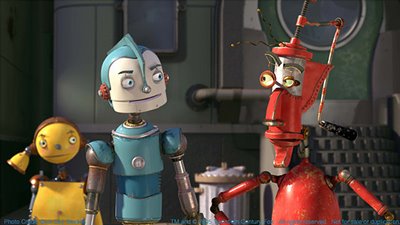 I am just watching "Robots", the computer-animated feature film with Robin Williams as one of the voices. I find myself saying what I say about many films these days: I love the visuals, but the story is a bit pedestrian.

This highlights what is so great about Pixar movies. (Monsters Inc, The Incredibles, Toy Story.) "Robots" is literal and obvious all the time. Take the title: "Robots". It is literal. The story mainly consists of "robot jokes". Jokes just based on the fact that the characters are robots. Pixar would have made far less obvious jokes. And they would have made the characters much more interesting, not cardboard. Sorry, tin plate.

Finally, "Robots" signals all its messages in huge, shining letters. When the characters have a "touching" moment, their face lights up in close-up, and "uplifting" movie music plays. Pixar movies don't hit the audience over the head.

Maybe I'll finish the film yet, since the visuals are so wonderful, and it does have the occasional amusing moment. And then maybe I'll rewatch The Incredibles.

Update: OK, half an hour into it: the "dance on the ballbearings"... it is absolutly priceless, and almost worth it by itself, even if it is only 20 seconds. Two robots slipping and sliding on a ton of ballbearings, set to music.
Also interestingly: this scene could only have been done in CG. It could certainly not have been done in live action. And not in claymation. And it would be very difficult indeed to do in 2D animation, with thousands of ballbearings zipping around, etc. I think this new medium is coming into its own.
There is another inspired clip, a ten second scene were a bunch of fighting robots spontaneously turn into a music video, complete with Oops I Did It Again by Britney Spears playing. Marvellous.
But GAWD, some scenes are syrupy! I think if I ever watch it again, I'll get diabetes.
Posted by Eolake Stobblehouse at Tuesday, March 21, 2006 4 comments: 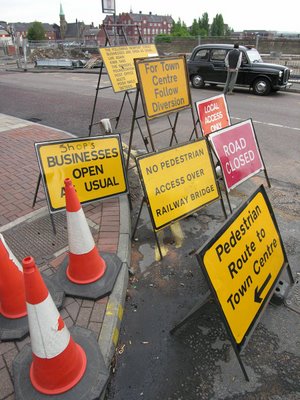 This picture, a few months old, (and along with the rat from today, see posting below) illustrates what a boon compact, always-with-you cameras can be. Something I've not often exploited in my life, but I'm starting.
These signs by the way are not a joke or a mistake. They were what the city deemed necessary to inform the public of roadworks. Sign of the times? Like excessive labeling, over-communicating in lieu of good communication?
Posted by Eolake Stobblehouse at Sunday, March 19, 2006 2 comments: