Internet movie watching forges ahead.
Why is it only the US which gets fantastic deals like this?
Posted by Eolake Stobblehouse at Saturday, May 24, 2008 4 comments: 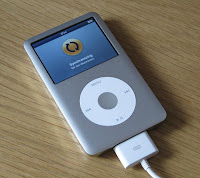 My old iPod (first generation which played video) has almost run out of space, and I decided to get a new Classic iPod. So I went to the online Apple Store UK and ordered one, including getting my email address engraved on the back. This was less than 24 hours ago, and here is the machine on my table. Man, that's fast service!

I wonder, though, why Apple still insists on the high-gloss backside on the iPods. Sure, it looks gorgeous when it's pristine, but it only stays pristine until after you've held it once.
Posted by Eolake Stobblehouse at Friday, May 23, 2008 15 comments:

Batman and Philosophy: The Dark Knight of the Soul

Batman and Philosophy: The Dark Knight of the Soul. Philosophical paperback.

Quote from the back cover:
"Why doesn't Batman just kill the Joker and end everyone's misery? Can we hold the Joker morally responsible for his actions? Is Batman better than Superman? If everyone followed Batman's example, would Gotham be a better place? What is the Tao of the Bat?
-- Batman is one of the most complex characters ever to appear in comic books, graphic novels, and on the big screen. What philosophical trials does this superhero confront in order to keep Gotham safe? Combing through seventy years of comic books, television shows, and movies, Batman and Philosophy explores how the Dark Knight grapples with ethical conundrums, moral responsibility, his identity crisis, the moral weight he carries to avenge his murdered parents, and much more. How does this caped crusader measure up against the teachings of Plato, Aristotle, Kant, Kierkegaard, and Lao Tzu?"

Isn't that just wonderful, Batman mano-a-mano with Kierkegaard. And mentioning Plato and Lao Tzu in the same breath as asking the immortal question "is Batman better than Superman?" Gotta love that.

Don't get me wrong, I've been a Batman fan for nigh 40 years. And there are legit philosophical questions he inspires, some of which were brought up in The Dark Knight Returns, for instance "are the authorities the ones we should follow and obey?" or "will violence and revenge solve anything?" (actually it seems Frank Miller pretty much takes for granted they will, so that one is mine), but this book just seems like it won't really delve into those. I could be wrong, it could be just the back cover text which is silly. It is actually written by professors and not comic book editors.
Posted by Eolake Stobblehouse at Friday, May 23, 2008 6 comments:

Pogue on the copyright issue

"What is the writer or musician to do, though, if she can't earn money from her art? Simple, says the Slashdotter: earn your money playing live (if you're one of those musicians who plays live), or selling T-shirts or merchandise, or providing some other kind of 'value-added' service. Many such arguments seem to me to be simple greed disguised in high-falutin' idealism about how 'information wants to be free.'

"…I think the Slashdot argument can actually be disposed of rapidly with one rhetorical question, as follows.

"Oh Mr. Freetard, you work as a programmer, do you? How interesting. So do you perform all your corporate programming duties for free, and earn your keep by selling personally branded mousemats on the side?

Seize opportunity by the beard, for it is bald behind.
-- Bulgarian Proverb

LOL. What the heck does that mean?

---
Your true value depends entirely on what you are compared with.
-- Bob Wells

I would have thought that that would be the relative value.
----
Update: Here's a funny one from today:

The fact is, the old clich%uFFFDs work for us in abstract terms, but they never work out in real life quite the same way. Life is messy; clich%uFFFDs are clean and tidy.
-- Hugh Macleod, How To Be Creative: 29, 08-22-04

I think it's a coding error of the accented é, but it makes it involutarily funny. "clich%uFFFDs are clean and tidy"...
Posted by Eolake Stobblehouse at Thursday, May 22, 2008 4 comments:

Chris Jordan quantity art.
Beyond the fairly blunt Socio-political messages, I just think some of the art is wonderful as art. 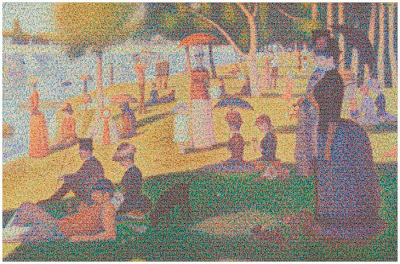 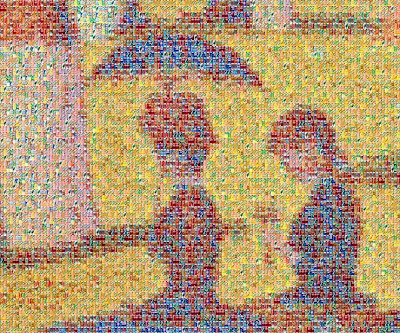 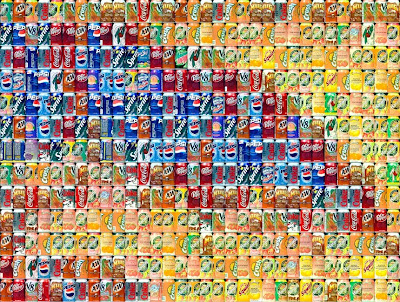 Elizabeth Barrett and Robert Browning sketch with Emma Thompson and Stephen Fry. You may have seen it before, I put it on youtube a year ago. It continues to be popular, and I don't get tired of it myself. I wish they had turned it into a movie, that would have been absolutely fentestically fentestic.
Posted by Eolake Stobblehouse at Wednesday, May 21, 2008 No comments:

Doesn't the answer-question format of Jeopardy seem like a pointless gimmick?
For one thing, anything which can be stated as answer-question can also be stated as question-answer.
For another thing, the "answers" are usually nothing like anything anybody would give as an actual answer to the "question". For example, when asked:

"Who is Madonna?"
Would you answer:
"Dad refuses to see a Guy Ritchie film because he's always had a secret crush on this 'Like A Virgin' singer."
?

Or when asked:
"Who is Shamu?"
Would you answer:
"Ice cream bars shaped like this celebrity cetacean are a special treat at Sea World."
?

I guess the format is there to trip up contestants. It still seems silly and gimmicky to me.
Posted by Eolake Stobblehouse at Wednesday, May 21, 2008 10 comments:

I love this song.

By the way, the last one I couldn't find as music file, so I saved the YouTube video via KeepVid. The site gives you an option of downloading it as "MP4 - High Quality". I did, and what's weird is that my downloaded MP4 version seems to have a better sound quality than the one I play on YouTube. How is this possible?
Posted by Eolake Stobblehouse at Tuesday, May 20, 2008 3 comments:

Like one could have predicted, "tube" sites inspired by YouTube are spreading like wildfire, particular pornographic ones. A new one is called YouFuckingTube.com... You think it may get a cease-and-desist from YouTube? :-)
Posted by Eolake Stobblehouse at Tuesday, May 20, 2008 5 comments:

I think somebody needs their math skills polished. It's four times the pixel count.

I don't think we need these displays for a while, but maybe there'll be a trickle-down effect for quality and price.

Oh, and my father had a standard line when seeing a picture like the above: "does it come with the girl?"
Posted by Eolake Stobblehouse at Tuesday, May 20, 2008 8 comments:

How to get drunk without drinking.
Or how to do voodoo.
The accompanying text to the second one seems to indicate that the writer thinks that a New Age believer is more vulnerable to the power of belief than others. But we all have beliefs, even atheists or skeptics have beliefs. Even if you choose to only believe what your eyes and hands tell you, that's a belief that you can trust that.

Jes said:
"This reminds me of something. When I was in the third grade, I used to get these pains in my hands and wrists. When I actually saw doctor about it, he couldn't find anything wrong with me. It turned out I was just imagining it."

Not just pain, but actual changes to the body, for instance blisters, can be turned on by a hypnotist. Makes you wonder how much of illness and suffering is actually caused by our decisions.
Posted by Eolake Stobblehouse at Tuesday, May 20, 2008 44 comments:

I've lost interest in politics, but this anthem has cute girls and a rocking melody, quite different fare from what you normally see in stuffy politics.

I just read in Total Film that the top grossing movie star now is... Will Smith!
Seriously? Will Smith? I can barely name any titles he's been in, in recent year. Except for Hitch, which I rented a few days ago, and gave up on after five minutes.
It's not that I don't like him, I think the Fresh Prince is all right (though with sometimes mediocre writing), and that he does solid work. I just had no idea that he's a huge star now.
Posted by Eolake Stobblehouse at Tuesday, May 20, 2008 14 comments:

How I Met Your Mother

So I tried "How I Met Your Mother". Man, was that lame! I can't figure out how it gets so many good viewer reviews. I have not been so disappointed in a sitcom since season six of Spin City. (That was when Charlie Sheen took over from Michael J. Fox, though it seemed that more than Charlie it was the writing that suddenly sucked.)

I bought this show because I love Alyson Hannigan, and because it has such great Amazon viewer reviews, presently 5.5 stars on average. I am just confused. This show just did not impress me in any way. I love sitcoms, I have like four shelf-meters of DVDs with just those. But this one not even Alyson could salvage. The actors did what they could, but the stories were run-of-the-mill, the writing uninspired, and it simply was not very funny.

Also the basic setup, where a guy is talking to his future kids about "how he met their mom", but it quickly becomes clear that we'll probably never find out who their mom is... not a good idea.
Posted by Eolake Stobblehouse at Sunday, May 18, 2008 19 comments:

Slide-under car door.
It sure looks cool and like it has a lot of advantages. Though it's hard to believe that it takes up as little space as they claim, and won't be very expensive.
Posted by Eolake Stobblehouse at Sunday, May 18, 2008 6 comments: