Imagine being so big in your field that you can go away for over a decade, and when you come back, not only are you remembered, but you have everybody's attention.

James Cameron's Avatar (trailer) looks to me a little comic-booky visually (once we get to the blue aliens in action), but I'll reserve judgment for now. Even if I'd rather shave a porcupine than watch Titanic, I respect him for Terminator I and II.

M Pipolo said:
What about that little 80s film -- what was it called -- "Aliens"!? ;) Very, very good as well.
Also, keep in mind that the rendering for the trailer was quite likely farmed out to a specialized "quickie" team, and there are still months of rendering to do on the actual film before completion. They have the two major effects studios working on it (WETA and ILM), as well as some smaller ones, and I hear it will still be a close call for its December release. 24 hours of rendering per frame per machine. :)
Apparently, those who have seen completed footage from the film say that we should not be judging it by the look of the trailer.

Alien too, yes. (Not Aliens Two, no.) I'd forgotten that was Cameron, not Scott. No wait, One was Scott, Two was Cameron. Admittedly it's been years, but I think I liked One better in this case.
3D, yes. I've never seen it! And certainly not in the posh new versions. It might get me out of the couch.

There's a likkle discussion on Mike's site about camera design and "wunderplastik".

It can be small things that make a difference. For instance the two versions of the Nikon F2 Photomic below probably looks the same to most people, but to me the lower version is far better looking.
I mean, to me it makes such a difference that I bought the second one on eBay just for pleasure of having it on my desk, but I wouldn't have paid a cent for the first one. 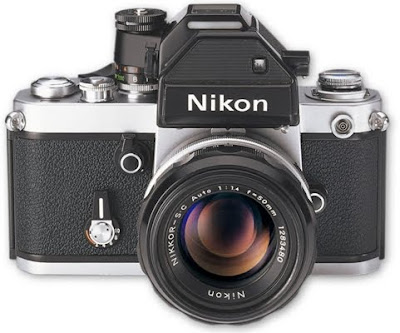 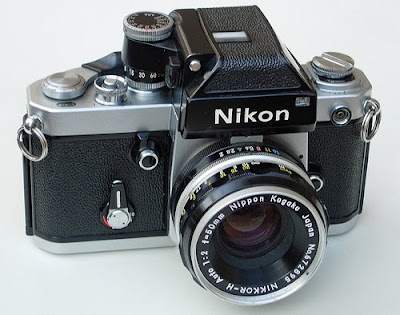 Steve White said...
"The plain prism F2 (no built in light meter) was the most beautiful of this series."

I have a weakness for the huge light-meter finders, but I can certainly see the argument for the other side. Very pretty too, and a more elegant beauty whereas the big-finder version is kinda "brutal". 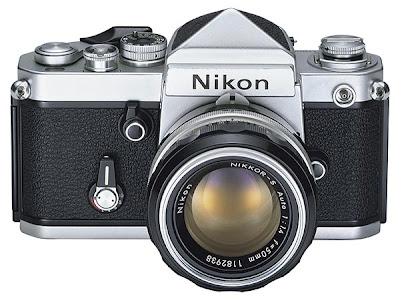 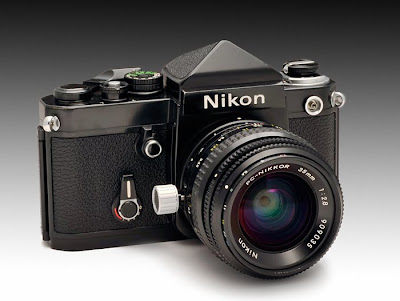 By the way, below is the F6, the film-model which amazingly came out as late as 2004, well after it was clear that film is moribund. (I'm sure it had been in development for many years, and probably Nikon saw it as a status thing to bring out a new pro film camera, to show they still take the old pros seriously.) I think it looks nice, and I'm sure it's an awesome camera. 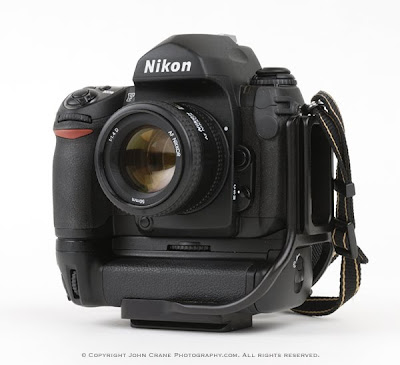 What is the third world?

Bert wrote to me:
Do find 20 minutes to watch this Swede shatter many common conceptions about the state of the world.
Made me applaud a couple of times (watching a video on my computer!!).

There is this version on TED's site, or this one on youtube, has better picture (helps with seeing his moving graphs). Seems to be roughly same speech, but recorded at different times/place.
Highly interesting. The world picture today is totally different than 98% of us are aware of.
Posted by Eolake Stobblehouse at Friday, August 28, 2009 4 comments:

Sony A850, and a New Price Barrier Broken

Sony A850, and a New Price Barrier Broken (on full-frame cameras), tOP article.
Last year Sony shattered the price on full frame high-res cameras (down from Canon's $7,000 to Sony's $3,000), and now they do it again. Heck of a bargain. In the US at least. Why is everything so much cheaper in the US? It seems to have become worse recently, with prices on many products being about the same number in Pounds Sterling as in dollar, despite the 1 to 1.6 exchange relationship in the currencies. (And in many cases the dealers are even forbidden to ship across the Atlantic.)
Posted by Eolake Stobblehouse at Friday, August 28, 2009 3 comments:

How to become a tech guru in ten minutes, flow chart, thanks to Eric.
Posted by Eolake Stobblehouse at Thursday, August 27, 2009 18 comments:

Ron also sent this, which has been circulating for a while, but it's really a very clever little bit of animation and bears repeating.

Animator vs Animation by Alan Becker. (Notice: the sound is very loud.) 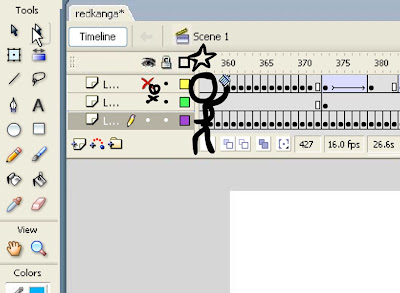 Dave points out there's a quite funny sequel. Hey, I found it it the original big format (Flash, not video). Mark II is longer, and has video controls, nice.
Posted by Eolake Stobblehouse at Thursday, August 27, 2009 1 comment:

(The video has a static picture, but a classic song.)

I've only watched half yet, but I gotta recommend Simon Pegg's Run, Fat Boy, Run (US link and UK link).
It's just a wonderful comedy and story on so many levels.
Posted by Eolake Stobblehouse at Wednesday, August 26, 2009 5 comments:

[Thanks to Uncle Ron.]
Biggest remote control plane I ever heard of, and it's a jet! (The video is a bit loosely edited, but hang in there, it does fly.) (Remember the HQ button, some of the new videos can get really big.)
Man, I think that thing could demolish a small building if it came down wrong.
Posted by Eolake Stobblehouse at Wednesday, August 26, 2009 4 comments:

This Tee is da bomb

[Thanks to TidBITS.]
One Apple geek tee-shirt feature the old-timey bomb symbol that Macs showed before OS X to hint that your computer had gone belly-up.

Apart from the (in retrospect) morbidity of the symbol, I find it amusing that you will not be allowed to board an airplane in an American airport if you are wearing this tee-shirt visibly. Seriously. Admittedly that's not a confirmed fact, it's an educated guess based on what kind of shirts people have been blocked for wearing. I know I wouldn't try it, these people have no sense of humor. 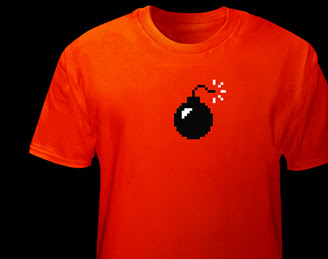 Montgomery Art is a daring and awe-inspiring new Fine Art initiative from our friend, LEGO enthusiast Alex.
Apart from him coming dangerously close to revealing personal details about one of his models, I have a very good feeling about this new gallery, and I think it could become very successful. You heard it here first.
Posted by Eolake Stobblehouse at Monday, August 24, 2009 11 comments:

What is a browser?

In the mid-nineties, an anecdote made fun of one of the Spice Girls, I forget which. She saw a computer with a web browser on it, and she said: "Can I have that? Can I have an Internet?"

This video shows that a minority of people using the Internet knows what a "browser" is. They often confuse it with a search engine. TidBITS has an article commenting.

Years ago I was in a writers' group, and I made a satirical poem about technology. Despite the fact that at that point I was a newbie myself, and despite that I deleted words which I thought the broader audience might not know, the poem caused massive confusion in the group, they hardly knew any of the terms I'd used.

Neeraj said:
About two years ago some so-called "child reporters" asked our top politicians about "internet" (see youtube, of course in German).

One of the questions they asked our minister of justice (Brigitte Zypries) was:

"Which browser do you use?"

Her answer was, after some hesitating:

"Browser? What is a browser?"

Since then, the question "What is a browser?" is a running gag all over the internet communities in Germany.

One suggestion is, that she has thought about a shower head, because in German it's also called "Brause".

She may also have thought about sherbet, because that is also called "Brause" in German.

(Together with the other answers it shows that our politicians have no understanding at all about internet, but sadly they decide about it's future, mostly by trying to keep it under control, which leads unavoidably to censorship ...)
Posted by Eolake Stobblehouse at Monday, August 24, 2009 39 comments:

I love this quote:

"Modern Art is what happens when painters stop looking at girls and persuade themselves that they have a better idea." - John Ciardi

---
The irony of course is that Sturgeon's law (“Ninety percent of everything is crud.”) notwithstanding, I do like "modern art".
But I also like the kind of art "where you can see what it is supposed to be". And I remember as a young man I was pondering, what's the perfect subject?
Well, a living subject compels more attention than a non-living one.
And one's own species compels more attention than others.
And, well, girls are just prettier. :-)
Posted by Eolake Stobblehouse at Monday, August 24, 2009 15 comments:

I must have a dozen versions of Iko Iko on my iPod. Cyndi Lauper's version (below) is one of my faves.
But some of the lyrics don't make no sense. Especially "Jockomo Feenanay".
There are many different interpretations/explanations, but the one I like best is:
"“Jockomo Feenanay” is a chant used by the Mardi Gras Indians, African-Americans who dress in creative adaptations of Native American costumes. Jockomo Feenanay is Creole dialect for a French phrase, which means, “Every day is New Year’s Eve.” Jockomo Feenanay relays the essential message of Carnival: every single day brings us new opportunities to appreciate life."
-


Here is the (or an) original version.
Posted by Eolake Stobblehouse at Monday, August 24, 2009 No comments:

David Pogue talks about low-light compact cameras. New ones I haven't even heard of yet.
Don't miss the funny video. (Get in on iTunes in high rez.)
Posted by Eolake Stobblehouse at Sunday, August 23, 2009 1 comment:

Talking about complimenting, how about Operation Beautiful?
Posted by Eolake Stobblehouse at Sunday, August 23, 2009 1 comment:

Strange ad concept. Fuzzy, you might say. Or not much, really. But well, they are getting a bit of fuss over it. 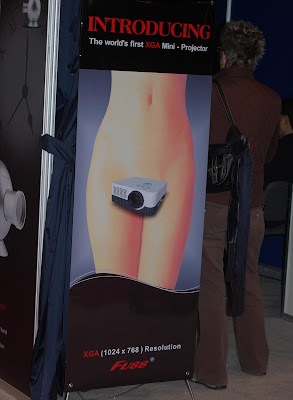 Prefixes they should teach everyone in school:

For EVEN bigger or smaller numbers, I think we can use digits for the very rare occasions. :-)
-
Posted by Eolake Stobblehouse at Sunday, August 23, 2009 1 comment: 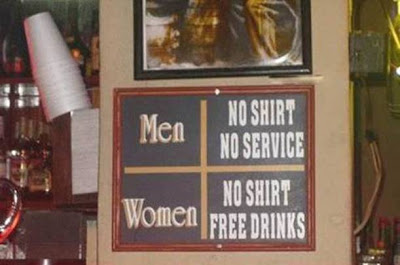