Here's an interesting little story about discrimination (and how it's changing).
Posted by Eolake Stobblehouse at Saturday, June 02, 2012 3 comments:

I agree with Jordan Steele's review:

At $299, the HLD-6 isn’t the cheapest accessory on the market.  You will certainly need to weigh its advantages against the larger size and cost of the grip.  However, if you want a more comfortable and secure grip, longer battery life and the ability to shoot verticals in a more natural position, the HLD-6 is a very well made product, with a wonderful two piece construction that allows you to choose how you want the camera to handle.  The well thought out control placement and solid build make it worth the price in my opinion.

(I think this picture speaks for itself. Of course the grip adds bulk, but...)

Here in the UK, the grip was included promotionally with the OM-D. Lucky us.

I've only ever once before had a camera with a vertical grip, and it was the Nikon D2x, which was the size of the Canon 1Ds seen above. A brute to log around. And I found that using the vertical grip did not in fact improve the certainty of my grip, oddly. I don't know why, if it was because it was rounder or that the camera was much heavier. But in any case, with the Olympus grip, it's different, I do get a wonderfully certain grip vertically.
And I have never taken many vertical pictures, it's just so awkward normally. I think this grip might change it.

Just like the camera, it's a beautifully made product, it feels good in the hands and the controls feel solid.
The vertical part of it (which is separate) includes not only duplicates of both the top dials on the camera, but also two function buttons! Excellent.
Ah, one detail though: when the camera is held vertically, the information on the screen or finder does not changed, so you have to read it sideways.

Sure it adds bulk, but again, compared to conventional (D)SLR camera products, it's only about half the size and weight.

With just the horizontal part, it's still small and light:

Hack The Cover, long article about what to do with book covers in the digital age.

It has some interesting comparisons between Western and Japanese books. And a few examples of the rare outstanding Western covers. Look at these, aren't they wonderful?

Bert found this article about super-macro photography. It takes specialized lenses and tool, and a lot of work and patience.

Micro-photography is photos taken through a microscope, of things so small we can't really see them with the naked eye. Whereas macro photography is super-closeup photos, lying between what a camera can normally do, and micro-photography, generally of subjects smaller than the sensor (though this is based on 35mm photography, so equivalent to a "full frame" sensor, 24mm x 36mm.)

Most "macro lenses" only go to 1:1 with the built-in focussing, but you can get rings or bellows to put between the camera and lens. The mere extra space focuses the lens much closer. Technically you can use a normal lens also with these things, but it's not optimized for macro distances, so the pictures won't be very sharp. 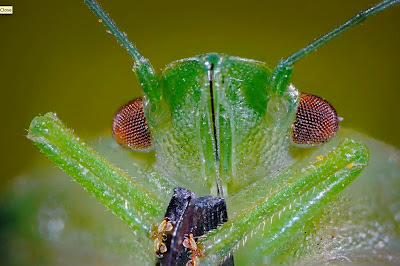 The reason for the many combined frames (done in the computer with special software) is that one of the big challenges of macro photography is the super-duper-narrow depth of field.
Posted by Eolake Stobblehouse at Thursday, May 31, 2012 7 comments:

Ziggy is the dog. She is three years old, they don't get any bigger (spaniel, I forget the exact breed). She belongs to my friend Judy and Jade.
The woods were full of these tiny (most less than 2cm) caterpillars hanging on their strings. They were everywhere, and mostly just seemingly doing nothing, we couldn't really figure out where they were going or why. When I went off-path to photograph the gnarly tree, I immediately got 4 or 5 on me, that's how many there were.

Oh, by the way, I only got lucky with one or two shots of the dog, out of over a dozen I took, where the dog had already turned away before the shutter reacted. Reaction speed is still a downside to pocket cameras, even though it has improved. For pets or children etc, a bigger camera with speedy autofocus is recommended. (The newest Olympus or Panasonic M4/3 cameras are now almost instantaneous, a performance which used to be limited to the bigger DSLR cameras.) 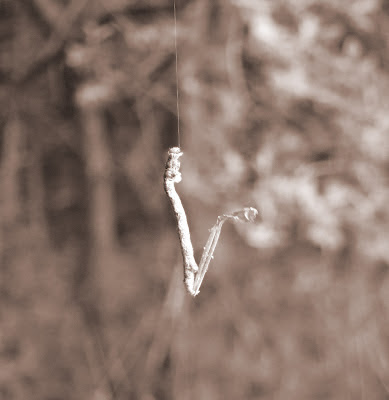 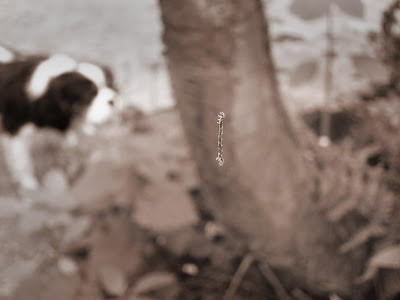 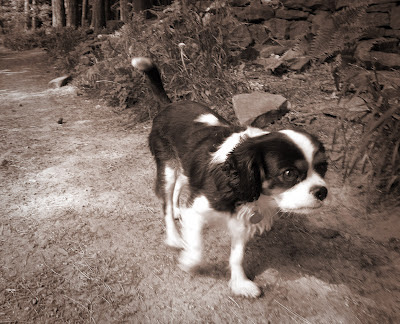 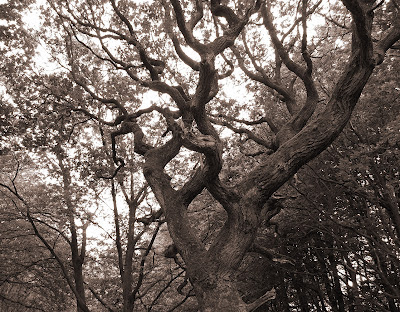 The curse of acne

It's unbelievable, she's like two different creatures.
And how brave to do this.

How bizarre: Japan is behind the west not only with social media, but also with smartphones. It's only now that iPhones etc is starting to take off there.
I wonder what could cause this? They love gadgets, love Apple products. And they even have a whole sub-culture of short novels written specifically to be read on mobile phones! Because they're packed like sardines on the trains, see, no space for a laptop, maybe not even an iPad. So smartphones should be a perfect fit there. (It seems Kindle has not yet been launched in Japan though it should be close.)
I'm sure it'll come fast. If they like reading on a crude Nokia display on the subway, just wait til they try it on the high-rez display on the iPhone 4.

The only thing that scares me more than space aliens is the idea that there aren't any space aliens. We can't be the best that creation has to offer. I pray we're not all there is. If so, we're in big trouble.
- Ellen DeGeneres
Posted by Eolake Stobblehouse at Monday, May 28, 2012 1 comment:

A cartoon project, Fox and Bigfoot

I love her posh brit accent, just perfect. How do they do it?

The project.
Posted by Eolake Stobblehouse at Sunday, May 27, 2012 3 comments:

[thanks to tOP]
John Slaytor found a way to deal with the Street Photographer's Dilemma: how to get good, intimate pictures without risking getting popped on the nose. He photographs through the window of a moving train. Got some very good, spooky pictures too. 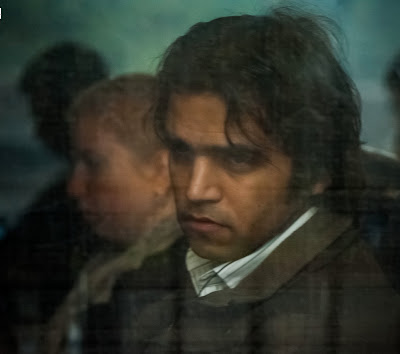