I'm pleased with the entries so far. It'll be a nice gallery of the finalists/winners.

I want to also post it in a photo gallery form which will make it  easier for visitors to enjoy the works in near-screen-size. I am considering just using Dropbox, which has improved its gallery functions recently. But maybe somebody has alternative suggestions?
Posted by Eolake Stobblehouse at Saturday, July 14, 2012 2 comments:

A comic on superhero movies

Fun little comic which discusses the appeal of superhero movies. I like the art, funny and lively.
(In large, beautiful PDF version here.) 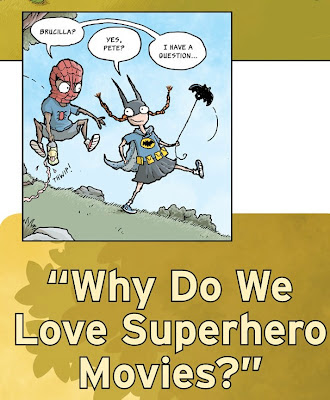 Posted by Eolake Stobblehouse at Saturday, July 14, 2012 No comments:

Kickstarter comes to UK soon. That's cool.
Also, they've become a major force in the publishing market. Here's an article from The Guardian.
Not all of Kickstarter's comics projects are graphic novels, but the majority are. Even with these caveats, Kickstarter is in the conversation for the number two publisher of graphic novels. Clearly, crowdfunding is making a huge impact in the graphic novel market," said Publishers Weekly. [...]
"I really like pre-selling things as a way of bringing them into the world – it means we're making enough for the people who want them, we can afford to make them as well as we want, and it means that people are getting something real. We aren't worrying about marketing costs. We don't have to get a record label, and then try to persuade them to make the thing we want. We just do it," Gaiman has said.

Couldn't agree more. Crowd-funding is a hugely exciting invention which is levelling the playing field more than anything else since the Web itself.
Of course I'm sure most Kickstarter projects are less successful than, say, Amanda Palmer's record, as is true in all the world, and I have a sneaky feeling we will never actually find out the real causes of what makes one a flop or a hit. I also have a feeling we will never stop trying!
Posted by Eolake Stobblehouse at Friday, July 13, 2012 2 comments:

Matt has made a new dancing-around-the-world video.
I think I may like the outtakes video better, actually. It even has Copenhagen in it.
David Pogue interviews Matt (again).

(Sarah seems to think you need to hold it in your hand all the time instead of using a clip or a pocket. Maybe this was an earlier model.)

The iPhone Swivl
Posted by Eolake Stobblehouse at Wednesday, July 11, 2012 No comments:

Overworked Eyes, article.
In an effort to reduce the amount of energy consumed, screen manufacturers use very narrow bands of the visual spectrum to light the screen. Combined with overhead fluorescent office light, the harsh artificial light is far from full spectrum daylight that the eye likes to see.
[...] Dr. Anshel suggests, "Make sure you have your computer far enough away to comfortably see it. Ideally, the center of the screen is 7-10 inches below your horizontal line of sight. Move your lights to where they don't cause any glare and to where you don't have any bright objects, like a window, in your field of view when viewing the screen." He also suggests a series of breaks during the workday. The smallest should occur every 10 minutes and can be as short as 10 or 20 seconds. To properly relax the eye muscles, you must look at least 20 feet away. At least once each hour, take a bigger break that includes standing and stretching.

I have found that reducing contrast helps. Computer-, TV-, and tablet-screens should not be much, much brighter than the room. So turn down the brightness of the screens (since a while now I have my big computer screens at about 50% setting), and adjust the room light so there's not a big gap in brightness.

Also, like they say, variation is important. Don't glare at the same screen at the same distance for hours at a stretch. Break it up with breaks or with other things you need to do, where you use your eyes differently.
Posted by Eolake Stobblehouse at Monday, July 09, 2012 No comments:

Railroaded into Swedish prison by Big Content, article.
and then a trial that included a judge and multiple jurors who were literally getting paychecks from the large copyright industry associations.

"Big Content", I haven't heard that before, but it's a useful term.
I remember from a pre-Internet book, the main character was offended by the use of the word "content" to refer to the foodstuffs inside tubes or boxes. He said: "at least nobody yet has had the sheer brass balls to refer to artistic creations as 'content'." Well, he didn't have long to wait. Citizen Kane and Hamlet are now officially "content".
Posted by Eolake Stobblehouse at Sunday, July 08, 2012 No comments: