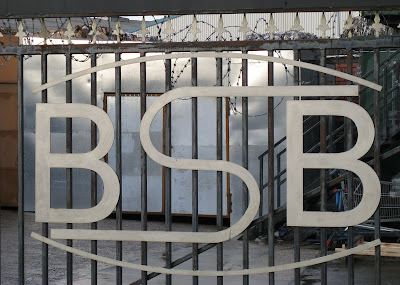 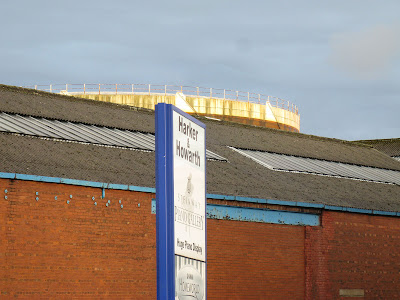 I've heard of high speed cameras, but this is ridiculous.

Quoth TTL:
I don't see what's ridiculous about this.
High speed photography is a must in scientific visualisation in many fields.
It's used a lot in Hollywood too.

It seems I was not being clear. "... but this is ridiculous" is a humorous expression meaning "this goes beyond anything I imagined."
Posted by Eolake Stobblehouse at Saturday, March 08, 2008 4 comments:

Coincidentally, I'm just watching two comedies in a row with a similar theme. They are Failure To Launch and You, Me, and Dupree. They are both quite entertaining, though the first one is not exactly the most believable film I've seen.

The theme in common is not uncommon: somebody living with somebody, pretty much sponging off them, and it's a problem. In the first one it's about an adult man still living with his parents, and they are fed up. In the second one it's very immature friend moving into the house of his newly-wed friends "just for a couple of days", and totally taking over the house and not in a good way.

When I see such things, and I guess it kind of happens in real life too, I just don't get it. What's the problem, just throw his ass out! How can you let somebody walk all over you like that?
Posted by Eolake Stobblehouse at Saturday, March 08, 2008 2 comments:

Oops, it's Pogue day today. David writes about the Sony A300. It seems Sony is the one to make live view really usable.

I wonder how much money and bulk they could save by doing away with the viewfinder altogether?
Many photographers, especially old-time ones, won't hear of that. But I wonder how much of that is just habit? When I use a digital compact, I never use the viewfinder, I use the screen. I feel it helps me see the composition in relation with the frame, something that's easy to overlook in a viewfinder (which is why so many pictures have too much background around the main subject).
I suspect that if cameras had always had screens to use for composition, and somebody now brought out a camera where you had to press it against your face, nobody would use it. :)
Posted by Eolake Stobblehouse at Friday, March 07, 2008 4 comments:

Pogue on being cautious

Pogue post on caution.
Quote:
"Next week: a letter from a reader who’s angry at Microsoft because he lost his entire 800-page novel when the PC crashed. (He’d been planning to hit Save when he got to the end.)"

Yep. Since I first started using computers, I've been compulsively hitting Save every couple of minutes.
I was once in a cafe with a friend of mine, he was writing an article for one of my sites. He'd been writing for an hour, when I asked if he'd saved it yet. Nope.
I also once hit the circuit breaker in a company I worked at, and the secretary lost three hours of work. (I should have warned, but I did not know the board covered the other building too.)
---
Another good Pogue post here.
Caller: Hey, can you help me? My computer has locked up, and no matter how many times I type eleven, it won’t unfreeze.

Agent: What do you mean, “type eleven?”

It's very cool.
Posted by Eolake Stobblehouse at Friday, March 07, 2008 No comments:

I just got this from eBay. This is the Nikon F, the original professional "system camera". First came out in 1959, for lord's sake, it's almost a century old.
To me this is just a beautiful machine, both technically and aesthetically. 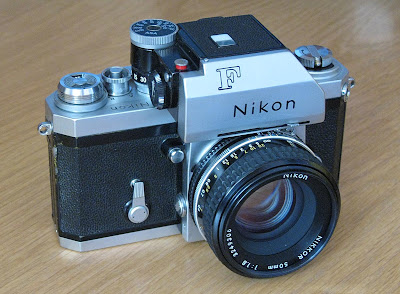 My sample looks different from the one on the wiki page, because mine has a viewfinder attached with a built-in metering system, which allowed reading the light through the lens and adjusting the camera directly to fit the metered light level, a brand new concept in the sixties.

Wait... (fetching calculator) (punching numbers for a considerable time) no, hahaha, I think I meant "half a century". Silly me. I hope nobody rushed out to get one in the belief that it's soon to be a genuine antique.
Posted by Eolake Stobblehouse at Thursday, March 06, 2008 5 comments: Andrew Loomis made some of the best books ever for teaching illustrators and artists. I have bought several of them on eBay, but for very high prices ($100-$250) since they are out of print. And this is a crying shame. So I decided today that I'd scan them some day and put them online.
So imagine my joy when I found out somebody has already done this.
Update: new page with the books.
If you know somebody who loves drawing, point them to this.
Posted by Eolake Stobblehouse at Thursday, March 06, 2008 16 comments:

This just occurred to me:

In the sixties, if you were not a non-conformist, you just didn't fit in.

Aaaaanyway...
Once back in school, in class somebody pointed out the old cliche that "there's a thin line between genius and madness". And somebody else said: "yes, just look at Eolake."

I don't recall how I took that, but I guess I should have taken it like a compliment. I was fortunate enough that my mother was of a bohemian bent. It's a less comfortable life, sure, but to me, trying to walk to the beat of your own drummer is the only satisfying life.

Note that I say "trying to". It is much harder than you expect. Like the joke about the sixties above, one often finds that when one has been thinking one was non-conformist, one has only been conforming to some other group's ideas and ideals.
Posted by Eolake Stobblehouse at Thursday, March 06, 2008 6 comments:

Australian real estate advisor Neil Jenman was warning about a global real estate crash already three years ago. To his credit, he is not crowing about being right, he is just trying to help the people who have been taken in.

The high cost and the stress of snobbery isn't worth it. Sell your home and move to the western side of the Pacific Highway (you know what I mean).

Get rid of the McMansion in Bella Vista Waters (seriously, there is such a place) and buy yourself a lovely home in a lovely street just 15 minutes away in Blacktown. Before you say, "I'd never live there," go and have a look at it. You can buy a great 4-bedroom home in a quiet street in a wonderful community for less than $300,000.

The price of pretending to be prosperous is very high - both financially and emotionally."
I agree. I live well below my means. If I had a big house and a big car, I may have some people who would look up to me for that, but those are not generally the kind of people I want to impress. I prefer the quiet satisfaction of doing well by doing good, no matter if it shows in my material surroundings or not.
Posted by Eolake Stobblehouse at Wednesday, March 05, 2008 2 comments:

Some photographers are terrorists...

Some photographers are terrorists... apparently.

Campaigns like this from the authorities make me want to puke. Like the US color-coded "alert" levels after 9/11, they do nothing except foster fresh paranoia.

I remember maybe twenty years ago, a Danish satiric cartoonist (the talented Nicoline Verdelin) made a strip where you saw two men dancing, poker-faced and very stiff, at arm's length. And somebody asked what that was, and the answer was: "two gays dancing in a British TV series."

Of course you could say the same thing about The L-Word. But that's with pretty women, so I quite liked that. :)

I'm just surprised, not complaining. Anything that breaks down more taboos, I'm all for.
Posted by Eolake Stobblehouse at Wednesday, March 05, 2008 6 comments:

This is a really capable and pleasant entry level camera. I have the D40, and that's ususually the one I reach for when I need a quick picture.

I was in town with Laurie Jeffery recently. He was carrying the D40x, which he has bought for his wife, Vicky. And not only has she gotten very active photographically after getting this camera, but he himself (a pro photographer) is quite impressed by it.
(The D40x was a small upgrade from the D40, and the D60 is a small upgrade to the D40x.)

Vicky was at a local Women's... er, convention/exhibition thingy, and that's where we went. Then we went to get lunch at our favorite Italian. And when we came back, we found out that in our absense, not only had the convention had a pole dancing demonstration, but it had been picketed by feminists who had been so disruptive that the police had been called. Dang, I wanted to see that.
Posted by Eolake Stobblehouse at Wednesday, March 05, 2008 No comments:

I think it could be used also for two writers writing together, not just editing. I once did that over text chat, much fun.
Posted by Eolake Stobblehouse at Wednesday, March 05, 2008 1 comment:

Where can you photograph

A new blog for information about public places (like parks) which are, or are not, friendly to photographers.
A very good idea.
I wonder, though, if a blog format is the best for this. If it catches on it can become very big indeed, and a blog is not designed to organize a lot of information.
Posted by Eolake Stobblehouse at Wednesday, March 05, 2008 4 comments:

Rinspeed sQuba. So somebody actually built a car which can also act as a submarine. It's either cool or silly, I'm not sure.

Before and After Magazine

Before and After Magazine.
A good resource for page design.
Posted by Eolake Stobblehouse at Tuesday, March 04, 2008 1 comment:

Wow, I must be doing something right: my birthday in not until the ninth, and I already got a nice card from one lovely woman, and these flowers from another. 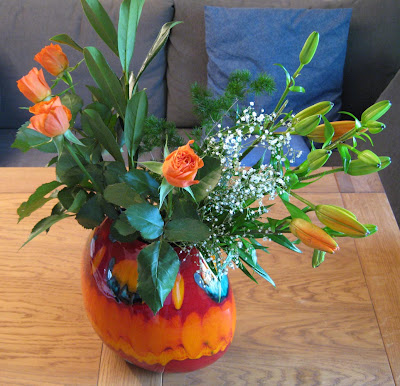 By the way, I think this is a pleasant little picture. I'd arranged it to get a calm background, and the colors gel nicely.

It was taken indoors without flash or tripod, with the Canon 960 and its image stabilization, at 1/20 second, which would have made it blurred without IS. It's great when you're able to do without flash, it usually ruins a picture. (At least the direct, on-camera flash does.)
Posted by Eolake Stobblehouse at Tuesday, March 04, 2008 6 comments:

Mac vs PC vs Linux

To add to the platform fun.

In Seth Godin's interesting essay collection Small Is The New Big, he tells about a woman he met in a small local bank branch. She's been a customer for 70 years. And the bank still checks her signature against the file every single time she comes in (every month).
Posted by Eolake Stobblehouse at Sunday, March 02, 2008 2 comments:

I've long held that The Sopranos is at its heart a comedy. It's a subtle one though. Below some quotes from just one episode in season six. Behold these wonderful linguistic misdemeanors...

"Lets dispose with the 500-pound elephant in the room."

"It's all the toxins they're exposed to. It fucks with their brains. Between the mercury in fish alone, it's a wonder not more kids are jumping off bridges."

"Every little problem, she is right there to pick him up and wipe off his tears on her apron strings."

"This alteration you had with him..."
Posted by Eolake Stobblehouse at Sunday, March 02, 2008 No comments:

Middle age hit quite suddenly in the past couple of years, and whereas close vision had previous been a strong quality of my eyes, now that's gone. So I struggle with small print. And in particularly I have a book want to read, but which has ridiculously tiny print. So I'm looking for an aid, like rectangular magnifying glass or something.
Any recommendations?
Posted by Eolake Stobblehouse at Sunday, March 02, 2008 16 comments: