Durnit, a pipe in my bathroom just sprung a leak. How come something like this, at least to me, always happen late on a Friday? Do the plumbers' Union have a special deal  with the Household Gremlins' Association or what?
Posted by Eolake Stobblehouse at Saturday, January 05, 2013 6 comments:

Here is a funny "what kids say" collection on grandparents.

A little girl was diligently pounding away on her grandfather's word processor. She told him she was writing a story.

Posted by Eolake Stobblehouse at Friday, January 04, 2013 No comments:


The latter project looks promising btw. The former does not have my interest, but the video is well made and a bit funny.
Posted by Eolake Stobblehouse at Thursday, January 03, 2013 No comments:

NASA's Cassini spacecraft produced this glorious backlit view of Saturn and its diaphanous rings, taken while the spacecraft was in the planet's shadow.

A satellite view of The Americas at night. The image was made up by data collected by the Suomi National Polar-orbiting Partnership (NPP) satellite. According to NASA, 312 orbits were required in order to get a clear shot of each parcel of the Earth's surface. Additionally, the image shows Hurricane Sandy making landfall over New Jersey, USA, on Oct. 29 2012.
Posted by Eolake Stobblehouse at Thursday, January 03, 2013 No comments:

---
One thing I didn't care for in the eighties was the over-use of makeup by singers and models. Unfortunately it seems to have returned recently. Fortunately not by everybody, but then some of them over-do it to a ridiculous extent. I mean color like like a carnival.

---
I remember a funny rumor in Australia in the seventies: that the pretty performers were just paid performers, and didn't write their own songs. Well, it's understandable to believe that that much talent and charm can't be all in one person  (or even four).

I still like Abba, though it's a little on the sweet side for me now. But I was a huge fan of them when I was a kid in the seventies, I think their first album (the one with the very funky painted cover of the four) was the first album I bought on my own (or maybe the first I'd wished for and got for xmas).

Update: Aha, TTL points out it was the Greatest Hits album:

I don't generally think technological progress has many victims in art, but album cover art is one of them. I think such things will only get a renaissance when big screens become really cheap and ubiquitous, so it's easier to enjoy high-resolution digital art. You could have a system of say ten big screens in your home, and control it from a tablet or PC, and have rotating art on them. I'm looking forward to that, actually, I've had the same framed posters on my walls for 8 years, and lord knows when I'll get around to changing them.
Posted by Eolake Stobblehouse at Wednesday, January 02, 2013 7 comments:

Camouflaged Animals in their Natural Environment

Posted by Eolake Stobblehouse at Tuesday, January 01, 2013 No comments:

2013, and we're still here. (Most of us, I had a couple of friends check out last year.) Have a great one, everybody.
Posted by Eolake Stobblehouse at Tuesday, January 01, 2013 5 comments:

It pays off to fiddle with the TV settings. I was wondering why the sharpening and contrast was suddenly way overdone. I looked at the Picture Settings, and for some reason, it had auto-selected a setting called "BD-wise" ("smart about Blu-ray Discs"?), which I'd not seen before, maybe the settings change according to which disc is in.
Most of the other settings looked equally horrible, (it probably had to do with this being from disc extras, filmed on ordinary video cameras) there was only one which looked much more soft and natural, called "movie". Lo this difference.
(The over-sharpening is more visible on the TV, the highlit hairs are really harsh.)

My new Samsung TV (3D) sadly doesn't have fine-tuning of all the separate options, unlike my older Sony.

BTW, it's a higher-end 3D TV model, active, high refresh rate, the glasses are light and don't bother me. Altogether quite nice, and so far I enjoy the experience on the few films I had with it. It's good fun.  I'm still not sure it adds anything really important though. But then again, it is pretty new (in the current incarnation), so maybe some interesting and inventive uses will develop with it as the years go by. Perhaps some uses which don't just use the two different views to replicate the third dimension...
Posted by Eolake Stobblehouse at Monday, December 31, 2012 No comments:

Are the tools important?

It seems I helped to start a debate on The Online Photographer about exactly how important the camera is for the results.
About the widely-used arguments that painters "don't argue about brushes", Mike added a post.

I think it's a never-ending argument, because it's so complex. Which specific tools for what specific use? Sometimes it's mainly a preference, like Canon Versus Nikon, other times there are specific differences, like a zoom versus primes for street shooting, but exactly how important those differences are to a person and situation, can be very hard to pin down.

Adding to the confusion, some like doing the art, some just like the tools, and some like both.
For example, both Mike and me have a great affinity for an excellent lens, even though we both admit that the differences in the picture rarely have much, if any, influence on how the picture is received by the public or buyers. They are usually only really visible to the trained eye. 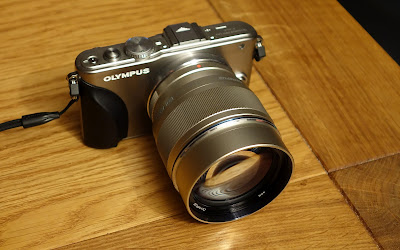