Curious paragliders, video.
Mostly just silly costumes. But I didn't know you could paraglide with a running start. And I was startled by the guy doing loops with a paraglider! And amazed by a paragliding 2CV. (You know, the French car.)
Posted by Eolake Stobblehouse at Saturday, August 15, 2009 4 comments:

What do you think, is this a good picture?
And if so, which version do you prefer, and why? 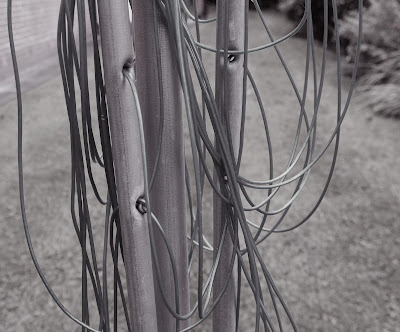 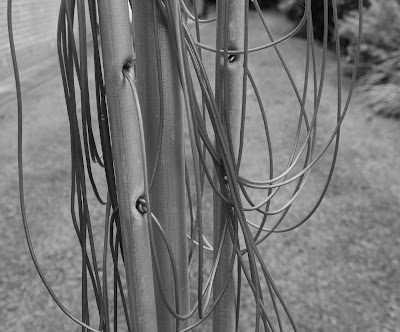 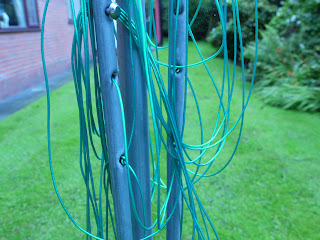 "It's no wonder I have always seemed so different from others. Actually I'm not an Other." - Bernie
Posted by Eolake Stobblehouse at Thursday, August 13, 2009 14 comments:

OK, so I gave my new e-bike a test ride today.
It's really good. Even before turning on the power, and despite the added weight of the battery (which one can remove if one wants to ride unpowered), it is an easier and faster ride than the last bike I had, which was actually a pretty goood one. Despite being solidly built, it feels like a racing bike.
When you turn on the power, that feels amazing. But that's something I'll need more experience to evaluate properly.

I can really get places fast on this bike. Once I get into better shape, I mean. It's been a while since I really used my thigh- and belly muscles, and had a long hard thing between my legs. What's up with racing saddles? What happened to saddles which actually support your buttocks?

[PS: Do people on bikes not indicate turns in the UK? Every time I did it, somebody waved back at me!)

Update: a reader points to this highly interesting and controversial page about helmets and safety.
Posted by Eolake Stobblehouse at Wednesday, August 12, 2009 36 comments:

No Country For Old Men

No Country For Old Men, movie.
A difficult movie to review. Through 80-90 percent of it I thought it was one of the most powerful and moving films I'd seen. Also had a lot of subtle humor. Beautiful acting and cinematography, and never clichéd.
But then it ended in not one of the many possible endings you could have imagined for the story, and it felt very unsatisfactory. To me at least. Pissed me off. I thought that was unnecessary, I don't know what the point was. It was like somebody putting out a delicious desert after an excellent meal, and then taking the desert away after you'd had one bite.
It does have this going for it: it has one of the most fresh and scary villains we've seen since, fuck, I don't know, a long time. He's cold as dry ice.
Posted by Eolake Stobblehouse at Wednesday, August 12, 2009 18 comments:

The amateur artist is free

-----
The young me would have killed me for saying this, but I've come to learn that earning a living from creativity, real creativity, is virtually impossible. And not even all that desirable.
When I was a teenager I wanted to be a professional photographer, but after an internship and such I saw that this would be like becoming a house painter because I liked to paint pictures. Or becoming an airline pilot because I like WWI dog fights. It just had nothing to do with creativity at all. Nothing.

I believe that the very tiny minority of, say, fine arts painters who earn a good living off their work for most part does so out of luck. They style was pushed by the galleries and hit a nerve with the fine-art buying audience, who for most part buy as investments, not because they understand the art.

Now, I'm lucky and I make a good living at something fun and have time left over to fiddle with my own art. This is a great thing because it means that I'm not screwed if the art public changes taste, or they don't like a new direction I'm going in, or I just hit a dry spot for a year or two.

I won't lie to you, it has taken a lot of internal work for me to get over the mental identification between "successfully making art" and "financial success as an artist". But I'm getting there, and it feels very freeing.
Posted by Eolake Stobblehouse at Tuesday, August 11, 2009 20 comments:

Another mini-review: House Bunny.
I like Anna Faris, she is cute and hot, and very funny. (Lo the Scary Movie trilogy.) I'm sure she's also a lot smarter than her typical characters hint at.

This is the first film where the idea was hers, and she co-produced. And I deem it a success. It may not transcend the college-comedy genre, but it's funny and entertaining all the way, and heart-warming. Recommended.
Posted by Eolake Stobblehouse at Tuesday, August 11, 2009 2 comments:

[Update: there are at least three levers (see below) on the dang bike (Kalkhoff Pro Connect S) I have no clue what do. And I can't find instructions anywhere (except for the battery)! I've tried the store and an online forum, so far no answers.] [Update: got answers today Wed.]

I had not intended to post about my new bike for a while, because I just got it today, and I don't know how things will go. (For example, last bike I tried was a racing bike, and a five-minute trial resulted in a spine incident. I also dislike exercise, so I'm hoping getting an electric bike will get me over that hump, and help me get out to a wider area of things to photograph.)

But I guess now the cat's out of the bag, because I just wanted to post this photo which surprised me. It's in indoor light, so I had intended to use flash. I forgot to turn on the flash for the first picture, and to my delighted surprise, it not only is usable, it is much better than the flash picture, and it is sharp. The lens was set to 28mm (equivalent) which is a bit wide, which helps, but still... it was taken hand-held at 1/6 second!

The anti-shake in the Panasonic G1 kit lens must be fantastic to allow perfectly sharp photos at such long exposure times. (I'd read a reviewer mention this, but not thought much about it.) 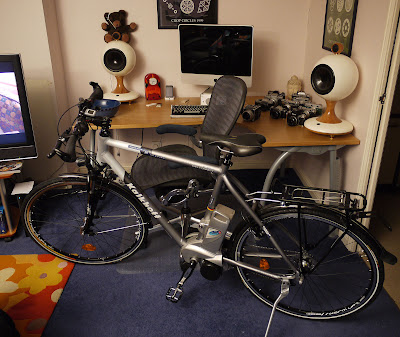 (Click to enlarge.)
-
Unknown levers seen from above and below. (Scuzzi the odd picture quality, still learning the G1.) 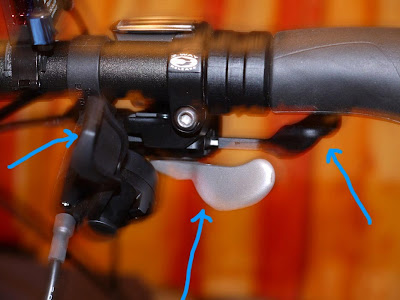 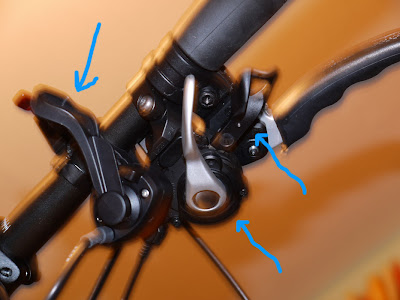 (The wires just disappear into the frame, so it's no use following them.)

Update: finally got an email from the store: the thing I thought was the gear changer on top (half shown top left) is actually regulation of the suspension. The two right levers are for gears up and down. The big black lever is the throttle. (Though I'm not sure why it needs one when it has three power modes, and also supposedly reacts to how hard you pedal.)
Posted by Eolake Stobblehouse at Tuesday, August 11, 2009 27 comments: 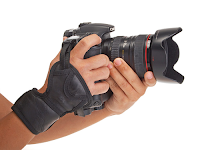 Photography Blog (often a surprisingly good site) has this item about a quite elaborate wrist strap.
I've tried something like it, and it didn't work for me. My hand was held too close to the camera, and I had to bend my fingers uncomfortably to use the controls and shutter button. (Granted I have big hands.)

What works much better for me is a much simpler device, the Wrist Wonder. It leaves your hand free and loose, and yet with the proper adjustment I don't think there's any danger of dropping the camera. 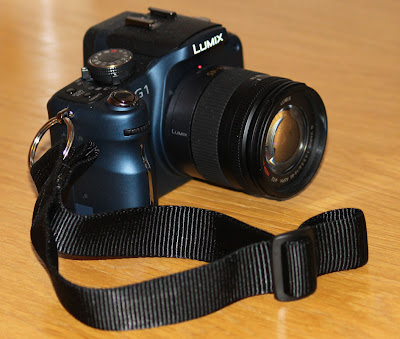 I think it's interesting how Sports Illustrated has done this. Before, the swimsuit issue was thinly justified by "well, it's about the suits, of course, swimwear". But now even the suits are gone. It's just gorgeous women. Good for them.

I'm reminded of a Doonesbury strip some years ago where stacked movie starlet Barbara Ann "Boopsie" Boopstein appear in an S.I. shoot. The photographer tells her how to pose and asks her to think about the thing they are selling. Boopsie strikes a sexy pose with bum and bosom each sticking way out, and her miniscule bikini almost falling off, and conscientiously thinks "sports wear!". (Sadly I can't find the strip online.)

Funny enough, I have never seen a single copy of Sports Illustrated, swim suit or not, so I have no idea what they normally write about. I guess, some aspects of sports, which does not interest me. I only know about that magazine because the swim suit issue is so famous. I guess that tells us something.

This page has a humorous look at S.I.'s S.I. It has this quote from a strip I think was the day before the one I mentioned:
In 1989, Doonesbury's Boopsie, who's had her shower-scene moments in a variety of B films, posed for SI. On location, she's talking to the issue's editor:

Editor: Let's have you try on the swimsuit now, okay?

Boopsie: Okay. Where is it?

Boopsie: This? Oh, sorry. I thought it was dental floss.
-
They also tell this story:
A letter to SI, after the 1967 swimsuit issue arrived in Sister Mary Ephrem Loretto's mailbox: "My copy was burned immediately, and the subscription will cease. Perhaps you do not know it, but nudity is more destructive to our youth than an atom bomb."
-
Posted by Eolake Stobblehouse at Monday, August 10, 2009 11 comments:

[Just a little post for the camera geeks here. Booooring.]

This god-awful picture is a test of the Canon 85mm F:1.2 lens, which is a portrait-lens the size of a grapefruit and three times as heavy. This is because F:1.2 is an exceptionally wide aperture, meaning the lens is "fast", it takes in a lot of light at once, good for low-light and also is good for very blurred backgrounds when needed.
Those in the know will know that fast lenses are usually not very sharp at full opening. It's just a fact we have learned to accept. It's generally even true for expensive lenses.
But this is an exception. The picture is taken at full opening, 1.2. As you can see, even at a distance of what, 60 meters, the "depth of field" is very narrow, meaning only the object you focus on is sharp, nothing behind or in front. (This is also how you can see it's taken at full opening.) But I focused on the fence behind the lamp, and look at the fence and the bushes in the focal plane. What detail! This lens is superbly sharp, even at full aperture. 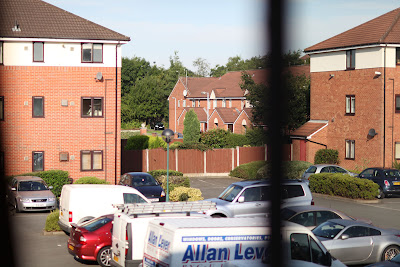 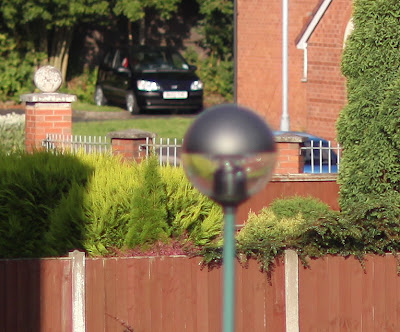 (Click for larger versions. After doing so, the cropped version is viewed at "100%", meaning pixel for pixel like from the camera.) (The photo had a slight "sharpening" in Photoshop. You may be aware that this actually does not bring out more detail, it merely enhances edge contrast.)

Below is from the edge of the frame. Not a lot of difference from the center, also impressive. 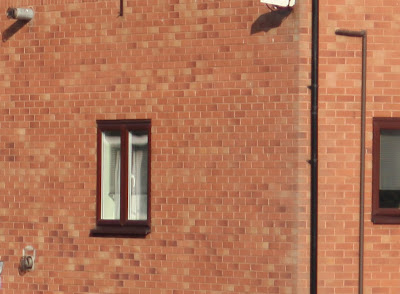 If you're the type of person who is interested in spirituality and emotional energy and such stuff, you might like this post on my spirituality blog "Power Of Source".
Posted by Eolake Stobblehouse at Sunday, August 09, 2009 No comments: