The Goliath Beetle, biggest insect in the world

I've always thought that beetles were visually kewl, but I didn't know that any of them got this friggin big! Oh mama. 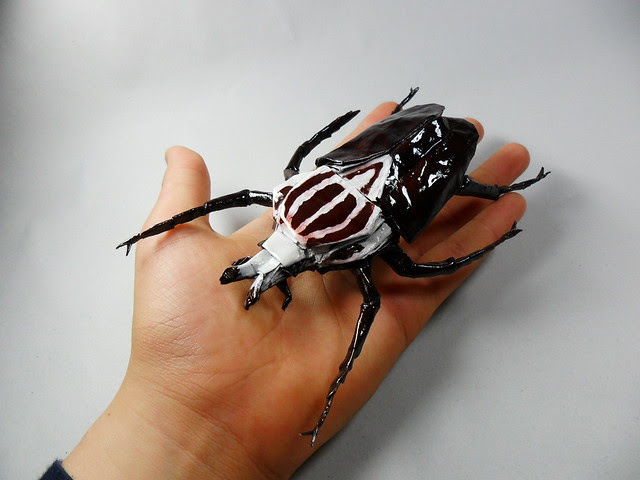 LOL! as the kids say. I know how he feels.
(Got it from this article about iOS 7 design.)
Posted by Eolake Stobblehouse at Friday, June 28, 2013 No comments:

Can you carry cash?

There are signs that some forces are working on it becoming illegal to use cash in the US, probably in all other countries too.
It is easy to go overboard in all the conspiracy-thinking, but there is clearly something to this.
It was foreseen by the way in the 1984 (!) SF novel Neuromancer, in which is it casually mentioned that using cash is rare, and only really used in the criminal underworld.

This is just one of those silly nostalgia thingies for me. I guess.
Brødrene (the brothers) Olsen was and is one of those bands in Denmark who continue decade after decade with a solid fan base and business, playing in small venues, without ever really hitting it big. The closest thing to that I think was this song, which came this close to getting them into the Eurovision song contest. There was general agreement later that it really ought to have.

English version, perhaps the best one, or at least it's different:

Original TV contest version. (Gold and silver, it was the seventies!!)

Below a much later live version, with big orchestra. And a bigger venue than the time I saw them live in the habor festivities in the small town I lived, the audience must have been 40 people. I don't know, I feel a little sad for them, but I can imagine they would tell me to fuck off with that sentiment! They have the fans, and if they can pay the bills and like their work, good for them!

Denmark is an odd market, artistically, because it's so small. 6M people. It means you can be well known by everybody, and still only earn a half-decent wage. I heard of a newspaper report some years ago that Kim Larsen, of the top names in pop music in DK for decades, only had a net worth of about a million dollars! This of course, in typical (Danish) newspaper style, was made to sound like a lot (Danes love to peck at successful people), but in international terms, it's a pittance. I just heard that Charley Sheen got paid 1.6 Million per episode in the last couple of years he was in 2.5 Men. (BTW, how come he looked 40 in 2.5, and 50 in Anger Management? Is his lifestyle finally catching up to him?)

Must be a scary task to design such a huge hole in the side of a plane and keep the integrity of the plane! And even more to get no vibrations, very impressive.

That huge thing is moving around, controlled with gyroscopes, and can be honed with precision over hours, in an airplane.
Posted by Eolake Stobblehouse at Monday, June 24, 2013 No comments:

It had been a while, but I just checked into The Online Photographer to see if he had comments on the new Leica. Instead, what did I find right at the top: a surprising review of a book I had sent Mike a few years ago, The Trick to Money Is Having Some. (... UK link.)

It turns out that despite that book being rather, oddball and new-agey, it has actually helped Mike just like it did for me. And I'm delighted, this was of course the reason I gifted him the book in the first place, I thought he didn't deserve to struggle so, being an unusually intelligent and talented writer.

Because it's easy to see the book as being a bit...obtuse; addled; New Agey...not entirely logical, is what I'm trying to say.
What did I have to lose? A few hours' reading time. So I read the book. The whole thing.
...And it instantly had an effect on my bank account. Because, specifically following the book's advice, I gritted my teeth and stuck what I thought were some ridiculously, absurdly high prices on some services I'd been offering. And almost instantaneously, those services started selling for those ridiculously high prices. Customers materialized out of nowhere. And commenced mailing me checks.

Nothing in this world works all the time, or for everybody. It's not that kind of world, you may have noticed! But some things do it often enough that it's worth it to take a look.
Posted by Eolake Stobblehouse at Monday, June 24, 2013 No comments:

Web Inventor Tim Berners-Lee Warns The Powers That Be Are 'Trying To Take Control' Of The Internet, article.
“If you can control [the internet], if you can start tweaking what people say, or intercepting communications, it's very, very powerful...it's the sort of power that if you give it to a corrupt government, you give them the ability to stay in power forever.”

So far as I know, Time Berners-Lee has never been a guy who cried "Wolf" all the time.
Posted by Eolake Stobblehouse at Sunday, June 23, 2013 No comments: