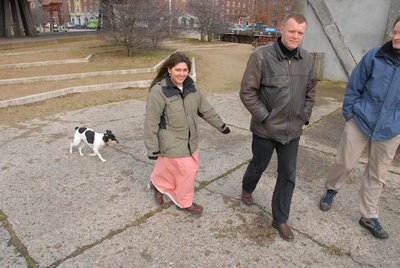 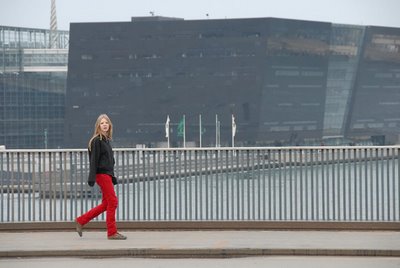 Various new pictures (26 of them) from the Copenhagen Easter trip 2006 in a zip file here.
Posted by Eolake Stobblehouse at Friday, April 14, 2006 3 comments: 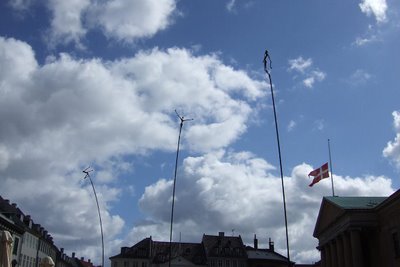 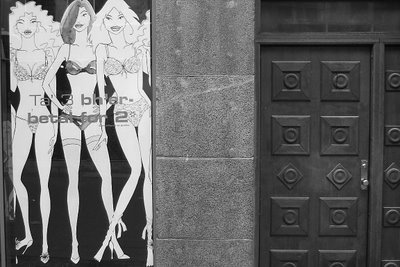 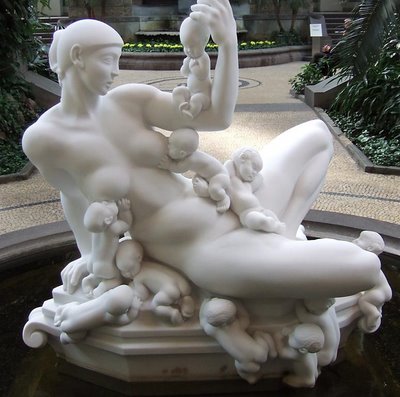 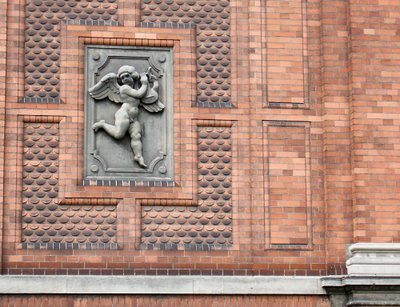 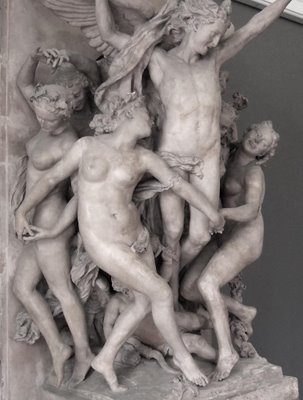 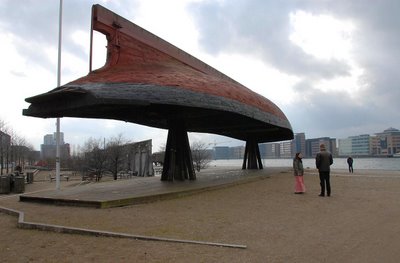 Right across from the hotel is this beautiful boat hull, mounted as a sculpture. Nobody here knows where it is from and why or how! But I like it.
Thanks to my friends Martin and Alexandra for posing... Even though they were just walking/talking and didn't notice.
And thanks to my friend Peter for putting up with me interrupting our conversation every three minutes to photograph something.
I am now sitting in the huge and gorgeous lobby of the hotel, wirelessly online with my laptop, and doing a relaxed bit of reading, as well as photoshopping and blogging... Ya gotter love it!
Posted by Eolake Stobblehouse at Thursday, April 13, 2006 5 comments: 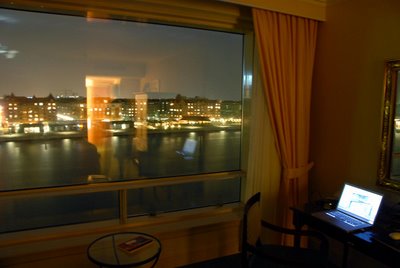 To the left, Copenhagen by Night, view from Hotel Marriot over Islands Brygge. To the right, the new MacBook Pro, on which I am working on this trip, including processing these images. (For you Mac fans, yes, the processor i plenty sufficient for Photoshop work, even though Photoshop is not optimized for it yet!)
The photo is taken with an exposure time of like 20 seconds, with the camera on top of a floor lamp, the worst "tripod" ever, so it's a wonder it's even useable for web use.
You can see me faintly reflected in the lit doorway. (I also have a pic with me in the window, but this was the superior picture.)
Posted by Eolake Stobblehouse at Thursday, April 13, 2006 No comments: 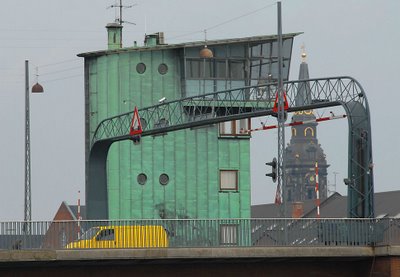 This is from today, officially the first "real" picture from this trip. This is the guard tower of one of Copenhagen's most famous bridges, Langebro (Long Bridge), and of the Copenhagen's many towers in the background.
I was walking a nice walk with a few old friends, but even the most intellectual conversation can't keep my interest fully if I'm walking around with a camera!
Posted by Eolake Stobblehouse at Thursday, April 13, 2006 No comments: 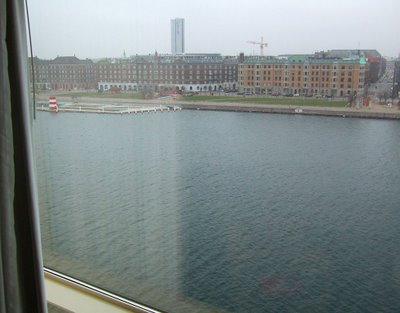 I am now on one of the first vacations, more or less, that I have taken in decades. I am really spoiling myself. Living in hotel Mariott in Copenhagen. Look at this view! 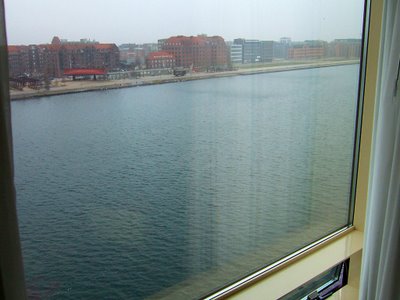 I've been berated in the photo club community (in the far past) for photographing pretty things like dew on cob webs, and I am sure a rainbow would be in that category too.

A famous Danish photographer prides himself on never having photographed a flower.
But why limit ourselves? Some of van Gogh's most brilliant paintings were of flowers.

And while I don't expect to make immortal art photographing a rainbow, why not just bend to a little prettiness once in a while.

A corollary is how a very pretty person who is also very bright (Sharon Stone or Natalie Portman for example) has to struggle to be perceived as anything but decoration.
Posted by Eolake Stobblehouse at Tuesday, April 11, 2006 3 comments:

And the other end... 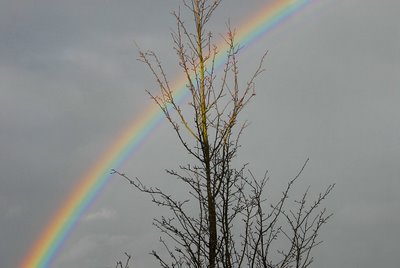 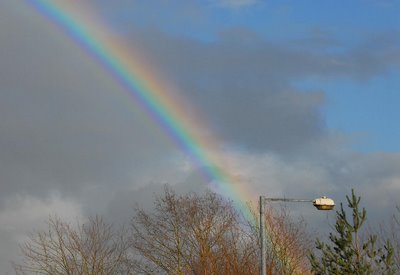 5 minutes ago.
Posted by Eolake Stobblehouse at Tuesday, April 11, 2006 No comments:

"Doubt is not a pleasant condition, but certainty is absurd."
-- Voltaire
Posted by Eolake Stobblehouse at Tuesday, April 11, 2006 1 comment: 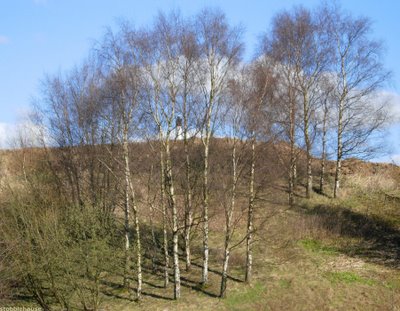 From today.
Again from "The Valley", basically an industrial area, and an area I am sure very few people see anything painterly about. But if you spot just the right frame amidst all the chaos...
Posted by Eolake Stobblehouse at Monday, April 10, 2006 No comments: 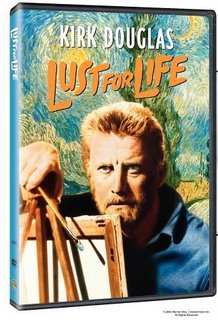 I am watching the film Lust for Life from 1956 with Kirk Douglas as Vincent van Gogh.
I had never bothered with it before because most films from before 1970 seem very fake to me. To my delight, this is not the case with this one. It is almost like being there. And all the locations and all the actors look just like we know them from Vincent's paintings.

Kirk is great as Vincent, the passion and excitability is so well caught. 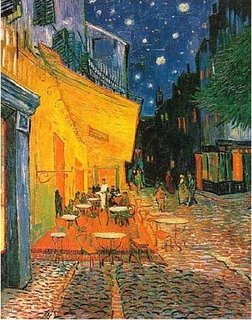 And the film has many subtle touches. An example is when Vincent and Gauguin go and sit in a sidewalk cafe, they walk into the exact equivalent of one of Vincent's paintings, the angle and coposition and colors are exactly the same. And they don't show the painting to show off how clever they are, they leave it as a tidbit for those who know the paintings. Delightful.

When you get the DVD, do listen to the commentary, there are many interesting insights.
It is amazing how good the film looks on this DVD. You could imagine it was a new film. I know how much trouble they had restoring Star Wars, the film negatives had deteriorated so much! And this film is twenty years older, I wonder how they did it. And the budget must have been smaller than for Star Wars, a van Gogh bio film can't be a bestseller, I guess.

Also worth mention is the Iggy Pop album Lust for Life, perhaps his best. Iggy has admitted to me that he likes van Gogh. (Also hinted at by his song Starry Night.)

Now, I am thinking of a trip to Arles to photograph a little. If the light (softened by the clouds spread thin over the sky by the mistral winds) is so great for painting, it must be great for photos too.

I'm sure the summer heat would all but kill me, so it would have to be in the winter or early spring. But what month would have some color in the landscape and the best weather? If you are familiar with Arles/Province, please write to me.
Posted by Eolake Stobblehouse at Monday, April 10, 2006 3 comments:

From a comment by Wonko to the "Father" posting below:
"During the surmon he stated that he admires people who have such certainty in their faith."

I think many of us have felt that. And it is clear that the most powerful people in the world often have the strongest beliefs, and the strongest certainty in their view of the world, whether religious or otherwise. And they are probably healthier and sleep better too.

But... would you rather be healthy and successful than actually be right? Hitler was amazingly certain of his beliefs, otherwise he could not have accomplished destroying half of Europe. But is the world really better off, and was Hitler really better off, for his certainty?

The universe is complex, and it seems we are just starting to unravel many of its most important secrets. (Quantum theory etc.) Spiritually we are toddlers. And I think it is a bad thing for a toddler to be too damn certain about anything at all. Anything.

Sure, it hurts to be uncertain. But I think we need to live with a lot of uncertainty for a while yet. It'll get better, and personally I am just trying to relax and enjoy the ride.
Posted by Eolake Stobblehouse at Monday, April 10, 2006 2 comments: 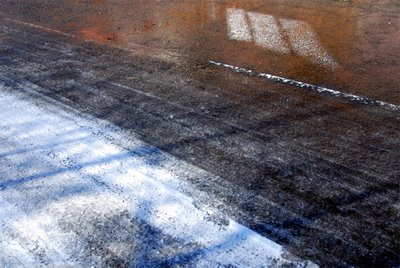 Posted by Eolake Stobblehouse at Sunday, April 09, 2006 No comments:

Responsibility and Energy, new article on my site What, Me Artist?
(The first new one in years.)
Posted by Eolake Stobblehouse at Sunday, April 09, 2006 No comments: