If your friend never ever says anything negative about you or things you care about, how do you know if they are always being honest about the positive things they're saying, or just being polite?

In the other end, if your friend is always saying negative things, are they really the sort of person you want to hang around?
Posted by Eolake Stobblehouse at Saturday, January 21, 2006 2 comments:

Make a camera from a cheap scanner and a big old camera. Point it at scenes with moving objects/people. Lo and behold, strange and eerie pictures.
Thanks to Mike Johnston for the link.
Posted by Eolake Stobblehouse at Friday, January 20, 2006 3 comments: 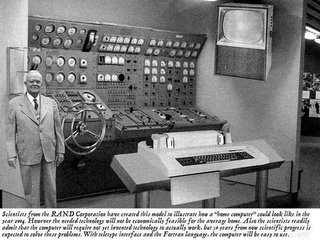 A scarily accurate prediction from 50 years ago about a possible "home computer" for the early 21st...
This is so much like the iMac that it is just uncanny.
("With teletype interface and the fortran language, the computer will be easy to use...")
From 1954 Popular Mechanics Magazine.
(Click image for bigger version.)

... Dammit, it was too good to be true.
I did think the TV looked a bit fake.
But it could have been true at least, and that makes it funny.
Posted by Eolake Stobblehouse at Thursday, January 19, 2006 8 comments:

Surprise!
A wonderful artist from NYC collaborates with me.
(Sample her music too, she is a wonderful singer.)
Posted by Eolake Stobblehouse at Tuesday, January 17, 2006 1 comment:

Warmly recommended: Postcards From the Edge.
One of the funniest films I know, while being much more than a comedy. It is written by Carrie Fisher (based on her book), and it has the most amazing dialogue.
Also in it, Meryl demonstrates that she is a fantastic singer. Did you know?
I have found the ending song from the DVD, it is a real favorite of mine, I am sure you can't get it on CD anywhere. I put it up here as an MP3 file, so you would get it, love it, and buy the movie.
One comment: these are items which defy description and classification. The song is country... which I really dislike generally. But not this one. And the film, if you read about it, you think you know what it is about. But trust me, it is really not like any other movies. It is one of those rare things where everything just comes together and it burst out of any envelope which may try to contain it.
One of my best friends is a fierce individualist. When this movie was in the theatres, he was thinking of going to see it, and he asked me of my opinion. I said it was the best film I'd ever seen. Then he said "then I won't go see it". That was just too much hype for his taste! :) You just can't win.
Posted by Eolake Stobblehouse at Sunday, January 15, 2006 16 comments:

"I don't know whether my life has been a success or a failure. But not having any anxiety about becoming one instead of the other, and just taking things as they come along, I've had a lot of extra time to enjoy life." - Harpo Marx

Last year I wrote this:

I have started a support group named Goalaholics Anonymous. You are invited.

Du you sit up in bed suddenly when you should be sleeping, getting overwhelmed by a burning desire to have a strong goal, any goal?

Are you restless and irritated even though you know everything is going great and according to plans?

Are you sometimes absent while talking to others, staring out the window and dreaming of things greater than this world?

Join Goalaholics Anonymous. Vi know how you feel. We may teach you to appreciate the little things while the rest of the world are slowly waking up.

Goalaholics Anonymous: For big people in a little world.
---

I wanted to register goalaholics.com for this, but it turned out somebody had beaten me to it, a cool guy named Stephen Shapiro.
Posted by Eolake Stobblehouse at Sunday, January 15, 2006 No comments: