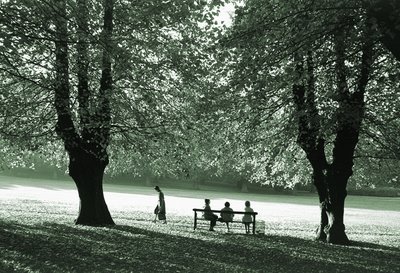 This one, like many of them, was taken with a super-compact camera. I always liked those. In this case a Ricoh 35. Which was within my budget at the time (my teens), and was shirt-pocket sized, and made a funny little bell sound at shutter release.
Posted by Eolake Stobblehouse at Saturday, November 18, 2006 1 comment: 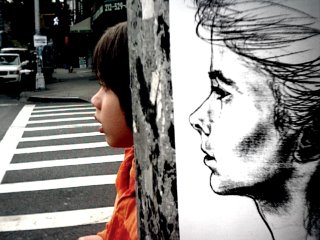 Lo this cool picture from Michal Daniel.
His site contains many excellent pictures taken with a palmtop, of all things.
Posted by Eolake Stobblehouse at Saturday, November 18, 2006 1 comment: 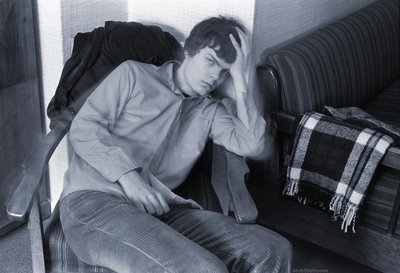 Stob, circa 1979. I like the tones.
The special look is due to my patented flash+long exposure+movement technique. (R) (I'm told it existed before I used it, but I haven't seen it.)
Oh, it's a self-portrait by the way.
Posted by Eolake Stobblehouse at Friday, November 17, 2006 18 comments: 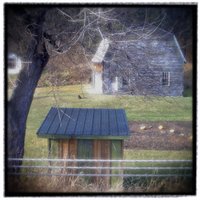 Mark Hobson toy camera art. I think he has a really good eye.

Mark also has a page of pictures from a more regular camera. Some of those are also interesting to me, but curiously, a smaller percentage. For me, "what an cool picture" is more interesting than "what a stunning landscape".
Posted by Eolake Stobblehouse at Thursday, November 16, 2006 1 comment: 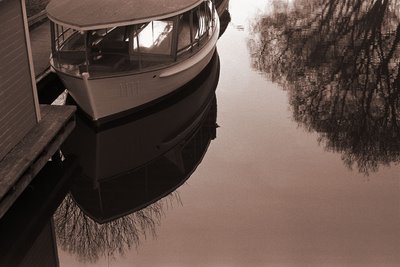 I can't believe somebody makes art like this in edible materials! I would want it to last.

A couple weeks ago I listened to the audio version of the latest Discworld novel "Thud". I was not expecting much because it sounded like it would be a bit depressing like the last Commander Vimes book Night Watch. But I actually liked it a lot. Just for one thing it had what Pratchett rarely uses in his books: sexy women. Hot and fearsome police werewolf Sergeant Angua from the Watch go undercover with what would normally be a natural enemy: new policewoman Sally, who is a beautiful vampire. (Not to worry, she has sworn off human blood.) At some point they end up underground, naked and covered in mud, and almost going at each other's throats. Like Sally says then: all we need now is a paying audience...

Another note about user interfaces...
Apple usually gets it right, but check this out, it is the "get info" settings in iTunes when one has selected more than one item: 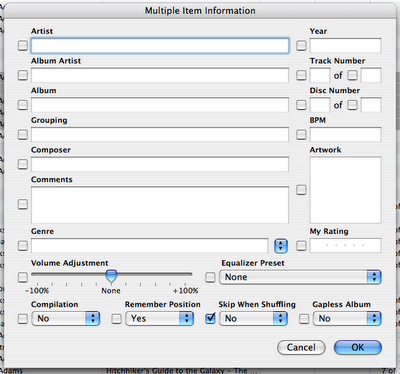 ... The settings at the bottom have both a tick box, and a popup menu... What the heck does that mean? :)

(This does not help the confusion: the tick box is selected automatically when one selects "yes" from the popup menu, but next time you select the files, there is no tick in the box, though the menu still says "yes".)
(This is all on Mac OS X, it might be different on Windoze.)
Posted by Eolake Stobblehouse at Wednesday, November 15, 2006 3 comments: 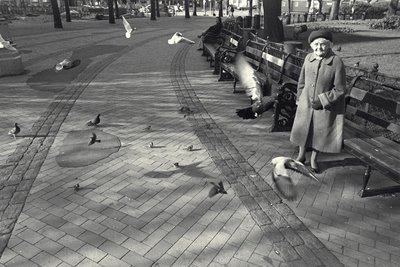 From Kongens Nytorv, Copenhagen. ("The King's New Square". It's round though.)
Posted by Eolake Stobblehouse at Tuesday, November 14, 2006 5 comments:

Have you seen the famous Honda ad with all the car parts pushing one another in a long line? It's great, and the idea was originally from a German art film named Der Lauf Der Dinge. It's amazingly half an hour, I recommend the DVD.
Posted by Eolake Stobblehouse at Tuesday, November 14, 2006 5 comments: 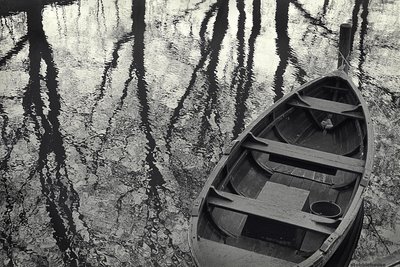 In the nineties, I lived in the really neat town/suburb of Copenhagen named Lyngby. What I miss the most from there are the great big parks located three minutes walk from my home. This photo is from there and then.
This was amongst the last pictures I ever took on film. This film was developed in Agfa Rodinal, a famous B/W film developer which was not exactly good for fine grain and had problems with shadow detail, but which gave this amazing "accutance", meaning edge contrast, which gave the pictures a unique impression of sharpness and, um, presence, somehow. (It's similar to a strong use of the "unsharp" filter in Photoshop.)
I think it's perhaps the best photo I made in that period.

Update: I was mailed now by my old friend Memo. Martin and I must have gone to the cafes in Copenhagen a hundred times. We have many common interests, like art, photography, beautiful women, good coffee, and philosophical discourse. He challenged me to admit that one more thing I miss about Lyngby is the cute girls. He couldn't be more right. Sure, there are wonderful women all over the world, but there is something about Danish women, especially in the nicer areas. Not only are they beautiful, but they tend to have keen minds and a sense of humor, as well as a relaxed self-assurance. Gotta love it.
Posted by Eolake Stobblehouse at Monday, November 13, 2006 3 comments:

I've designated Lucid Twilight as the second commentary prize winner, for his many advanced, yet lucid comments.
I'm buying him the last book I recommended, The Disappearance of the Universe, and one more book of his choice. Mail me a choice, Brucie. (That's slang for a superhero, referring to either Bruce Wayne or Bruce Banner, whomever you like best.) (I thought I'd try out this slang-inventing thing myself.)
Posted by Eolake Stobblehouse at Monday, November 13, 2006 5 comments: 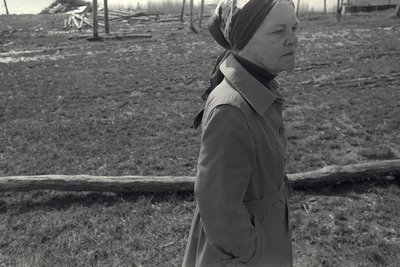 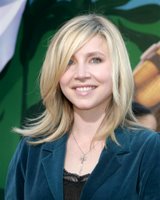 See this interview with the wondrous Sarah Chalke.
(From Scrubs. A wonderful comedy show, and one of the modern kind with one camera and no audience laughing.)
Take care to note her excellent way of handling touchy questions by answering them but not answering them. Well done, Sarah.

The question was raised in comments to the last post if it is a bad thing to take your self worth from the outside. From admiration by others in other words.

Update: Ooh, I just had a realization: it is impossible to only let yourself be affected by praise, and not by criticism. They are two sides of the same coin (named Other People's Opinions). You can't take just one side, you take the whole coin or nothing. I suspect "nothing" is the wiser choice here.

I was disappointed when John Travolta, such a hugely talented actor, told in an interview how much stock he put into getting an Oscar. He's had two nominations only so far, and there were seventeen years between them. And he said he'd been struck by a deeply depressing thought: what if there were seventeen years until the next nomination too? *
Come on, John, be a man! Tell Oscar to go frig himself. You live for yourself and your art!

Much better is David Bowie's attitude. An interviewer asked him what he'd think if he was given a knighthood like Elton John was. He said that he'd tell the queen to give it to somebody who cared. Good man.

* The fact that John did not see how this looks, tells us how all of Hollywood is totally in the thrall of the Oscars and public praise. Johnny Depp is one of the exceptions, along with Sean Penn and a few others.
Also, I think it now has been over a decade since that interview (I think it was after Pulp Fiction). How's it going, John? How about just making good movies?
Posted by Eolake Stobblehouse at Sunday, November 12, 2006 11 comments:

One of my oldest Internet-friends, Carter, introduced me to the term "magic dust". He uses that to mean the phenomenon of being uplifted by the beauty of some woman he sees.
"And I am the one giving her that girl power, the wow factor. I call it magic dust, I carry a supply and sometimes dump it on the young woman and then marvel at how she sparkles and shines.
"... Magic dust is a way of saying that I give the woman the power to affect me and that other men may have no interest at all. She is the same, it is me giving her the power."

How true. And funny how I recently (I'm now reminded) suddenly realized this myself. To my horror, I think. But should it be? I mean if we are doing it all ourselves, then that would mean that if we learn to control it, we can uplift ourselves any time we want.
Probably the same principle applies to all life's areas.

Update: Ha, I just remembered many years ago, I was sitting with a pal in Florida, when a stunning Asian-American woman walked past. Absolutely gorgeous. And she had on a very small and thin tee-shirt...
After she had passed, my friend turned to me and said: "Did you see that?! That's what makes a man do unethical things out here!"
Posted by Eolake Stobblehouse at Sunday, November 12, 2006 18 comments: