In the foreword to A Slip Of The Keyboard by Terry Pratchett, Neil Gaiman talks about how Terry, who usually seemed jolly and mellow, was nothing of the kind, he had tonnes and tonnes of anger.
And Terry loved his anger, and claimed that it was the driving force behind his creative output, such as their wonderful collaborative book, the very funny Good Omens.

I hate to disagree with a genius like Terry Pratchett, but I must. While it is fantastic to be able to turn around your anger and seemingly having it contribute to powerful creative output, I think it’s a bad metaphysical mistake to *venerate* it and to think it’s a positive force. It is not. Everything is better without anger (or fear, which is below anger). Anger is rigid. You can work well *despite* anger, not because of it.

Admittedly, Anger is not something one gets rid of in a hearbeat. It takes long work. But a good start is recognizing it for what it is.
Posted by Eolake Stobblehouse at Tuesday, July 03, 2018 2 comments:

I really like the SF novel Holy Fire by Bruce Sterling. It beautifully and interestingly dramatises a theme I have not read in any other book: the conflict and contrast between wisdom and (over-)carefulness of old age and the beautiful raw life-force of youth (“holy fire”).
How often do you seen an entirely fresh theme in a book?!
And it is powerfully described in the same character, a very old woman, Mia, who in the late 21st century gets a radical new medical treatment which rejuvenates her to an apparent age of twenty.
And the dense culture of the late twenty-first he describes is delightful. 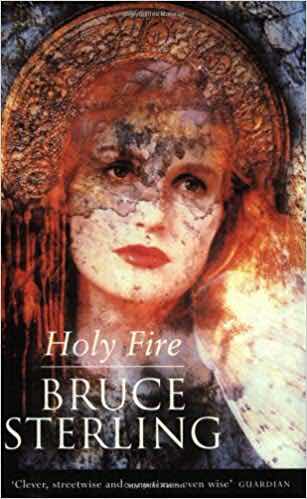 Posted by Eolake Stobblehouse at Monday, July 02, 2018 No comments: