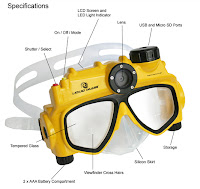 Underwater camera mask.
Not such a bad idea, actually. Nice to have your hands free underwater.
Posted by Eolake Stobblehouse at Saturday, January 12, 2008 16 comments:

A subtle satire of web forums. (Fora?)
(Appears to refer to this.) (Though funnier to read.)

Also another article from Mike Johnston, typically with way-above-average perspective on things, about lenses and sharpness.
Posted by Eolake Stobblehouse at Saturday, January 12, 2008 2 comments: 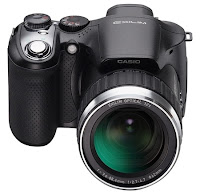 I mentioned this camera a few months ago. Now it is available.
Taking sixty pictures per second. Or filming at 300 fps. Kewl.

Also notable it seems like now the time has arrived when you can get both a good still camera and a decent video camera in one body. Not only this camera is of that class, many consumer cameras can. (Copious consumer cams can capture can-can with class.)
Posted by Eolake Stobblehouse at Friday, January 11, 2008 11 comments:

Bjørn Rørslett on the D3

Norwegian Nikon expert Bjørn Rørslett on the Nikon D3.
(You can tell how repected this guy is as a reviewer by the fact that he apparently has had the D3 "for months". How do you get that gig?)
This guy is a big Nikon fan. It seems he owns practically every lens Nikon ever made.

"The ability to shoot under adverse light situations without resorting to the use of a mood-killing flash is perhaps one of the most important characteristics of the D3 concept. As such, it is bound to influence the approaches we follow in our day-to-day handling of photography challenges."

"For me the arrival of the D3 is the final nail in the coffin for "35mm" silver-halide reflex cameras. Of that I'm certain. [...] Film is no longer a viable option in this respect, unless you step up to a large-format view camera. But such a system is not suited for my approach to photography."

Update:
"Many users [That's me], not familiar with pro-calibre DSLRS, might wish for a lighter camera and overlook the benefit of having a substantial mass behind your lens. The balance with the typical professional f/2.8 zoom lenses or a 300/2.8 telephoto is just about perfect."

I'm familiar with them, and as a street photographer, I really don't like the weight and the size. I got rid of my D2x for that reason, after I got the D200.

I never understood this talk about "balance". I have never in my life held a camera and thought "this has wrong balance" or "this has a good balance". I just don't get it. You hold the camera and you shoot, what's there to balance? You hold it in two hands, you don't balance it on a finger.

This is also the reason (apart from price of course) that I won't be getting the D3, despite the very lovable low-light performance. Instead I'm waiting for the replacement for Canon's 5D, which should have a similar sensor and a similar performance, but in a dramatically smaller form and price range. (The main reasons the big pro cameras are so expensive are high speed shooting and professional endurance, two features that don't apply to a street shootin' amateur like myself.)

I was a little surprised to read:
"Great. They're taking an idea that failed dramatically several years ago and throwing more money at it."

Maybe the writer considers this service special since it has free delivery. I pay five pounds per delivery, a fee I consider eminently reasonable, considering the hassle and time it saves me.

I also learned: "Grocery stores have extremely thin margins, as little as 1 to 2 percent" Holy cow! How can a business even operate in such a way? There can't be any margin for error at all.
Posted by Eolake Stobblehouse at Friday, January 11, 2008 27 comments:

Self-publishing is getting easier.

The New York Times is a little behind, though, I wrote about this phenomenon 8 years ago.

In the article I mention Dune as a book which had a hard time finding a publisher. Well, there are many stories like that. One particularly intense one is that Harry Potter was turned down by twelve publishers! Can you imagine how those twelve editors must still be kicking themselves to sleep each night?

... This is the first I hear of Amazon CreateSpace. Interesting.
Posted by Eolake Stobblehouse at Friday, January 11, 2008 10 comments:

It looks like Blue-Ray will win the HD format war.

Oops, I gambled on the wrong side.
Ah well, lord knows I've had worse losses.

Though nothing like Steve Jobs. He once lost 200 million dollars in a couple months. "Very character building", as he put it. :)
Posted by Eolake Stobblehouse at Thursday, January 10, 2008 7 comments:

I got these yesterday, sent by "a wrinkly fan/stalker" as she terms herself.
Actually a nice lady, and I was at her birthday party last Sunday. 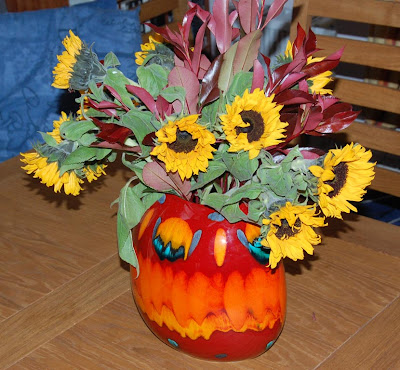 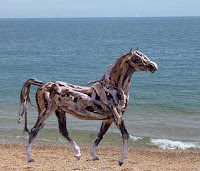 Even for non-horse fans, this is excellent art. The sculptures are really "horsey".
Posted by Eolake Stobblehouse at Thursday, January 10, 2008 4 comments:

A weird twist in copyright

Apparently now big corporations are stealing from individuals, instead of vice versa. It's a weird life.

Talking about weird, how about the Allison Stokke story? I an not sure what to think about that. On the one hand, I can understand that too much attention is too much, especially from creeps who overdo it or act as a-holes. On the other hand Allison is exceedingly attractive, and those shorts are really very small. It should not really be a big surprise that men like to put her picture on their desktop.

And about that, the former article, referring the latter issue, says: "It's all doubly muddled online, where images can be thoughtlessly taken with one mouse click, such as when thousands of boys made screensavers out of high school track star Allison Stokke's photo and never once asked, 'Legal?'"...
This is a pretty dumb comment. Personal use is legal. This issue is not germane to that discussion. I would expect better journalism from Washington Post.

Here's another remarkable comment: "'What's noteworthy in each of these cases', Lessig says, 'is that bloggers, a community typically associated with piracy, are rallying in support of copyright.'"
Bloggers are a community? With common personality traits? That's news to me. If "bloggers" are a group, it may well be the most diverse group I've ever heard of. And about the least coherent.

I'm reminded: 25 years ago, I was contacted by Danish newspaper Extrabladet, they wanted to use this photo of my mom (which had placed highly in national contests and exhibitions) to illustrate an article about the elderly. I refused, because even though back then I could certainly have used any money they would pay, Extrabladet is a low-brow, unprincipled, and mean-spirited publication, and I wanted nothing to do with them.
Posted by Eolake Stobblehouse at Wednesday, January 09, 2008 10 comments:

Recently it has become possible to post a message to a Yahoo Groups list, and the message not arriving, and you never noticing. There is no bounce message or warning.

It can happen if the email address you are posting from is not the same one as the one Yahoo Groups has listed as your *main* address.

It used to be you could post from any address you have listed in your profile. But now apparently not, and you don't get a warning. Pretty unfortunate, many messages may be lost without anybody noticing.

Update: I got an actual answer from Yahoo Groups support! Not bad for a free service. It turns out there are "alternate email addresses" and "alternate posting email addresses". The latter you find under "options" for each address you have listed.
Posted by Eolake Stobblehouse at Wednesday, January 09, 2008 No comments:

Here's a good article about the basic differences between Canon and Nikon DSLRs.

"One of the things that has a lot of people really bent is that the Nikon D3 can shoot at ISO 25,600. This is three full stops faster that ISO 3200, which for the record is three stops faster than ISO 400. (Just to put things in perspective).

Marcus Tristan Heathcock
I am poor in knowledge about classical music, but I like this guy's work. The first video, for example, is just a lovely piece.
Posted by Eolake Stobblehouse at Tuesday, January 08, 2008 6 comments:

This was written to me by Jim in Seattle, who is an artist in several mediums.

30 years ago my ex-wife and I invited a masterful pianist and his wife to dinner at our house... he interpreted the music composed by Gurdjieff and Thomas de Hartmann in a way that inspired all who heard it, as well as jazz and other genres. After dinner he admired an antique 1800s classical guitar made by Salvador Ibanez that was one of my priceless treasures hanging on the wall, and expressed envy of the way I could play the guitar. I placed it in his caress...he knew a few simple chords and strummed it for awhile. I picked up my guitar and played along with him, and could tell that he was discovering a new creative branch in his musical path. When we stopped playing, I told him to take it home, at which point he said he'd bring it back in a few days. I said, "No, it's yours." He accepted without hesitation because he knew both the value of the gift and the sentiment behind it...he ended up being an excellent classical guitarist in addition to his piano skills.

Creative relationships exist on a different plane, the best part of my life experience. My dad taught music to hundreds, thousands of kids during his lifetime, a fulfilling experience for him. He also directed the Seattle Philharmonic Orchestra and Choral Society, building it into creatively satisfying organization for those who participated and attended the concerts.

Giving something without anticipating anything in return, not even status, is a difficult thing. It's something I'm trying to learn. This is a slow process, but each time it happens, it has a spiritually healing effect for both the giver and the receiver.

... I think it should be noted that there are also levels below being selfish. Some people are unable to do anything at all just for themselves, they would feel too guilty. This of course is just the other side of the same coin. 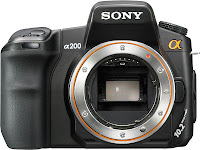 This is a very interesting new compact aggressively priced exchangable-lens* camera from Sony.
Compared to the otherwise excellent alternatives from Nikon or Canon, this one has built-in image stabilization which works with any lens. A great advantage in many situations.
Also the price with two complementary zooms is impressive.

* I suspect this is a more transparent term than "DSLR", the latter which takes some explanation**.
Some will object that there are cameras with exchangable lenses which are not (D)SLRs, such as the Leica M8, but those are rare and expensive.

** "Digital Single-Lens Reflex". "Reflex" because the light is coming through the lens and bouncing off a mirror inside the camera to give you the finder picture. (This then shows you exactly what the lens sees.) "Single-lens" because there also used to be such cameras with a separate lens for the finder (rather defeating the advantage of the reflex principle).
Posted by Eolake Stobblehouse at Monday, January 07, 2008 4 comments:

Fun in the store

[Thanks to Carter.]
Of course if all online stores were like this, we'd go batty (Roy Batty), but it's much fun to see once.
Not work safe due to loud music. People often say "turn up the sound on your computer when checking out this link", but I usually find I have to turn the sound down instead. For some reason the music I don't want to listen to on web sites always play much louder than the music I do want to listen to in my iTunes.
Posted by Eolake Stobblehouse at Monday, January 07, 2008 2 comments: