Gates sees it from the other side...

Gates spends entire first day back in office trying to install windows 8.1, article.
After failing to install the upgrade by lunchtime, Mr. Gates summoned the new Microsoft C.E.O. Satya Nadella, who attempted to help him with the installation, but with no success.
While the two men worked behind closed doors, one source described the situation as “tense.”
“Bill is usually a pretty calm guy, so it was weird to hear some of that language coming out of his mouth,” the source said.


I feel like saying to Gates what he himself used to say to people who said Windows was giving them problems: "Maybe you're doing something wrong. Have you thought of that?"
I read that almost 20 years ago, but it stuck with me due to the immense arrogance of the man.

One might hope he now will learn more respect for the customers, but I suspect he will find another way of shucking off responsibility for this too.

----
(By the way, it seems to me that this is about the third time in a decade or so that we are told that Bill Gates are Stepping Down. I'm confused.)

If the Internet has no fences or walls
who needs Gates or Windows?

[Thanks to my ol' pal Benny]

With less tentacles, but more legs, and pretty ones too, Here is ABBA.
Had almost forgotten how damn cute they were. (And how short skirts were in the seventies, I miss that.)
(Notice that the video image is a bit stretched (easily happens in conversion). The girls did not have fat legs.    :-) 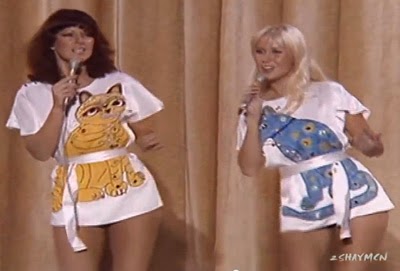 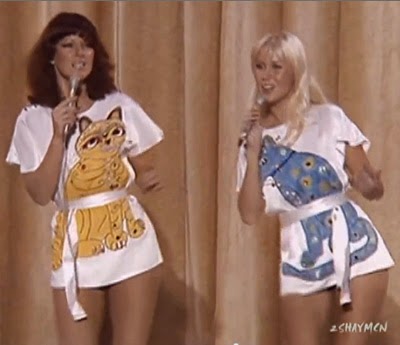 They say an octopus can move through any hole bigger than its beak!

Posted by Eolake Stobblehouse at Wednesday, February 05, 2014 No comments:

Smartphones versus DSLRs versus film [expanded]

Smartphones versus DSLRs versus film: A look at how far we've come, article. (The first page is here.)
Splitting the difference between candlelight and daylight, around 6 years of technology has made up for the massive difference in the size of the lenses and sensors between the best phone and the $2,000 DSLRs.
I was stunned.
This isn’t saying that the Nokia is a better camera than a 2007 Canon EOS 40D. It’s not. Detail makes up just a tiny fraction of the goodness of a camera, and none of what makes it a pleasure to use. The Nokia is much slower, can’t focus on moving targets, can’t easily defocus part of the picture, can’t change the perspective and feel of pictures by zooming or changing lenses, and can’t capture the same range of brightness in one shot that the latest SLRs can. Yet.
The curious thing about this list is that everything on it except one — changing lenses — can be fixed with faster processing.
-

I don't know how electronics will replace zooming or selective defocusing, but they probably will.

And so in 10 or 20 years, peasized embedded cameras will have replaced big, beautiful, specialized cameras, and I'll be a bit sad, because I like cameras as much as the results.

But just try and get this shot with any smartphone out there.

Canon 40D and a $200 lens I bought used, taken through a double-paned glass sliding door (and not a particularly clean one). Just saying.

Still, I have gotten a few pretty great shots with my iPhone 4 in certain light, just because it was the only camera I had with me. But I always wished I had a real camera with me once I started screwing with the shots in Lightroom.

Well, somehow and some day, phones will have zooms or tele lenses too.
And background blur can be nicely faked, just a question of easier masking.

It's true, we must remember all the things they still can't do. But we must also remember that these barriers are moving constantly.

Just like in Hollywood vs digital. I've just ordered for rent Side By Side, a documentary Keanu Reeves made about digital/film film-making.

I think it's Tarantino (and surely others) who gets *irate* about digital, like it's somehow forcing everybody to forever stay with the resolution of DVDs, instead of already now *enhancing* the quality and workflow of films remarkably. I just can't be having with that. Man is supposed to Think and Look a bit, not just... emote.

"The magic of movies is connected to 35mm."
I'm sorry, that's like saying that paintings has to be made with oil paint, otherwise it's not art. It's just such an incredibly limited viewpoint.

I'm guessing many people have had very strong artistic experiences when they were young, and they subconsciously have an equally strong association between that extraordinary experience and the medium it happened to be served on. So when that medium is threatened, they react badly.
Another example is knee-jerk attacks on ebooks "because they don't smell like books". (The only time I notice the smell of books is when they've been keept in humid rooms and smell a bit of mildew.) Take the text out of the books, and you just have dead trees.
Posted by Eolake Stobblehouse at Monday, February 03, 2014 6 comments: