Pirates of the Caribbean... 4?

I see that there's a fourth one of the Pirates of the Caribbean coming out. A fourth one, really? I found them enjoyable, but...

I'm reminded that Johnny Depp was asked in his Actor's Studio interview why he had never played a leading man, and he answered that he "refused to be made a commodity". Huh. The Pirates films are based on a theme park game, it hardly gets more commercial than that.

... And Nicolas Cage is in a new action movie, one of those fast-car thingies. Sigh.
I used to wonder: how much money do these people really need? But then I looked at the Hollywood lifestyle. If you are a big star, you just can't really settle down in an apartment in a reasonably priced neighborhood. For one thing, you wouldn't be left alone by gawkers and paparazzi. For another, and this is stupid, but: would you be considered for big-ticket movies if you look so unsuccessful that you "have to" live in a small apartment?
In other words, once you're successful in Hollywood, you're locked into a lifestyle so expensive that you have to keep being successful, or you're fokked.
That it is easy to over-do a lavish lifestyle is another thing of course.
Posted by Eolake Stobblehouse at Saturday, February 19, 2011 7 comments:

Is the photograph taken by the guy who depresses the shutter, or by the person directing the shot?

And how much can you delegate, and still claim authorship of a work? 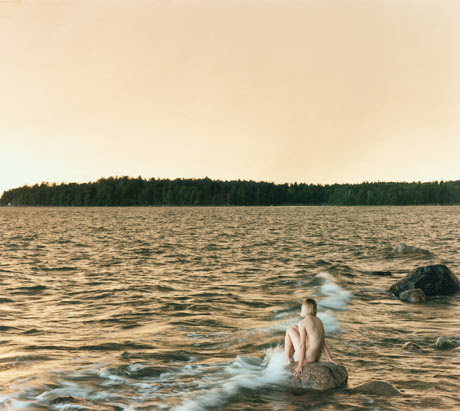 I think there are no final answers.
Posted by Eolake Stobblehouse at Saturday, February 19, 2011 9 comments:


Writing is not necessarily something to be ashamed of, but do it in private and wash your hands afterwards.
-- Robert Heinlein
Special-interest publications should realize that if they are attracting enough advertising and readers to make a profit, the interest is not so special.
-- Fran Lebowitz
Posted by Eolake Stobblehouse at Saturday, February 19, 2011 No comments:

[Thanks to Irv.]
"People said it was my smile. That I looked very happy, that I enjoyed my work, and I did." -- Bettie Page

I agree. Bettie's body was fab, but it was her happy and beautiful smile and vibe which made her rare. Joy goes much deeper than mere sex.

And:
"They keep saying I'm some sort of 'sexual innovator'... I never thought of any of my poses as being sexual in any way, I never had anything like that in my mind." --- Bettie Page

I think the model trying to be sexy is usually detracting.

"I never thought I was doing anything wrong by posing nude, because after all, I don't believe God disapproves of nudity, he put Adam and Eve in the Garden of Eden, naked as jaybirds..." -- Bettie Page
Posted by Eolake Stobblehouse at Friday, February 18, 2011 8 comments:

I got me a Lensbaby "Tilt Transformer", which will let you put a Nikon lens on a M4/3 body and tilt it to change the apparent depth of field.
There's no precision adjustments, so it's a little fiddly (and focus and aperture are manual), but then it's less than 1/5th of the price of a Nikon tilt lens, and you can use different focal lengths on it.
Below is tilt along the plane of the subject, and then opposite that plane, which is popular at the moment to make things look like tapletop photos. It's a Nikkor 24mm F:2.8, first at F:11 and then F:2.8 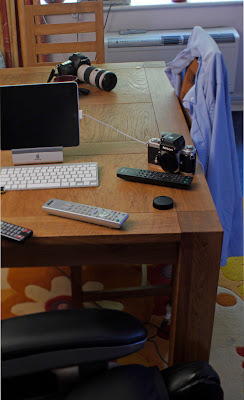 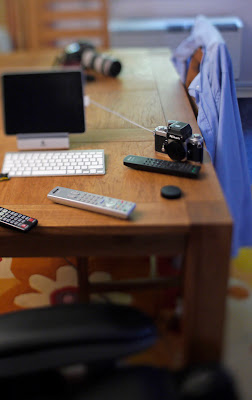 With the modern lenses without an aperture ring (Nikon G lenses), you have to adjust the aperture by unlocking the lens and turning it, which is less than optimal, so I used one of my old-time lenses.

Here is a wiki article about tilt (and shift) lenses/photography. It's not that weird once you get your head around the geometry.
Posted by Eolake Stobblehouse at Friday, February 18, 2011 4 comments:

---
We've been thinking this way a long time, but does it really make sense NOW?:

---
(From this week's Domai newsletter (has nudity).)
Posted by Eolake Stobblehouse at Friday, February 18, 2011 4 comments:

The film has a very different story from the book.
But fortunately it is good. I would even call it surprisingly good. It is really funny for one thing. John Goodman is priceless as the villain.

And I like their sort-of timeless choice for the design. Most of it is almost a period piece, beautifully designed like the fifties, the muted greens and reds and so on. Very nice. But then they will suddenly have the occasional thing, like small mobile phones. But they are mobile phones like they might have looked like if they were designed in the fifties! Great stuff.
Posted by Eolake Stobblehouse at Thursday, February 17, 2011 No comments:

I'm almost done with Troll 2. (By the way, it's not a sequel, and it does not have a single troll in it!)

I was reminded of an old Bloom County strip (mid-eighties, I think), which I remembered almost verbatim, and holy moley, somebody had posted it once!
"... But lord, it wasn't good!"

Panel 1: “George Phglat’s new film “Benji saves the Universe” has brought the word ‘Bad” to new levels of badness.”
Panel 2: “Bad acting. Bad effects. Bad everything. This bad film just oozed rottenness from every bad scene… simply bad beyond beyond all infinite dimensions of possible badness.”
Panel 3: [Opus pauses for a moment of contemplation.]
Panel 4: “Well, maybe not that bad, but lord, it wasn’t good.”
Thanks.
Posted by Eolake Stobblehouse at Thursday, February 17, 2011 1 comment:

I'm impressed with the success and product range Lensbaby has achieved in a couple of years since they first arrived with their small plastic tiltable lens (the Muse).

The old is new again

[Thanks to Drew.]
Irina Werning has photographed people like they were in photos many years ago.
We've seen similar projects, but I have never seen this attention to detail! Impressive. That is very difficult to do. 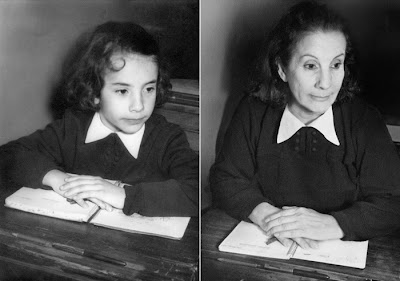 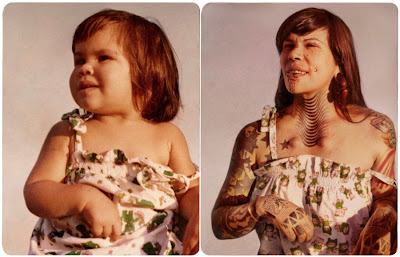 Even down to the expressions! Look at this: 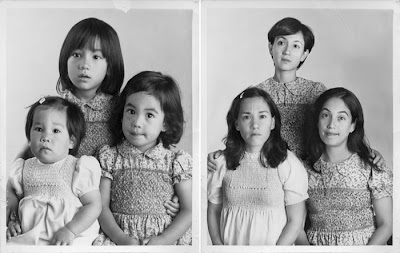 (Rolling On The Floor Laughing.) This is a photo of a Vine Flower apparently. No, really, it is a flower, and no photoshopping much.
And people say that Georgia O'Keeffe's flower pictures are, uhm, sensual! 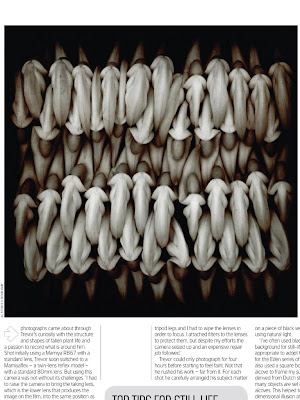 Photo by Trevor Ashby, via Amateur Photographer
... If we stand erect together nobody can take us down!

The article is apparently not online, it's from this week's issue. 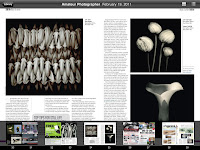 Troll II is famous for being one of the worst-rated movies in history. And not for nothing. Everything about it is so bad that my toes never have time to uncurl, and every few minutes I actually physically cringe at the pain of the clichédness of it. I'm not kidding, I can't even help it. It really is hard to watch.
It's funny, I actually have difficulty using the word "movie" about this thing, it degrades the word.       :-)

I think the one thing it has going for it is some real purty actors. Apart from that, it is good in that it gives one lots and lots of chances to feel superior when watching it. That's good fun. (Oh, and actually the cameraman was very competent, though you don't often notice for the horrible editing.)

The really amazing thing, though, is that it just gets worse and worse  as it goes on. Truly entertaining. And there's not a grain of irony in it.

I'm looking forward to watching the documentary about it, Best Worst Movie. I haven't seen so many, but there's indeed reason to believe that as bad movies go, this may be the ne plus ultra. 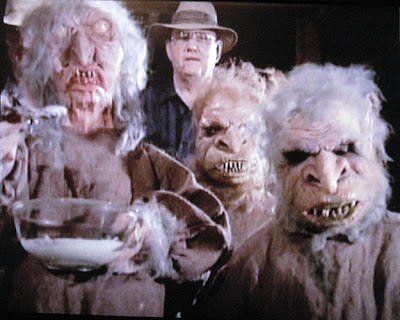 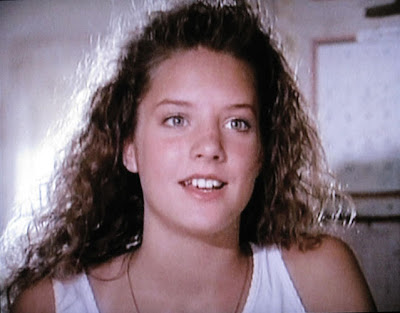 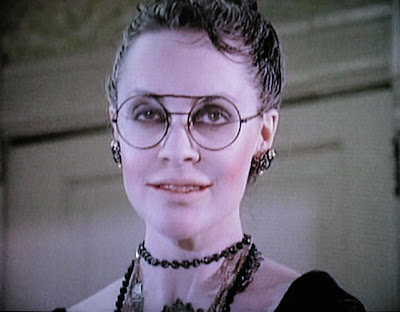 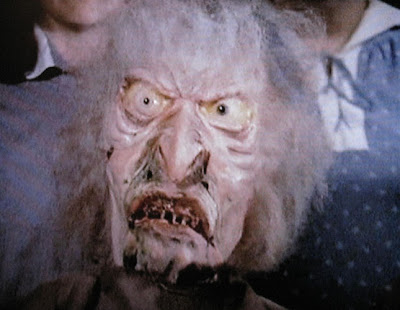 That's the only expression this guy has.
By the way, the chick in the glasses, I kept wishing to see her without the make-up. Lo and behold, near the end we do, and yes, she's a smoking hottie! Oh, and she is also the one actor in the flick who knows what kind of movie she is in, and over-acts accordingly, adding intentional humor to the tonnes and tonnes of unintentional humor.
Posted by Eolake Stobblehouse at Wednesday, February 16, 2011 2 comments: 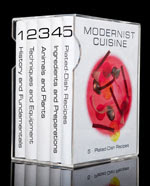 The Game-Changing Cookbook, article, thanks to TCGirl.
"... assemble 2,400 pages of results into a 47-pound, six-volume collection that costs $625 and requires four pounds of ink to print."

One might say: wow, impressive. And it is.  But I feel more like saying: wow, what hard-core use of trees and ink. Put the whole thing in an iPad instead. It becomes portable, searchable, and upgradable, and you can use it without fear of getting egg white on the very expensive pages. (Just put the iPad in a clear plastic bag.)
Posted by Eolake Stobblehouse at Tuesday, February 15, 2011 7 comments:

I've long thought that the hard disk was perhaps the biggest bottle neck for speed in a personal computer. And it does seem that the lack of one, replaced by solid state memory in the iPad and MacBook Air is responsible for the high responsiveness of those systems, for they are much faster than their modest RAM and processors would indicate normally.

And now solid state drives are coming down in price, so... the issue is that that I can't fit all my files in a drive of less than 1TB or preferably 1.5TB or larger, and I'm not keen on splitting them up, it would complicate admin and backup procedures so... I'm still thinking about it.
Posted by Eolake Stobblehouse at Monday, February 14, 2011 9 comments: