Marge and the children

Just watching the Simpsons episode from season nine, with Marge and Homer's balloon ride. I can't believe that they got away with showing Marge Simpson nude. And I can't believe I liked it so much. That's just twisted.

Also I was not aware that "Think of the children! Won't somebody please think of the children!?" was a quote, and a satirical one. I love it. I wonder if this was the first appearance of it? (Man, the concept even has a wikipedia entry.) (Update: this guy has a comment on it.)

Update: the episode ("Natural Born Kissers") did not only have female nudity (which for some reason seems more controversial than male) (seriously, what's that about?), but was also about Marge and Homer's sex life. And apparently it was the only one ever where Fox actually wanted to ax it. And it was banned for children in Australia. -- In the commentary they mention that the episode "belonged to a different era", they couldn't do it today. Though the rerun is still shown. What kind of a hell must it be inside the minds of people who get offended by a cartoon boob?
Posted by Eolake Stobblehouse at Saturday, May 31, 2008 8 comments:

It's funny, on the one hand universal love and beauty are to me obviously the most important things in the world, on the other hand when this point is made in just the wrong way, it makes me want to puke. I'm not really sure what it is.
Posted by Eolake Stobblehouse at Saturday, May 31, 2008 8 comments: 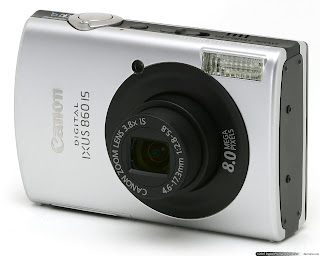 Somebody wrote me and asked for advice about finding a compact digital camera with a wide-angle lens, and I didn't think any existed. But then I got curious and googled around for it, and I found one which seems like it's really nice, the Canon Ixus 860 (in the US it's called SD870). The reviews are good, and I have its brother, which is excellent. Review and review and review. Update: I had not noticed this video review.

Compared to the one I have (960), it has 8MP instead of 12MP, which is not important. And it has no optical viewfinder, which is good because it allows for a bigger LCD screen. And the zoom goes out to 28mm equivalent, which I love. And it keeps the image stabilization feature, which you shouldn't be without, it saves so many pictures in dubious light, like indoors.

Oh, and personally I think the "black" version as pictured looks much better than the 960 with its super-gloss "iPod" parts. Also, it's marginally smaller and lighter. But like the 960 it has the nice ISO-auto-shift feature, which is surprisingly useful. For instance when I photographed a place like this, I walked in and out of light and shadow, and even in and out of doors, and that feature made sure the low-light pictures were not shaken, while still setting a low ISO for the strong-light settings so the image quality was optimal, without me having to give it a thought. This is one of those pleasant modern features I could not have dreamed up myself.

It's funny, by the way, the feature that Canon don't promote prominently (like on the box) is the wide-angle zoom. I would have thought this was the raison d'être of the camera.

Quote from DPreview:
"Like other cameras in this range what makes the SD870 IS so appealing - aside from the high quality design and construction - is the 'point and shoot' reliability, which produces good, sharp, well exposed results in a wide range of shooting conditions, something you simply can't say about a lot of competitors. We were also very impressed with the lens; a wide lens usually results in a compromise between the really useful ability to 'zoom out' and a degree of chromatic aberration and corner softness that can dent image quality. Our tests and experiences of real-world shooting show very little evidence of these expected shortcomings, helping the 870 IS stand out from competing wideangle ultra compact cameras." 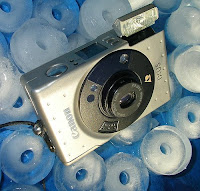 Update: I think the Canon Ixus cameras are tremendous. I have owned several. I remember seeing the first one, pre-digital, in a camera shop. I asked the clerk: "what's that weird looking camera?" He got sort of offended, which is funny. But the high-quality metal construction (update: the 860 is actually part plastic, but at least it looks nice, unlike most silvery plastic), the strong design factor, and the overall high quality are just neato.

This photo set was taken with my first Ixus, at just 2 megapixels.

Update: funny thing, sites such as imaging-resource.com make such detailed reviews that I find it easier to learn about the features of a new camera by reading their review than by reading the manual!
Quote from that site:
"The SD870's 8-megapixel sensor delivers resolution capable of delivering good quality 11x14-inch prints up to ISO 400, an impressive feat indeed. Canon has increased the size of the LCD but removed the optical viewfinder; optical viewfinders being something of a joke on most digital cameras with extraordinary optics, most users won't miss it. The 3-inch LCD more than makes up for the lack of a viewfinder, and works well in bright sunlight. At 180 grams (6.3 oz), the Canon SD870 IS can fit in almost any pocket, and uses a battery that can take a pretty decent number of photos. It's a lot of camera fit into a small package, and I think it's a great fit for the experienced digital camera user who needs a reliable, take-anywhere shooter that shows off its photos well. And I can't emphasize enough how great it is to have a 28mm wide angle lens in such a small package..."

Erowid is an interesting site: it's about drugs and includes unregulated reports from thousands of readers about their experiences with all kinds of drugs. I think it's valuable because drugs is one of those areas where the hysteria is so great that it's hard to find information which is not strongly tinted by some political agenda. For the "establishment", drugs (unless sold by highly profitable pharmacies) are the Great Evil. For the anti-establishment, drugs are the way to "go free and beyond". I suspect both extremes are BS.
Posted by Eolake Stobblehouse at Thursday, May 29, 2008 3 comments:

I'm interested in what happens in the minds of killers, especially those who you can't explain away as psychotics, like people who actively participate in genocides like the holocaust or Rwanda 1994. If we overlook those who merely participate out of fear of becoming victims themselves, it still leaves way too many people who one would never expect to be murderers, but yet takes machettes or guns to neighbors who they know are innocent. What is happening in their minds? What do they think? How do they experience it? Is it a rush of bloodlust? Does it feel like they are possessed? Do they feel taken over by mob emotion? Do they feel rage against another ethnic group? Do they not think at all? What?
Posted by Eolake Stobblehouse at Thursday, May 29, 2008 10 comments:

"... when you donate to a major religion, you support its expansion, which means you’re facilitating the enslavement of your fellow humans."

I'm with him so far that those with muscles in the mind can possibly make more spiritual progress outside an organized religion, but to cast the religions as the Villain is no better than doing the same thing to "terrorists" or governments or people of another race or culture. It's all the same trap. The problem is not "out there". Villains belong in pulp fiction, not in the mind of a serious seeker.
Posted by Eolake Stobblehouse at Wednesday, May 28, 2008 17 comments:

About being your own man

"Avoid the crowd. Do your own thinking independently. Be the chess player, not the chess piece."
-- Ralph Charell

Good advice, but isn't it a bit obvious? Like "don't stand in the rain"?

Or rather, people who need that advice, do you think they understand it?
Posted by Eolake Stobblehouse at Tuesday, May 27, 2008 13 comments:

A white tiger, photographed under water? Say what you want, but this is not a picture anybody could take.
(Photo by Jeff Rayner.)

That's in contrast to one of the last pictures I saw when I was frequenting the local photo club in these parts the year before last. I'd been coming a couple of months, and I'd grown a bit tired of the unventilated presentation room and the general lack of any talk about actual photography amongst the members.

And then they had a judge for the monthly contest who claimed that the title of a picture should be an explanation of that picture, a dead stupid idea. In the end he awarded the first price to a breathtakingly boring picture of a monkey. Sure, the monkey was sitting in the open in India, so maybe it could be regarded as exotic, but monkeys are as common as dogs there, and seriously, the picture could not have been more banal. I got so bored my head hurt, so I stopped going.
Posted by Eolake Stobblehouse at Monday, May 26, 2008 11 comments:

I've only watched part of it yet. But what strikes me is: how can anybody live with hair like that. It would drive me crazy.
Posted by Eolake Stobblehouse at Monday, May 26, 2008 5 comments:

There was a time when we expected nothing of our children but obedience, as opposed to the present, when we expect everything of them but obedience. -- Anatole Broyard
Posted by Eolake Stobblehouse at Sunday, May 25, 2008 16 comments:

Peter Marshall
What are “dual-purpose cattle” good for that other cattle aren’t?
Paul Lynde
They give milk and cookies — but I don’t recommend the cookies.

Peter Marshall
Imagine you are a child in your mother’s womb, can you detect light?
Paul Lynde
Only during ballet practice.

Peter Marshall
When a couple has a baby, who is responsible for its sex?
Charley Weaver
I’ll lend him the car. The rest is up to him.

Peter Marshall
Before a cow will give you any milk, she has to have something very important. What?
Paul Lynde
An engagement ring.

Peter Marshall
According to Robert Mitchum, one thing has ruined more actors than drinking. What?
Charley Weaver
Not drinking.

Peter Marshall
When the Lone Ranger finished with a case, he left something behind. What?
Paul Lynde
A masked baby.
Posted by Eolake Stobblehouse at Sunday, May 25, 2008 6 comments: