This is Rachel, she was at ComicCon, asking the actors from Big Bang Theory to sing Soft Kitty in a round...
I love cute geek girls. I think maybe I missed out, never going to college. 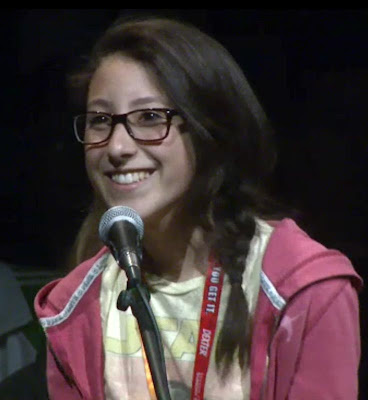 Here is the first legit photo of SuperCat, NYC's legendary and controversial feline superhero, who has been the scurge of evil-doers and big dogs in Central Part this year. 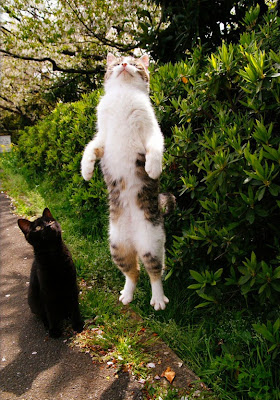 Cats, like men, are notoriously poor at expressing their feelings, but sometimes they use subliminal codes to do so. 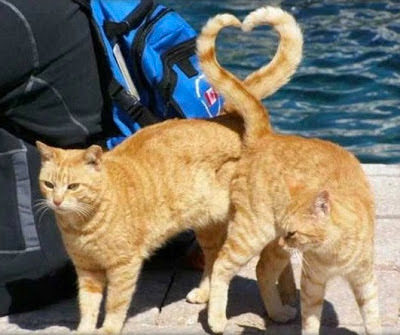 Are moles a threat?

I sometimes get letters from people who are worried about moles on the models on my site. They worry they are a sign of cancer.
I think they are more common than people think, it's just that most sites and mags photoshop them away.
So I asked our pal Dr. Pascal. He wrote:


Moles are in their vast majority completely benign. Otherwise, 99% of us would die from metastatic melanoma!

See the "Signs and Symptoms" and "Diagnosis" sections on this page.

One extra element that's seldom mentioned to the general public, along with a Doctor's intuition, is the importance of chronology.
The majority of cancers evolve on a SUB-ACUTE time scale, meaning over the course of a few weeks. Acute is within hours or days at most, while chronic is within the scope of months/years.
Usually, we notice something on our skin for the first time as if "out of the blue". But if a skin peculiarity evolves (grows and/or transforms) within, say, 3 to 5 weeks, it's time to have it removed and examined by a proper lab.
Hence the importance of monthly breast self-examination.
Note: not everything of sub-acute chronology is a cancer, of course!!!

Final note: the ABCDEFG are good reliable criteria for when to act (without panicking!), but they can never be infallible. Medicine is all about risk assessing and managing. We often remove something that turns out to be benign (>90%, easily), but on the odd occasion, something which showed no warning signs whatsoever may turn out to be nasty. Once out of 10,000 or 100,000 times.
Simply put, the money & time & human cost of treating everything that could possibly be bad, would be completely unrealistic. There simply wouldn't remain any time left for just, you know, living life.
I know such people, who spend almost their every waking moment "taking careful care of their health". That's a severe obsessive-compulsive disorder, and a guaranteed fun-killer of life's enjoyment...

The rule of thumb is logic, common sense, and perspective. Guns kill far less people than cars, and yet we don't declare panicked war on automobiles. I believe that any random thing less risky than crossing the street (after looking both ways twice) is something we should just take our chances with.

Posted by Eolake Stobblehouse at Thursday, December 27, 2012 No comments:

Posted by Eolake Stobblehouse at Thursday, December 27, 2012 No comments:

I love Isabella's singing and body language at the end, wonderful and loving musical parody.

Posted by Eolake Stobblehouse at Tuesday, December 25, 2012 No comments:

It's funny, I always relax better on Christmas. Even though I don't have more to do on any regular Sunday.
Perhaps it's just the mind expecting you to be more Off. Perhaps it's that nigh everybody is Off on Christmas day, so there is less noise, both mechanical and mental.
Posted by Eolake Stobblehouse at Tuesday, December 25, 2012 4 comments:

Update:
Oh, durnit! Fooled by incomplete information! In the Video app on my iPad it said "29 days left" on the top. But apparently that's only the deadline one has to *start* the movie. Worse, when I clicked Start, I was told that I didn't even have 48 hours to finish it, but only 24. It seems 48 is only in the UK. It's crazy.
(iTunes on Mac has a tiny note about these times, but the iTunes app on iPad shows no clue about the draconian deadline when you're about to rent.)

Again, I really don't see what they have to loose by giving us a month! It's not like they need a tape or disc back to rent it to somebody else. And I think that many would rent more movies if they have less stress about whether they can finish it in time.

---
Wow! Proof that Apple listens to me! I complained some months ago how 24 hours for an online movie rental was much too little and that 48 hours, while better, was not all that great either, and I didn't see any downside if they would just go whole hog and give a full month to the rental period.

Today I tested a rental from the US iTunes store, and lo and behold, it's 30 days now! Cool, this makes it much more useful for the many of us in the Internet age with minuscule attention spans, who jump around between tasks like frogs on a hot tarmac.

And it's really not that many movies I want to keep on disk. These days the offerings and consumption is simply much too great, not like the eighties when you might watch a movie or two a week. And if I really want to watch it more than once, even three times rental is less than the price of buying it.
It's a downside though if you like the DVD extras. They ought to append those.
Posted by Eolake Stobblehouse at Monday, December 24, 2012 No comments:

"Go on" and Laura Benanti

I'm becoming quite fond of Go On, Matthew "Chandler" Perry's new show. It's quite funny, and it has heart. And it has Laura Benanti. OMG, whattawoman. Excellent actress too, I think she could play anything serious, but she's also really funny in a super-subtle way. Masterly confident. 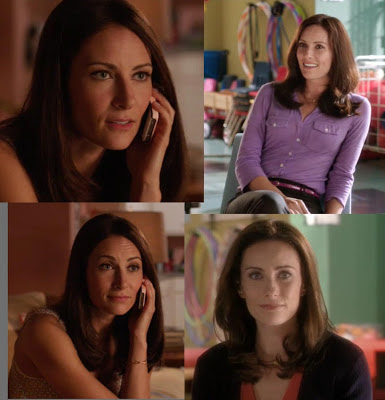 She has her own web site, good for her, I've often been a little shocked at how many actors don't. That's like having a shop, but no sign or show-window.

The trailer is long, and if you hate spoilers even for comedy, you may want to avoid it.     :-)

Posted by Eolake Stobblehouse at Monday, December 24, 2012 No comments: