JK Rowling opens her own site, Pottermore,  for gaming (of some sort), audiobooks, and ebooks.
Probably smart. Somebody of her unique stature doesn't need to deal with Apple's and Amazon's bureaucracy, nor to pay their 30%. They don't add anything to justify that, she brings the customers now, not the other way around.

BTW, there are also authors of far, far lesser stature who say that they earn much more by *not* selling on amazon, due to Amazon's habitual discounts eating up the author's profits.
Posted by Eolake Stobblehouse at Thursday, June 23, 2011 2 comments:

Lytro is one of the the new type of cameras they have been promising us: which can capture light in much more complex and intelligent ways, so that you can change focus and perspective after the shot is taken. We don't know how close it is to commercial viability, but it seems promising. Not a lot of solid data here, like photos of prototypes, so surely not this year.
Posted by Eolake Stobblehouse at Thursday, June 23, 2011 3 comments:

TidBITS Business Apps: Nisus Writer Pro 2.0: The Review, TidBITS article.
This is a serious tool for people with heavy-duty writing needs — those writing books, dissertations, academic papers, legal documents, and other complex works are most likely to benefit from what Nisus Writer Pro can do best: manipulate text, in almost any way you can imagine. Need to go through a 950-page alumni directory and change every entry in the form “John Smith, Class of ’72” to “1972 [tab] SMITH, John,” with the year spelled out, the last name in uppercase, and the first name in italics? Nisus Writer Pro can do it in seconds. That sort of power is what sets Nisus Writer Pro apart from every other word processor.
Posted by Eolake Stobblehouse at Wednesday, June 22, 2011 8 comments:

A Resurgence in Art Buying Over the Web

A Resurgence in Art Buying Over the Web, NYT article.
Mr. Sledge, and a growing number of collectors like him, have lately been demonstrating that connections may not be as important as they once were — and that online sales, a segment of the art business given up for dead not long ago, are becoming an increasingly important part of its future.
Posted by Eolake Stobblehouse at Tuesday, June 21, 2011 No comments:

Posted by Eolake Stobblehouse at Tuesday, June 21, 2011 No comments:

From Sinfest.
Posted by Eolake Stobblehouse at Tuesday, June 21, 2011 3 comments:

Where the sun bakes the dust...

Middle East is funny, ain't it? Not only do people stay there for some reason, but they actually continually fight over who gets to stay in that sun-baked, dusty, barren hell.
Posted by Eolake Stobblehouse at Monday, June 20, 2011 7 comments:


I'm a little amazed to find a couple of versions of this on youboobs, since when I tried to find the CD Teases And Dares (or any other versions including online) a couple of years ago, it couldn't be found for love nor money. Finally I found one and paid through the nose to a guy in Shanghai or some place. But since then it seems Kim Wilde has had a renaissance, now all her CDs are on Amazon. I'm happy for her, and I hope it's giving her some income these days, because I thought she was very good pop music.
(I say "hope" because some musicians are lucky and get a steady little or big income on old work if it sells, but others (Janis Ian for example) don't see a dime from continued sales, it all goes to the label.)
Posted by Eolake Stobblehouse at Sunday, June 19, 2011 2 comments:

Funny about TV shows: nobody closes a door they have walked through, not even outside ones.

Just like nobody finishes a drink. The come in, they are offered a coffee say, they get it supernaturally quickly, they say their bit, and they leave without having touched, much less finished their coffee.
Posted by Eolake Stobblehouse at Sunday, June 19, 2011 6 comments:

Does cycling in a skirt make you a motoring hazard?

Does cycling in a skirt make you a motoring hazard? article.
Jasmijn Rijcken was stopped and almost ticketed by an NYPD officer for biking in this outfit. Her skirt, the officer said, was too distracting for drivers. 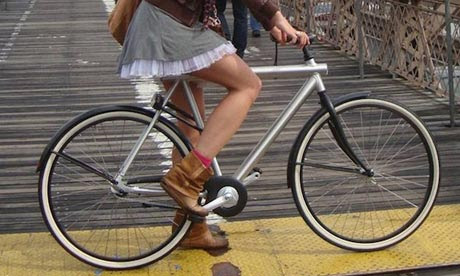 Me, I think it's worth it.
I'm only half kidding. We could drop traffic deaths to zero by banning motor vehicles, but it seems everybody agree that the convenience is worth hundreds of thousands of deaths every year. That's what it is, isn't it? So clearly while human lives are valuable, the value is far from infinite.

A reader, Anna, said:
Actually I had this thought when they put huge posters (ads) on the wall of a house with a woman in underwear on it just at a place where the driver needs to turn. I think that is dangerous, and it is aimed at distracting the driver! Those could be banned. But I guess they bring money, so they are not bothered. :)

Indeed, one often sees how flexible ethics really are when money suddenly enters into an equation!
Posted by Eolake Stobblehouse at Sunday, June 19, 2011 10 comments:

In an episode of Big Bang, Sheldon, in a feud with Penny, gets her underwear (left unattended in the laundry room) onto nearby telephone wires.

Got me wondering: it's been donkeys years since I've seen any telephone wires in any country. Do they still have them anywhere in the Western world?

BTW, I remember a comment in a periodical: originally when telephone wires went up, there were many protests about them ruining the landscape and being ugly. Then many years later when they started to go down when they put them in the ground (I guess that would always be fiberoptic, yes?), everybody by then had paintings on the wall of streets or landscapes with telephone wires hanging there gently, so then people felt regretful that they went away! I suppose it's a lesson about beauty being in the eye of the beholder.

(Hmm, I wonder why they were put on poles instead of in the ground originally. I doubt it can have been much easier.) (See comments.) (Thanks to Bert for the link to this amazing picture.)
Posted by Eolake Stobblehouse at Sunday, June 19, 2011 18 comments: