(You can find the source videos here and here.)

Maybe it would be more lovin' to stop making fun of him after ten years. But heck 1) it's still damn funny, 2) The music is cool. 3) Somebody behaving like that on stage has thrown away all claim on dignity all by himself.
Posted by Eolake Stobblehouse at Saturday, September 17, 2011 1 comment:

Richard Franiec continues to make custom grips for high-end compact cameras which inexplicable are missing grips. I have his grip for the Canon S90, and the new one for Olympus Pen Lite (aka "E-PL3") seems equally gorgeous, and I've already ordered it. If I were a camera maker, I'd buy the design off'a him. 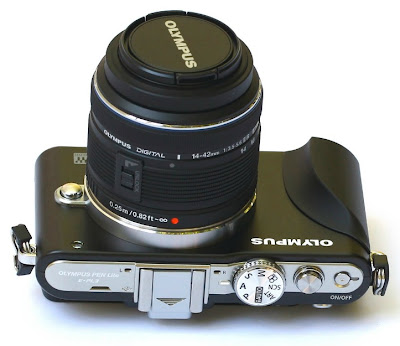 The Pen Lite, by the way, is pretty amazing. I think it's the smallest Micro-Four-Thirds camera yet, and it still manages to have a flip-out screen, and the fastest auto-focus on any compact camera yet (as fast as on DSLR cameras). All of those are traits which I have valued highly in cameras for a long time. (The much bigger and more expensive E-P3 doesn't even have a flip screen.)

It'll be interesting to see how it performs with the upcoming 45mm F:1.8 portrait (short tele) lens, a sort which has been missing from the platform until now. The lens is supposedly very good (lenses of that focal length often are), and not even very expensive (unlike the new 12mm wide-angle lens). (To get the 35mm equivalent focal length of a M4/3 lens, just double it.)
Posted by Eolake Stobblehouse at Friday, September 16, 2011 1 comment:

I just got the captcha (distorted confirmation word) "buggrox" on another blog. For sure I'm gonna use that for swearing!

It's funny, I wonder how it's decided what's rude. The F-word is still bad, but not as bad as the C-word. Hmmm, I think that it's connected to social guilt about oppression in the past, since that word was aimed at the female gender. The fear of offending makes us take the side of the offended, thus building up the strength of the feelings of being offended, which increases the fear of it, which...
Posted by Eolake Stobblehouse at Friday, September 16, 2011 4 comments:

I've been having Traditional Danish sausage and cheese for lunch for days, since my sisters brought some with them. It's delish to a Dane, but man, I'd almost forgotten how fatty it is. I feel so heavy after eating.

But I guess most "traditional" foods are not exactly what people would call Health Food these days. I once had a "traditional English" lunch in a restaurant, lots of bacon and sausage, positively swimming in fat. I nearly couldn't stand up after that meal!

I suppose it's connected to most people having physical work in the olden days, whereas the most we lift these days is the computer mouse. If you work hard in the fields or such all day long, it's more desirable to get a 3,000-chalorie meal. But we still often want the heavy meals, 'cuz they kick off the ol' brain pleasure centers.
Posted by Eolake Stobblehouse at Friday, September 16, 2011 16 comments:

Many, if not most, books I've read on investing say that stocks are the rocket ride to riches. But even if it is true in the long run, which I'm not sure about, it seems to me that it takes hard work and an iron stomach to handle that roller-coaster ride. Especially now, when disaster bells are clanging all over the world.
For people who like reasonable financial security without having to worry too much about it, there's a book which our long time reader Timo recommended me a few years ago: Fail Safe Investing by Harry Browne. It has a simple philosophy of four kinds of investments which balance each other out: They will never all go down simultaneously.
And here's an article which shows how that golden advice is more relevant now than ever.

Update: Jan said:
Thank you! I love Harry Browne's investing ideas.
It's designed to preserving your money during troubling times and so far has done admirably well.

Update: here's an interesting article from a favorite site: Lemmings. (This site can be trusted.)
Posted by Eolake Stobblehouse at Thursday, September 15, 2011 2 comments:

"Google doesn’t get people, it sells them"

Don Norman: Google doesn’t get people, it sells them, article.
“They say their goal is to gather all the knowledge in the world in one place, but really their goal is to gather all of the people in the world and sell them.”
[...] “Google doesn’t understand people,” he said. “Have you ever spoken to a Google support person on the phone? They don’t have them.

Here's another article, about the reason for Google's insistence on real names on G+. Is it to make people behave better, or for Google's future profits?
For example, there’s a San Francisco-based sex blogger named Violet Blue. She’s an institution in the Bay Area and very popular across the Web. Shortly after she signed up with Google+, her account was suspended because the service’s operators (or its algorithm) didn’t think that was her real name. However, Violet Blue really is her name, and her account was later reinstated (complete with a “verified” badge).
[...] He replied by saying that G+ was build primarily as an identity service, so fundamentally, it depends on people using their real names if they’re going to build future products that leverage that information.

The Psychology of Bitterness: 10 Essential Lessons

Contrary to countless pop culture depictions of cranky old men and bitter spinsters, depression is not a normal part of aging. [...]
New research offers a way for this at-risk group to ward off depression: "goal disengagement."

Just been checking my spam folder... isn't it astonishing that even after 15 years, the most popular spam promotions are still viagra and penis enlargement? Something tells me that lots of sex, and male inability to attain it, is a lively market.
Posted by Eolake Stobblehouse at Monday, September 12, 2011 1 comment:

My two sisters visited me over the weekend. Fun was had by all, and amongst other things we had a couple of excellent meals in my fave restaurants.

They also brought the foodstuffs Danish ex-patriots always miss, Danish yellow cheese, spegepølse (related to Salami), Danish pickled herring, etc. They brought so much that I got tired just helping to carry it home to my fridge from the hotel, I don't know how they managed to carry their own stuff besides.

To top it off, they've been cleaning out old family stuff, and they found that small Buddha statue I'd talked about. I don't regret buying the big one of course, it's really great. 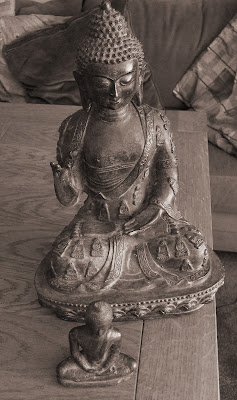 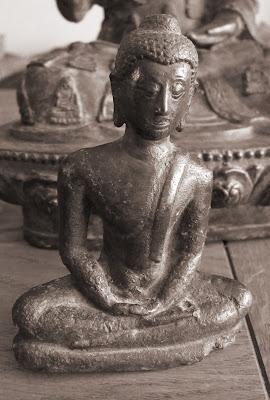 I was asked if I've become buddhist, and no, not really, only a non-dualist, and some aspects of Buddhism and Hinduism are the closest that traditional philosophies come to real non-dualism. Non-dualism is the belief that when we perceive many things, or any divisions at all, it's an illusion, only one thing exists, and it has no divisions. This thing one may call "That" or "The Universe" or even "God". (I prefer "Source" sometimes.)  This state is near impossible to grasp for the human mind, which is based in a highly dualistic universe, with splits and conflicts everywhere. But some teachings are based on the belief that Love and letting go of conflicts and grievances are parts of a Way which will eventually lead back to Oneness.
Posted by Eolake Stobblehouse at Monday, September 12, 2011 4 comments: