Here are the rest of the hometown photos. Go to stobblehouse home page and go to
Karrebæksminde Deux medium - large
(select medium or large images).
As you can see from the large images especially, the quality is pretty amazing from a camera you can have in your breast pocket. The Fujifilm F10 especially has much better low-light capabilities than other compact digicams. If the performance of this chip will spread to other cameras, big and small, it will change the field.
Posted by Eolake Stobblehouse at Friday, December 30, 2005 5 comments:

"What are you doing, Charlie Brown?"
"I'm a poor, lonesome cowboy."
"Why are you so lonesome, Charlie Brown?"
"Because all the other kids are playing Spaceman."
From Peanuts by Schulz
Posted by Eolake Stobblehouse at Friday, December 30, 2005 3 comments:

I had a dream I was chased by a horrible, half-dead monster through a big house. The house was mine, but much more complex. I was getting away from the monster, but I was still afraid, and I could still smell its rotten stench of death. I thought maybe that is just because the monster is dying.

I caught glimpses of somebody ahead of me, always disappearing. It seemed to be a beautiful woman, and she was glowing. Maybe she even had wings, I could not be sure. I followed her as best I could, and I was tired.

I went past big windows showing the world outside, and it was stormy. Big bat-winged things haunted the people, and the sun was under the horizon, but rising. And the air was clearer than it had been.

I almost caught up with the beautiful woman, and she went through a door I had not remembered. I followed her.

It was a glowing landscape, and I could not see it clearly yet, for my eyes had not evolved to see such energy. It felt like something amazing, something wonderful.

I sat down patiently and tried to evolve faster.

The end
Posted by Eolake Stobblehouse at Friday, December 30, 2005 6 comments:

Zeppellina said...
I have never believed that life is pre-determined.
Circumstances happen, and what comes next is determined often by our individual reactions to them.
I think we have the ability to decide how other people view us by the way we respond to them, and this often again changes what can happen next.
Creative people often suffer from self doubt, and, depending on their individual personalities, can adapt this self doubt into a destructive force in their lives.
I have many artist friends, some are victims, and unfortunately, will always be, and some are survivors.
Those who are victims have made themseves that way, as they have wrapped their problems around themselves like a comfort blanket, and wear their status as victim like a badge. When someone acts like a victim, others immediately treat them this way, and so it continues.
It`s a self-destruct switch which has been turned on.
Everybody out there has had really bad times in their life, artists and non artists.
It`s the ability to pick ourselves up and dust ourselves down which is the major difference.
I have an artist friend right now who I know will be more than likely, dead this year. He is beyond help, and it is a tragedy. Everyone has tried to help at every juncture, and all help has been rejected.
When he dies, as he will, there will be only a small band of us there to say goodbye. His work will be forgotten, as will he.
It is a tragedy beyond all reason.
But no-one will glamourise his life, it is just too dirty, smelly vomit ridden and beatings ridden.
He is just a poor soul who switched on his self-destruct switch and wrapped his suffering around himself like a blanket.
And I, for one, will miss him, it was a wasted life for one with such talent.
---
Yes, quite so.
I think it may be a while before mainstream humanity lets go of the idea that we are helpless in the winds of the Universe. For it is a very beautiful idea. Poets have made it so over the ages, I am not sure why. 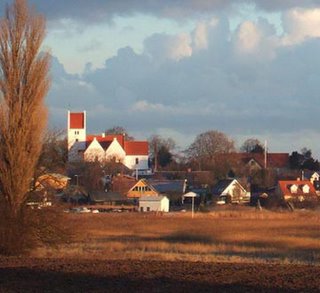 I visited the ole homestead over Christmas, and took some pictures (with the excellent compact-digicam Fujifilm F10), and this is one of the best results.
Fetch a large version (1000 pixels wide) or a very large version (1600 pixels)
It is the view from my sister's house. The church was one of the visual stable points of my childhood, and for many years I believed that churches always looked like that, they are that design, and white. Also (not visible in this picture) next to the church is a wonderful old windmill, and I also believed as a kid that a church and a windmill belonged together. Two things in close proximity are perceived as a unit.
By the way, my dad was the house painter master of the town, and he once renovated the whole church outside and inside, including the gilding of the clock and painting and marbling of the benches inside.
Posted by Eolake Stobblehouse at Thursday, December 29, 2005 7 comments: