Here is me at fifteen. Wasn't I cute?
Photo courtesy of my cousin Annette. Hi Annette. 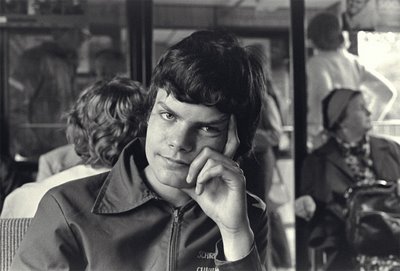 Free online film, "The Secret". Just one of many films and books these days who teach you that you get what you focus on or think about. Though the intro is a bit over-dramatic and money-oriented, it does it well though, what I've seen so far.
The film is very "American" in style, meaning very slick and flash, with enthusiastic people talking in soft and melodious voices in a very sincere way. It looks like a commercial. Still it works.

Another good one in the genre is What The Bleep Do We Know.

The video seems to be down. No surprise- it's technically not supposed to be free. ;)

Though I do wonder why they'd care as I'm assuming it's the original version. It's not like they're making profit off of that anymore and I would think spreading the word is the important thing. Ah well...

People who've seen it (or haven't but are still interested) might like to know that some of the people in the film have been on Larry King Live and will be again on the 16th. The first part was aired earlier this month and is supposed to be repeated on the 11th. The second part is set to air on the 16th.

If you'd like to watch the new version of the film legitimately, it can be found at: http://www.thesecret.tv

It's five dollars to view it online through the site. Not as good a deal as google video, but at least it's in higher quality. Er, assuming you've got the connection for it.

I would agree with Eolake on his criticisms, but it's still a well done film that does an excellent job of introducing people to the potentials of thought.

I just found this old photo of mine.
I think I took in on a compact 35mm camera, but unlike me I can't remember which.
Incidentally, the guy on the left is this guy (the friend who told me about his colleague). 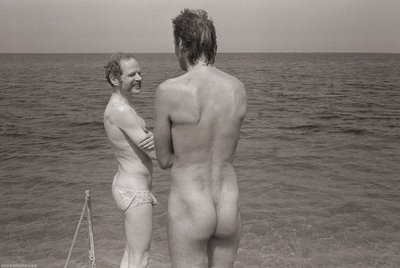 Aaaaall right, I guess it is time to post photos of my recent paintings. The first ones in more than 12 years!
Please click on them for larger view. Even so, be aware that they should ideally be seen live, since they incorporate thick paint, textures, imbedded objects, and wrap-around-the-frame. They are 60cm X 60cm. And 5cm deep. Acrylics on canvas. 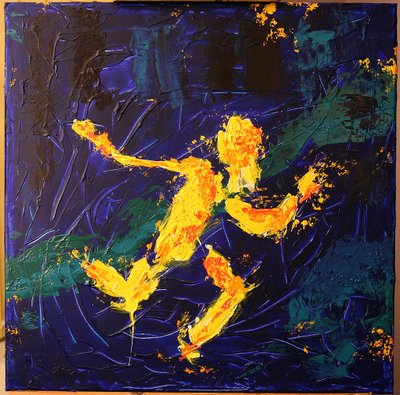 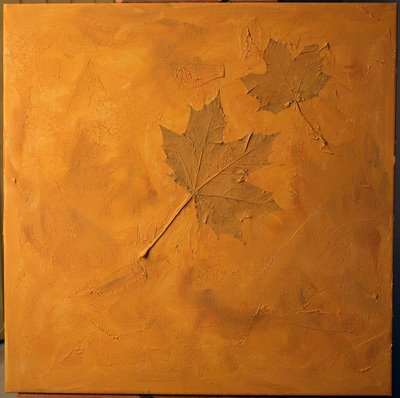 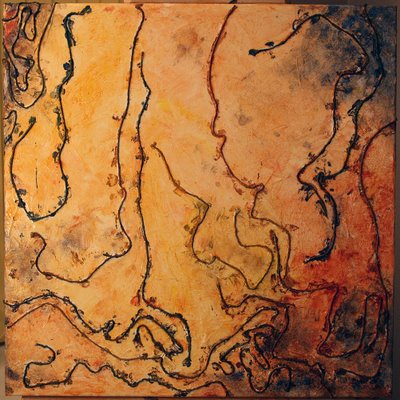 Lucid commented:
So long as we blame others for what we see in the world the fighting can never stop. Responsibility must be taken on an individual level and we must deal with our own demons if others are to be reformed. I believe I've stated before that to see change we must embody the change we wish to see. Absolutely nothing we try can ever work until we cease denying that the images we see are the reflection of our own selves.

It is something which is becoming more and more evident to many people, including me. It is not an easy lesson to learn. When "somebody else" does evil, of course "somebody else" is to be blamed. The desire to punish is worse, I believe, but even just the blame and judgement of this "other" is a trap.
I am currently reading The Disappearance Of The Universe, which is a very unusual book in this area. It goes beyond just handling the world, and aims for Salvation, and attempts to solve the issues of how and why did we separate from God, and what to do about it? Can we have both God and the world? Can we have both God and an ego?
To say this is advanced stuff is no exaggeration! It's like Buzz Lightyear's battle cry: "To Infinity, and beyond!"
Posted by Eolake Stobblehouse at Wednesday, November 08, 2006 16 comments:

Imagine what it would be like if TV actually were good. It would be the end of everything we know.
-- Marvin Minsky

The end is nigh.
TV is now good. Like I have said a few times, I believe we are now in the golden age of TV. Shows like The Sopranos and Gilmore Girls are as good as I can imagine them. Funny, consistent, gripping, well written, realistic, beautifully acted, perfectly filmed...
Posted by Eolake Stobblehouse at Wednesday, November 08, 2006 11 comments:

TidBITS has a 50% off sale on their excellent small "Take Control" e-books.
Posted by Eolake Stobblehouse at Tuesday, November 07, 2006 No comments: 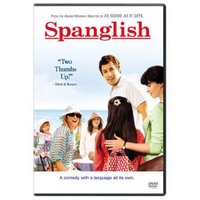 "So tell me again why I can't call him again?"
"Besides his cell phone being turned off?"
"Yeah."
"Forty messages start to look needy."

That's from the movie Spanglish, which to my delight is rather more than Just Another Silly Sandler comedy. It's delightful, actually. Sandler is subtle as the cook. Tea Leoni is great as the poster girl for High Strung Wife in SUV. And the kids are awesome. I keep telling you, it is indicative of rising human awareness how child and teen actors keep reaching new levels of power.

That reminds me, I meant to mention MirrorMask, Neal Gaiman's and Dave Mckean's fantasy film. It is a family film, and the story did not glue me to the LCD screen, but the visuals are fantastic, and so is the acting, particularly the lead, Stephanie Leonidas as Helena. Both subtle and powerful.

BTW, this pisses me off about the film industry (and MirrorMask is not even a Hollywood picture): when the lead is a child or teen actor, he/she does not get first billing as she would if she was an adult! For shame!
Posted by Eolake Stobblehouse at Monday, November 06, 2006 5 comments:

The Disappearance Of The Universe

You have heard that it was said 'an eye for an eye and a tooth for a tooth.' But I say to you, do not resist one who you think is evil.
- J, quoted in The Disappearance Of The Universe 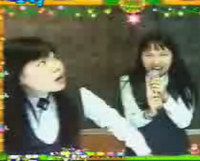 Culture is surely a manifold thing, lo the Crazy Korean Girls video.
What's interesting is that it isn't clear whether these girls have great comedic talent, or it is unintentional.

I like one of the viwer reviews in Engrish:
Sakaii wrote: Ours you they are a show whenever I enter in the Youtube I visit voceis. You have that to mainly make shows for the countries in Japan, Brazil and United States. Well for where stroll says of you two. I am its fan? e clearly has that to make more video Good bye
Posted by Eolake Stobblehouse at Sunday, November 05, 2006 5 comments: