[Big update below the images on casting the top plate.]

As the stalwart reader will be aware, I have a modest camera collection.
I am not a serious collector, those who only buy mint (flawless) exemplars and don't touch them without cotton gloves, and give thought to the monetary value of his collection. I just have them because some cameras, like some other machines and artefacts, strike me as beautiful and give me pleasure.

For years I held back on getting a Leica. The Leica M3 type is very expensive, even used and decades old, because they are still useful. And a Leica lens is very expensive if it's in decent condition.

But finally I wanted one, and I cheated a little bit; I didn't buy an M3, I bought an earlier model, a IIIc, which is a bit more complex, and which I don't think many use for real photography (though I think you could).
[Update: thanks to Jim S: This is actually a IIIc, a much older model than I though, it's from the forties! Quality keeps. Also by the way, wiki says it was die-cast.]
And instead of a Leica lens, I found a Leica-compatible Canon lens, which I find very beautiful.

Update: Bert says:
Nowadays we take curved surfaces and other organic shapes for granted in product design, thanks to computer-assisted design and fabrication (CAD, CAM & CNC* machines). But when you consider that those cameras were made long before this age of computers, then the intricate contouring of the top plate takes a whole different value.

I have no direct experience with the machines used at the time. But to admit that I have no idea of how some of the features of that part were created still says a lot. I certainly would love to see the equipments used to make those, some must have rivaled in complexity with clockwork.


It is beautiful work, for sure. A product of days when manual labor was cheap and long hours were the norm.

Update:
Wow, we struck it rich here. I wrote to just two people I thought might help, and it turns out our friend Kelly (remember the propeller?) knows a LOT about it! Take it, Kelly:

Kelly:
(I am sending this as a return email instead of commenting on the post directly because I included a couple of photos that I couldn't get to show up as a comment.)

I collect old cameras too, so I got mine out to take a closer look, and actually, I can answer this.

Back in the day, before CAD/CAM, they were able to make extremely complicated machined parts, particularly with aluminum, that were as good as the ones made with CAM setups today.  What the CAD and CAM combinations make possible now is the combination of much of the machinist's magic into the design process and the automation of a lot of what required a skilled machinist.  It still takes a skilled machinist to set up the CAM to make a particular part, but once it is set up, the CAM can then make dozens or thousands of parts without the skilled machinist.  So it is very possible that this part could have been machined.

Normally, an intricate machined part such as the top part of the Leica is normally machined from a casting and not from a billet.  Normally the starting point is what was called a 'sand casting' in which a 'pattern' [a model] was made usually out of wood and sometimes coated with resin, epoxy or simply paint and then set on a flat surface and then covered in a container with what amounted to wet fine sand which was then compressed, often with wood mallets.  The wood pattern was then removed from the sand, leaving a cavity in the wet sand the shape of the pattern.  They then poured molten metal into the sand and when it cooled, they would wash off all of the sand and have a metal part which was very close to the final part.  That casting would then be further machined for screw threads, sizing, polishing, etc.  You then use the same wood pattern to make the next sand mold for the next casting, and you could usually make a few thousand parts before the pattern was worn or damaged.

However, that is not what I think they did here.  I think what they used to make this part was a 'die casting' instead of a sand casting.  A die is machined from a billet of something able to withstand temperatures and abrasion, such as certain types of stainless steel.  Aluminum is poured into the die and then the cooled part is extracted, usually by a special machine.  This casting is then machined to make the final part.

The advantage of the die casting process is that you skip having to make a sand mold for each part, you simply pour in metal, pull out the part, pour in metal, pull out the part, etc, and you can make the castings relatively quickly with one die.  The other advantage is that you can make very very fine castings that many people think are machined.

The reason I think this is a die casting is because of the lettering.  To put lettering on a sand casting, they would usually glue on pre-made letters onto the wood pattern or use a steel or wood stamp to press letters into the sand mold after removing the pattern, producing raised letters in the finished part.  In a die casting, the letters are usually (not always) recessed because if the casting is damaged in the extraction, it is easier to clean metal chunks off of the raised lettering on the die than it was to try to dig metal pieces out of recessed lettering in the die.  Also, raised lettering was sometimes easier to machine onto the die.  I understand that sometimes really fine small lettering could be electroplated onto the die surface.

Anyway, the Leica part has recessed lettering, some fairly intricate such as the Leica logo, and the serial number, which I think was probably done with an insert into the metal die.  The die casting was probably then machined and polished.  The sides are not perfectly parallel, as they might be on a machined part, but have an almost imperceptible angle which probably facilitated extraction from the die.  The edges are rounded with some compound curves that actually would be very very difficult to machine in a production environment.  On mine, I can see where the corners have some odd rounding that is indicative of dressing and polishing of a casting and not machining.  It was probably a fairly expensive part at the time, being a fairly complicated casting, but the technology was probably on par with companies making carburettors for cars or the housing for aircraft instruments, examples of which I am sure you can think of.  Remember that when new, this Leica probably cost as much as a decent used car, so they could afford a few expensive parts, but I don't think they had to do much to this part, probably tapped a few screw holes, polished the edges and the top, milled the bottom part to mate with the other parts, and probably rubbed paint or ink into the recessed lettering.

The newest technology is to use CNC machines to manufacture the die out of graphite instead of steel.  The die is good for only a few hundred castings, but my friend Wayne with the machine shop says that when they make them, the graphite cuts like butter and once you have the programming done for the CNC machine, they can make a graphite die very inexpensively in a few minutes.   His customers are telling him that the resulting casting looks as good or better than a machined part, usually better than the parts coming out of a steel die, but the part cools so fast in the graphite mold that they get a lot of casting imperfections.  The trick seems to be to heat the graphite die up towards a thousand degrees before pouring the part, but they haven't got the technology completely figured out yet, but they have been making aluminum cast parts in steel die molds for sixty or seventy years.

Anyway, that's my take on it.  I have included a couple of photos of my Leica.  Mine has the Leica 1.5 lens which is probably a 'bigger and deeper eye' than your Canon lens.  Mine also seems to have a built in light meter and a couple of other frills.  I used to try to take photos with it, but it jammed a few years ago and I haven't tried to fix it yet.  In the photo is an early model HP-12c calculator with a die cast case and a modern SigSauer which are examples of intricate die castings that can be mistaken for machined parts.

Grove's wooden watch is not like Washington's wooden teeth

If I wore a watch much, I think I'd get this one. I have a profound weakness for quality design and quality materials, especially natural ones well used. 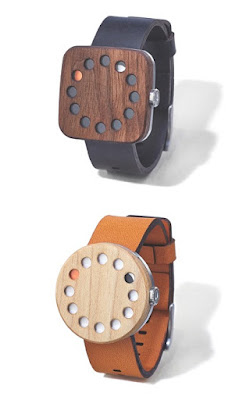 Grove makes many unusual and sexy things out of wood.

I'm also hooked on their case. It comes in sizes for iPad Mini, iPad Air, and the new thin Macbook. (Though surely many other brand's products will fit in one of them.) This may be the most stylish case I've seen so far.
Update: I got it myself now, and I've gotta say I'm slightly disappointed. Naîvely I thought it would be this mavellous hardwood construction made possible only by modern lasercutting technology, but instead it feels more like felt covered with wood veneer. I expected it to sound like wood when you knocked on it, but it's too soft for that.  It is possible it's the only way it could be done within a certain price/weight limit, but still, sigh.