What makes this full-frame* camera (and its predecessors) interesting is that it gives pros and advanced amateurs more picture quality and more camera than almost anybody needs, and does it in a non-back-breaking package and at a (relatively) non-bank-breaking price, compared to the flagship models.

I am pleased that Canon seems to have broken their heavy megapixel addiction, and kept this model at the same fully sufficient MP count of 22, so that the low-light capabilities could be built up instead. Based on trends and numbers, I am sure these are second to none in this camera, or close enough for anybody.
Canon says this model generally has a two-stop advantage in image quality over the Mark II model, which was no slouch. ISO 3200 looks like ISO800 used to! Dang. We've seen such before, but it's still amazing. With film or with lenses, a two-stop difference in sensitivity is followed by major downsides in quality (film) or weight/size/price (lenses). This two-stop advantage though, apart from a three-year wait, is essentially free and downside-free.

Imaging-Resource has a few interesting videos (well down on this page) of Canon's Chuck Westfall showing some of the many new features of the camera, for example this nice Quiet Mode:


... An interesting aspect is that sensors have now gotten so good that many are beginning to doubt who really needs a full-frame camera these days. In the early days, observers like Mike Reichman said that he considered smaller sensors (APS-C) a temporary format which would go away when full-frame sensor became affordable. But they have not become a lot more affordable for the last couple of years, and instead we are now seeing exchangable-lens cameras with really small sensors, like the Pentax Q and the Nikon 1, both of which have sensors much smaller than the M4/3 format, which is smaller than APS-C, which is smaller than full-frame. And we see a camera like the Fujifilm X10 which also has such a smallish sensor (smaller than M4/3, but bigger than that in pocket-cameras), yet is nearly a pocket-camera, and yet takes good quality images at ISO 3200, something which could only be approached by full-frame cameras just 4-5 years ago.


*Full-frame means that the sensor is large, the same size as traditional 35mm negatives, 24mm x 36mm, which is true of only a few and expensive cameras. The bigger the sensor, everything else being equal, the better quality, dynamic range, and sensitivity. (It also means that lenses need to be much bigger and expensive, though, especially if you want to really take advantage of the sharpness of modern digital imaging, which is higher than film.)
Posted by Eolake Stobblehouse at Saturday, March 03, 2012 2 comments:

I'm just enjoying another dosage of Squidbillies.
I like the hat. 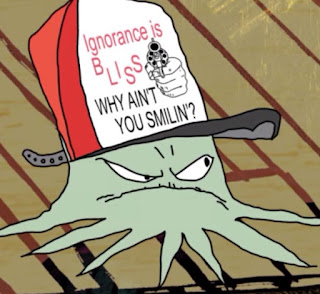 Squidbillies is so completely amoral, nay immoral, that, er, that... I dunno.
Posted by Eolake Stobblehouse at Friday, March 02, 2012 No comments:

Hah, this is funny. I doubt even the ads for slave traders in the olden days used the word "exploit"... 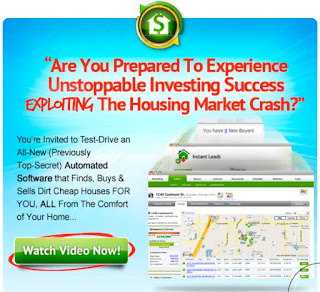 Update: Ars Technica examines the Nokia 808 phone. There are some interesting data there.
Posted by Eolake Stobblehouse at Friday, March 02, 2012 2 comments:

Here's a fresh attempt at bringing back long-form in-depth journalism, Matter.
MATTER will focus on doing one thing, and doing it exceptionally well. Every week, we will publish a single piece of top-tier long-form journalism about big issues in technology and science. That means no cheap reviews, no snarky opinion pieces, no top ten lists. Just one unmissable story.

Judging by the funding pouring into their Kickstarter project, there is interest for such a thing.
They'll aim at 99 cents per long-form article. I can see that working, if the stories are compelling and unique.

If the articles are over 15-20,000 words, I might call them "ebooks" and sell them for two or three bucks each (perhaps include some photos and video in them), and a new scheduled every week. Not only will the word "ebooks" give an impression of better value, it will even be more true if my impression of what they want to do is right. They want to do long pieces of writing which stand on their own instead of being sold in bundles, and which will have at least semi-lasting value and perhaps more, unlike most articles which are quite temporary. So "books" may not be over-selling it, as long, of course, as they are upfront about the actual length of the things.
They'll just need a good mechanism of subscription to them.
Posted by Eolake Stobblehouse at Thursday, March 01, 2012 No comments: 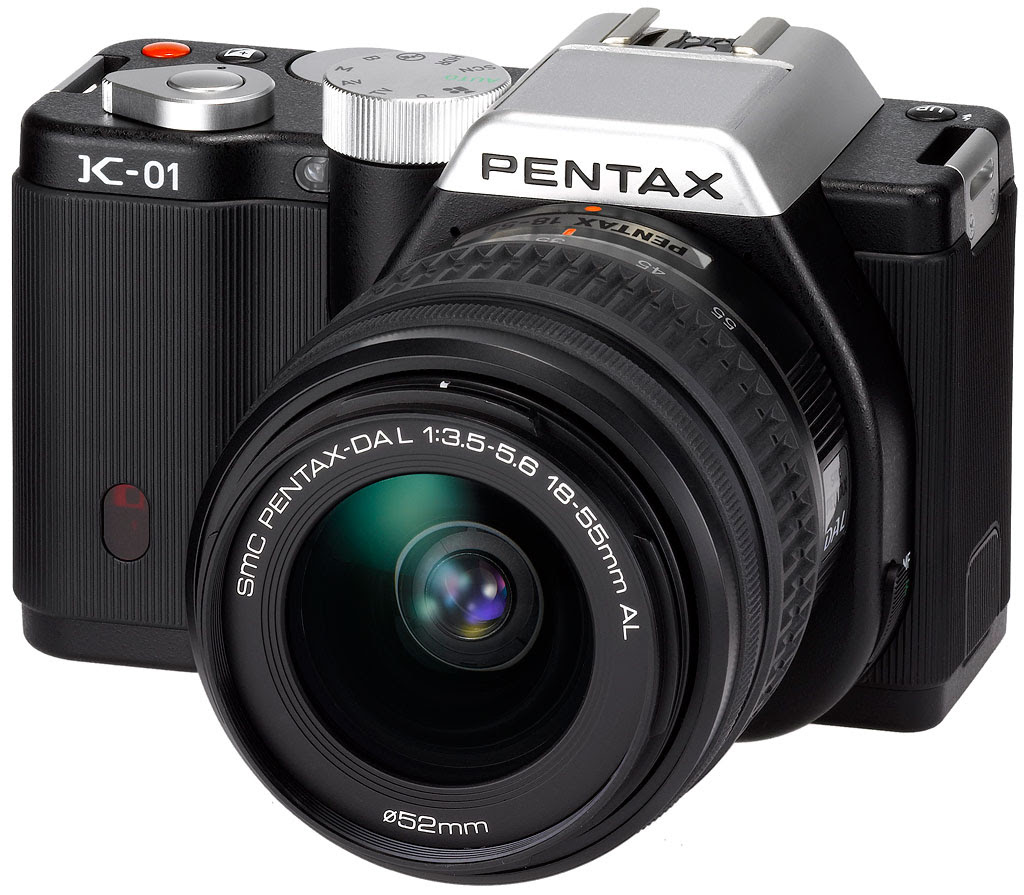 This will surely limit how compact Pentax can make new lenses though, as they haven't shortened the lens-to-sensor distance like everybody else who took out the mirror. We'll see how this goes in practice.
Of course, the camera also is as thick and heavy as the DSLR predecessors, unlike other mirror-free cameras (Micro Four Thirds for example). So apart from eliminating some moving parts and a little noise and vibration, I wonder what is really supposed to be the advantage of this model over Pentax's DSLR models, like the excellent K-r and K-5.
The K-01 also does not have an electronic viewfinder, only the screen on the back.
Posted by Eolake Stobblehouse at Thursday, March 01, 2012 3 comments:

Remember that camera, where you can focus in the pictures after the fact? Here's a nice and clear video and text review of it. The quality is not so hot yet, but it could be the beginning of something interesting. 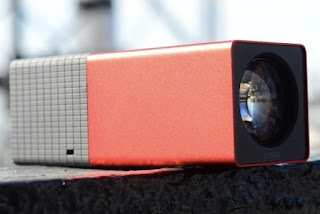 Here is a longer NYT article about Lytro.
Posted by Eolake Stobblehouse at Thursday, March 01, 2012 No comments: 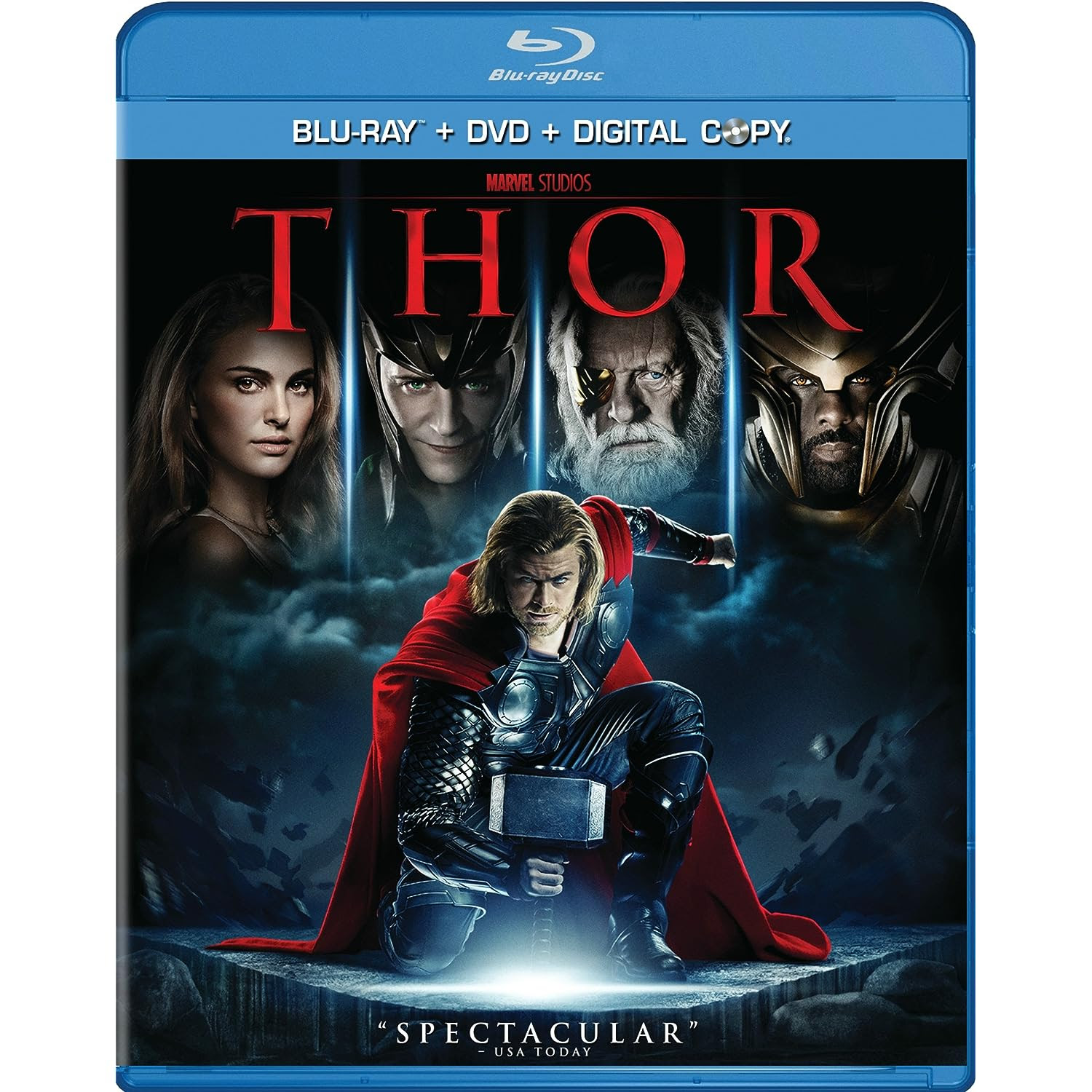 BTW, from the Avengers trailer (one of many, we seem to drown in trailers these days): Tony Stark says: "If we can't protect the Earth, we'll make damn sure we'll avenge it.".
I'm sure that'd be a great solace to five billion dead earthlings. And I'm sure the force which did such a thing will be quaking mightily in their boots when a half-dozen humans with slightly boosted strength and agility cry "Avengers Assemble" and attack their swarming space armada.
Posted by Eolake Stobblehouse at Wednesday, February 29, 2012 13 comments:

Cate on the cover, article.
Publishers want a recognisable person on the cover, with a real career; but they also want an empty vessel—for clothes and jewellery and make-up, which often seem to be supplied by the advertisers with the most muscle. 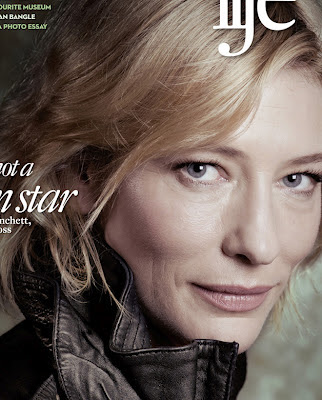 Beware the Morphing Flashback Malware, article.
Finally time to get virus protection for a Mac? I did, I got the Intego one mentioned in the article.
Posted by Eolake Stobblehouse at Tuesday, February 28, 2012 3 comments:

[Thanks to Timo]
Geez Loueeeze, this is getting ridic.


Ten years ago, I said: "I think that in ten years, we can get a pocket camera with large-format resolution" (large format is 4x5-inch negative or larger). But I didn't think it would happen in a phone first.

For the record I'm sure this thing can't compete with the new Nikon D800 36MP camera. There are many different sizes and qualities of megapixels. But still this seems pretty remarkable, and apparently it does have a Zeiss lens. The time can't be far off when camera-shake is a thing of the past, in any light. Low-light grain too. And small sensor cameras like this have practically infinite depth of field, so that handles focus errors also.

Update:
See links in the comments, like these pictures. The shallow depth of field in the first one indicates that this phone must have a much larger sensor than we're used to in phones.
Full resolution sample images. OK, this has the iPhone camera beat all to heck. Didn't see that coming so soon. 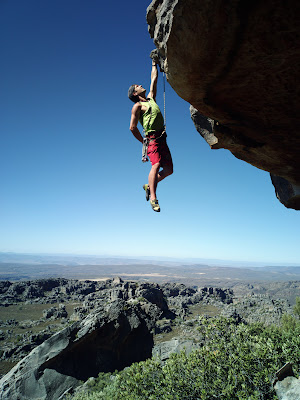 Update: Andrea sends this link to a hands-on article.
Sadly, the phone runs the Symbian OS, which is on its way out. But surely the camera will be used in more modern phones soon.
Posted by Eolake Stobblehouse at Monday, February 27, 2012 20 comments:

Zooey Deschanel, or who? 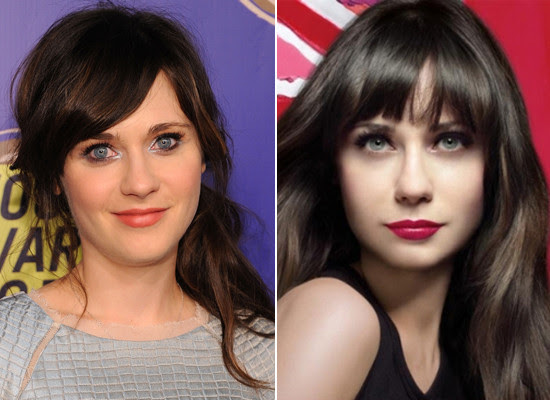 Changes made to Zooey include:
Colorizing - both tinting her eyes aqua green to provide the correct contrast with the fushia make-up (her actual eye color is pretty grey-blue), and airbrushing all of her skin to a solid matte cool tone (her natural skin color is more peachy)
A nose job - her nose was both narrowed and bobbed by editing shading on the underside
Chin job and neck job - her chin line was made more square than it is naturally, and her neck was thinned, this was accomplished by darkening "shadows" vertically down her cheeks and neck, and then drawing in the chin they wanted her to have.

It's a bit weird when people become unrecognizable in an ad or mag photo shoot. Like any eccentricity is upsetting, or their personality had nothing to do with their success.