Famous article about Frank Sinatra, from 1966.

It's interesting how a very young Harlan Ellison figures in the article. If anybody could match Sinatra in the ferocious-ego department, it would be Ellison.

Quote:
"It was reported then that the paparazzi had made Sinatra a collective offer of $16,000 if he would pose with Ava Gardner; Sinatra was said to have made a counter offer of $32,000 if he could break one paparazzi arm and leg."

Now that's funny! I can understand him.

Though it must be said I don't get the appeal of his music. And I have a hard time respecting a man, no matter how successful and well dressed, who is so much into fighting, on so many levels.
Posted by Eolake Stobblehouse at Saturday, October 13, 2007 5 comments:

This is interesting.
But I think it will be awfully victimized by weather, no? Not only does it not fly above the weather like jets do, but it is also bigger and slower.

Aeros' page on the craft.
Posted by Eolake Stobblehouse at Saturday, October 13, 2007 6 comments:

Bunnies invade NYC.
And they play that nice song that Apple used to promote the multi-color iMac back in the late nineties. I like it. It's by a band named Stones, I think.

Here's a funny thing: some commentators say things like: "It was nice, would've been better without the people jumping all over the place making it LOOK like stop motion. Just because it is, doesn't mean it has to look like it." But that's the great thing: by making the people jerk around, it's made to look like it's claymation, but it's not, it's digital! It's seen in many aspects, like the huge objects, which can't be real clay. It's only a fun ad because it looks like claymation, but can't be.

Update: Eric points out this inspiration.

This is why I have stopped listening to diet experts.
Posted by Eolake Stobblehouse at Friday, October 12, 2007 5 comments: 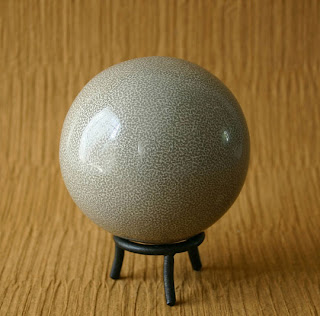 Hikaru dorodango. Made by hand.

There seem to be different methods. The link above says the ball is polished by cloth near the end. This page says the shine is not accomplished by polishing.

We made something similar in school. An egg made of clay, and polished with a spoon, I think before it was dry. It could get very slick and shiny.
Posted by Eolake Stobblehouse at Friday, October 12, 2007 2 comments:

Pavarotti is in the Google logo today.

Gee, that's a pretty prominent position for an individual to be in, isn't it?

Secondly, I thought: Oh, is he dead? And it turns out he is, since last month. So I'm thinking: isn't it funny how we celebrate people a lot more when they're dead? Isn't that a bit backwards?
Posted by Eolake Stobblehouse at Friday, October 12, 2007 19 comments:

Article about quiet PCs.
It took a long time for the market to start to demand quiet PCs for real. Maybe in a noisy office a noisy PC is no big deal, but working from home, it makes a huge difference to me at least.

My previous computer, the Apple G5 tower model, had a very hot chip. So it had big parts of the space devoted to cooling in innovative ways, designed to reduce noise while cooling a lot. And yet it was not so quiet. I had put it inside a closet next to my desk, and yet when it became hot after some intense use, it became more noisy than I liked, and I turned it off for a while.

The present one, the Mac Pro, same design on the outside, has an Intel chip. And it was clearly a wise choice to change to that. Around the millennium, the former PowerPC chip was supposed to be destined for much better things in the power/heat area, but since then Intel overtook them by leaps and bounds. So the new computers are a bit faster, and a lot quieter. Even while having reclaimed much of the space that was used for cooling before, to make for more expansion options.

In fact this big powerhouse is almost as quiet as a laptop. I have installed it in the closet like the last one, and the ambient small noises of the building and the neighborhood are actually more noticeable than the noise from the machine. I love it. It does wonders for my stress levels.
Posted by Eolake Stobblehouse at Thursday, October 11, 2007 6 comments:

How can you make titles for art anyway? It always messes it up. If it's not relevant, it's not helpful. If it is relevant, it's often too restrictive, and does not allow people to make their own interpretation, which is essential to good art.

Last year I was in a photo club for a few months. One of the reasons I stopped was that a judge in a contest didn't like the picture below... because of the title! I had called it Union Jack. And he said that a title must be a "users manual" to a picture. He said the title has to tell the viewer what the picture is about. Which is just so much nonsense. If there is a short way of telling people what a work of art is about, why make it in the first place?

Of course such a petty reason was not the main reason I stopped going to the club. I was just bored. There was no debate about this title thing, just as there was no debate about anything. People did not talk about pictures. Back when I was a teenager in Denmark, I was extremely fortunate to belong to one of the best photo clubs in that country, Næstved Photo Club. It had interesting pictures, and it had interesting debates. I learned tons. 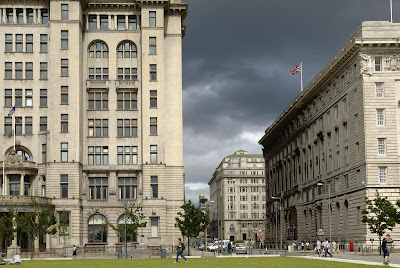 I just received my Aviator keyboard.
It's quite possible to touch-type on it, though the modifier keys are obviously smaller and different shapes, and there are bigger spaces between them, so it will take a little getting used to. But not all that much, I think, and it feels solid. 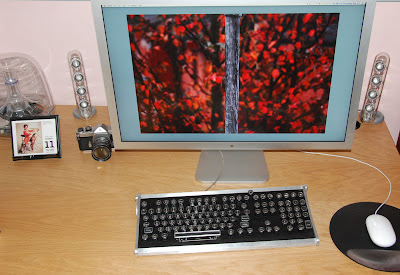 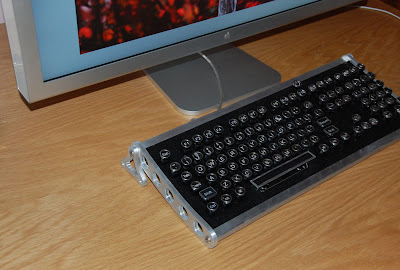 Audrey and her car

Here is Audrey Hepburn again, in How To Steal A Million. What a gorgeous and unusual spectacle she presents. Excellent costuming.

Not to mention that car. I just love it.
Anybody know what it is? 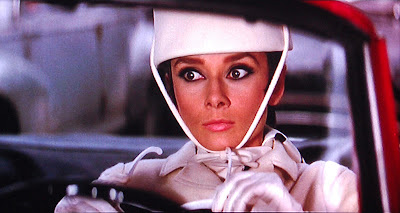 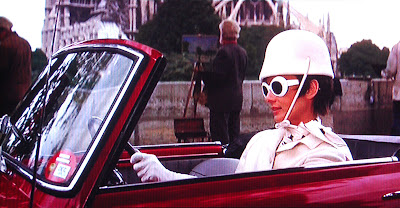 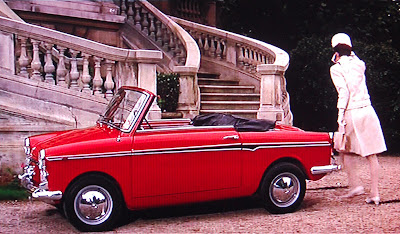 alex said...
Autobianchi
Apparently they were, in the mid 60's , a FIAT division. So it was an Italian car.
I found the answer on the IMDb page for the film, someone else had asked the question.

Where do you see that? I don't see it.
There's also the car below. It's claimed in the film it will run 150MPH. Its road grip is awful, but it's certainly pretty.
... Ah, found something... it's a Jaguar XK-E, apparently. 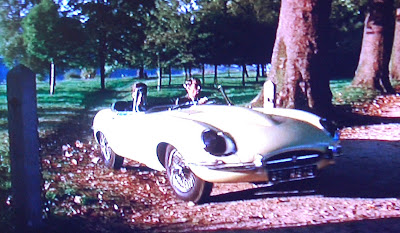 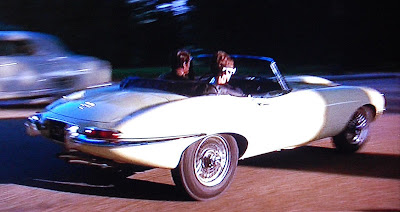 One thing, admittedly, irritates me about it: it is all filmed with wide angle in wide shots, and with only available light, mostly in small apartments. Which means that 90% of the time you only have the foggiest notion of what the characters actually look like. I'm not kidding.

But on the other hand it's brilliantly written and acted. It's actually unlike any other comedy I've seen. And very funny indeed, I often laughed out loud, very loud.
Posted by Eolake Stobblehouse at Wednesday, October 10, 2007 No comments:

My friend Steve Roberts, the "TechNomad". He is a pioneer in equipping small boats with customized high tech gear.

"My intent, in a nutshell, is to conjure a self-sufficient nautical escape pod that has the capability of supporting full-time global voyaging..."

Do also check out Steve's "Microship". 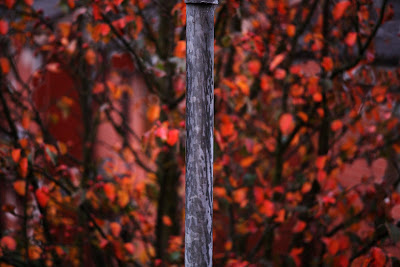 Once again I owe much to the high sensitivity and the image stabilization of modern digital cameras, the light was very low indeed, almost night.
I have emulated the darkness in the image with a little manipulation. The camera of course tends to make all pictures neutral no matter the light level.

Dayu said:
amazing to think one has the technology today to capture a visual of a streamlet (a droplet streaming?) of rain falling...

eolake said...
Interestingly, though, I only saw the drops on the lamp post after the fact. It was getting dark very rapidly, so I was working very fast, and I was really photographing the tree with the red house behind it. (The dusk light was very red at the point.) It was only the last images I took that I thought to focus on the post instead of the tree, and I finally judged that to be the superior image.
Below is an earlier version. You'll see that in the top image I zoomed in closer also. And I dampened some of the brigher parts of the background in the computer. 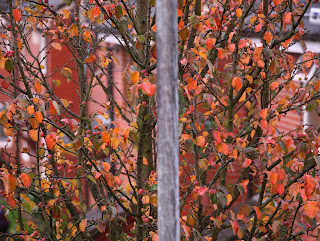 I don't think I would have gotten to the final version at all if I'd been shooting film. Even if I could have gotten myself to use that much film that rapidly, it is still a matter of running out of film every 36 pictures, and then having to get it developed and scanned.
Posted by Eolake Stobblehouse at Tuesday, October 09, 2007 8 comments: 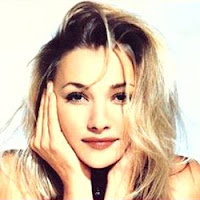 Another Danish artist: Whigfield.
She was the first non-UK artist ever to place at number 1 on UK music charts.

It's a funny thing: like a contemporary song, Barbie Girl, Saturday Night is as "plastic pop" as music comes, but I still really like it (both of them). I have not listened to radio since I was a kid, but back in 1994 (good grief how time flies) a store was playing Saturday Night as I passed, and it grabbed me immediately, and I still really like it.

It is one of life's great mysteries to me: what is it about one song (or painting or whatever) that makes it so different from other ones that it just grabs people? 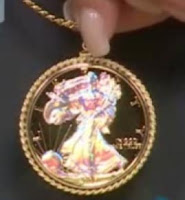 This must be the epitome of good taste: a coin pendant which has a hologram and is gold-plated!

My goodness, listen to the sales patter... the speed, the enthusiasm, the intensity... "...this is an heirloom..." I wonder, do these people really believe this stuff? Or are they that good at faking it? I am not sure which option is more amazing.
Posted by Eolake Stobblehouse at Monday, October 08, 2007 1 comment:

I don't often post nudes here, I have Domai for that. But I think this one is pretty much discreet enough to be all-audience, and I love the other pictorial aspects of it: the background, the hair, the light, and the wonderfully intense facial expression.
[Model: Marie-Anne, photo: Philippe Carly] 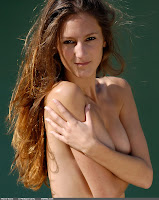 A photo of mine. A little "abstractized" by limiting the number of colors in the file.
Apart from that, the photo is like the subject was found. The sign was on the ground, and there was sand and water on it, and the candy wrapper. (The candy user clearly did not follow instructions.)
I'm quite fond of this one. 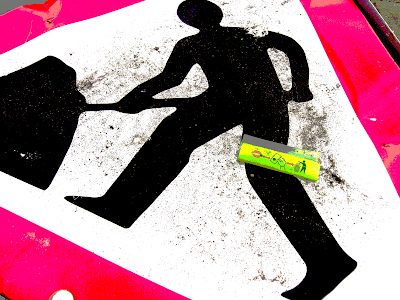 If you're curious, here is the original photo, with only a bit of contrast enhancement: 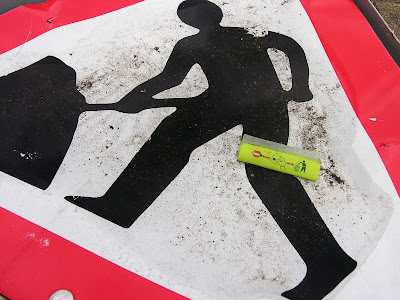 Tim Ferris on early giving.
"Charity doesn’t work — empowerment does. The good news is that the latter depends on acting early and precisely, not lots of money."

I'm reminded of the remarkable book The Soul Of Money.
Posted by Eolake Stobblehouse at Sunday, October 07, 2007 No comments: