Lost Girls hit stores on Wed Aug 31st, and the entire 10,000 copy 1st printing sold out on that day.
The publisher is printing more as quick as they can, obviously.
They have also set up a links page to articles and interviews related to the book.

I got my signed and numbered edition last week, and it really is a very remarkable work.

From an Amazon review:
"Just about the oddest preconceived notion in literature is that sex--generally a positive experience in real life--is widely considered dirty, low brow, and smutty (to list very few adjectives), whereas violence--generally a negative experience in real life--is considered exciting, entertaining, and, in some form or another, a remarkably suitable metaphor for the human condition." -- Downey

I think Downey is being diplomatic here, because this is even more true of real life than of literature. At least half of the world's population clearly feels this way. It is very remarkable.
Posted by Eolake Stobblehouse at Saturday, September 16, 2006 3 comments:

The Mac word processor for people who like to write instead of formatting office documents: Nisus Writer Express.
This app is nible and has good usability. If you are a writer, using Microsoft Word is like doing surgery with a broad sword.
Posted by Eolake Stobblehouse at Saturday, September 16, 2006 6 comments:

For advanced amateur photographers, now Leica has finally made a professional digital camera with exchangeable lenses. Is is worth the wait? Well, Reid's reviews has tested it.
The site is a subscription site, but it is worth it in my opinion.
Posted by Eolake Stobblehouse at Friday, September 15, 2006 3 comments:

I am watching the live action Peter Pan movie from 2003.
Several thoughts:

2: SquareBob Spongepants (or whatever) is not a gay symbol, but Peter Pan is.

3: Peter Pan is an arrogant a-hole (like the "Little Prince"), so why is everybody in love with him?

4: Same with Tinkerbell. Nasty piece of work she is. She tries to kill Wendy just out of jealousy.

5: Why do people romanticize pirates? You don't romanticize the guy who robs a convenience store and shoots the clerk, so why pirates?

6: More significantly, why do people romanticize childhood? Do people really miss being small and weak, having no power under the law, and being treated like property?

Update:
Anonymous said...
Oy, no offense man, but reading your blog can be exhausting at times. Do you always have to over-analyze everything?

People romanticize pirates because they talk funny and have a good fashion sense. Plus, they're always hunting for booty, and that's always a good thing, right? Argh!

And aside from the whole world being this new, exciting, mysterious place, childhood was a time when you could get away with pretending to be a superhero all day. Also, people would give you candy at the bank or the doctor's office. Not to mention Street Fighter, He Man, Ninja Turtles, X Men

eolake answered:
Well, that's another viewpoint, and I am sure a happier one.
As to which one is truer, who can tell.
Posted by Eolake Stobblehouse at Friday, September 15, 2006 12 comments:

Eolake wrote:
"Even if it was true that there is one winner and 6 billion losers..."

By Pascal:
The Alpha male -or couple- is only a relevant notion in a wolf pack, and it certainly doesn't mean that the other wolves -or their number!- have no importance. A lonely Alpha male/couple is a pointless notion, they only exist as such because of the others. Just like any leaders, chiefs, and champions.

In my grandmother's house, she's the prettiest, sexiest, cutest and youngest woman around, as I often tell her. (I know, I really SHOULD get a life!!!) And, as she often tells me : "Of course. I'm the only one here." So much for my irresistible finesse...

Not to state that the life of a non-queen ant seems tempting to me, but... in their community, apart from the preciousness of the breeding one, there are no distinctions. They all treat each other as equals. In spite of their innate differences, soldiers will work when there's work to be done, and workers will fight when there's a war. No slacking military nomenklatura there.

By becoming the species with the most extreme abtract thinking, sometimes we have developed some concepts, like hierarchy, to the point of the absurd. And the male babirussa (horned dog) with the biggest, most impressively virile tusks, is to be pitied, because these curved, ever growing things will eventually pierce its forhead and brain, and kill it horribly. But until then, the females will find these same tusks most irresistible. Poor monster. :-/

Being at the top is not always enviable : you can only change negatively, and there's nowhere left to go but downhill. (Even if you head right.) Pro athletes wear out their body prematurely by pushing it to its limits, when these limits are there to help us survive in exceptional circumstances. Like illness and accidents. Sometimes, they will snap a ligament, when these things are way sturdier than steel cables! Ouchie... They sometimes even die in their exceptional (and very impressive) efforts. Being physically fit is always a plus, but trust me, it's great to be an ordinary bloke.

Do you know that steroids, while indeed efficient to build bigger muscles, not only have toxic effects and bring about heart hazard, but they make your testes smaller? You have the word of a professional M.D. : DON'T use testosterone injections to impress the ladies, you'll regret it at the worst possible moment.

Mindwise, true geniuses are nearly always alienated, too different to adapt socially, and may border madness... when they're lucky! Look at Einstein's private life : a disaster. The world's most unique soprano ever, Mado Robin, had vocal cords the likes of which had never been seen before. Guinness record for highest pitch AND most octaves. But her daughter was born mute. Too much of a good thing...

My conclusion : excellence can and must be an inspiration. But an interesting direction for those who like traveling, not a universal goal. If we all try to climb to the top, the inverted pyramid will topple. And what's "the top", anyway? Elvis, "the King", became bulimic, obese, and died younger than I am, from an overdose. Billionaires have to build themselves luxury prisons because being rich makes you a target. Most show-biz celebrities are unhappy, can't keep up a marriage, and are hounded by paparazzi. Ladi Di has finally found peace. :-(

Insects are, by instinct, drawn to light. Because during the day, where there is light there is a way to fly through. But at night, the hypnotizing light of a lamp will only lead them to their demise. "Number One" is a deadly illusion.

I really don't dream on being God... Oh, Bruce Almighty, grant me the Wisdom! ;-P 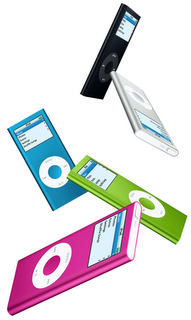 One must say about Apple: they don't rest on their laurels!
It is hardly like the iPod Nano is outdated, and yet here is a completely revamped model.

My only objection: what's with the poisonous colors?
Most of the time I love Apple's designs, but sometimes a detail will completely miss, like these colors or the iMac "Dalmatian" and iMac "FlowerPower". Ugh. (Both of those machines came out around six years ago, and are mercifully mostly forgotten now.)
Posted by Eolake Stobblehouse at Friday, September 15, 2006 No comments:

I spoke to someone this morning who had met an ex school buddy in town and he told me that it wasn't until he explained to his school buddy what he was into and what he was doing that it dawned on him just how far he had actually come.

"When you're right in it, every day," he said, "seems you lose perspective..."

That gave me the idea for today's 60 second exercise.

Imagine you are meeting with someone who hasn't seen you for ten years or so, and you have 60 seconds to tell them what's been happening since then and what you're doing right now.

Just to make sure that YOU also know just how far YOU have already come... :-)

I think this is a highly interesting machine for either advanced home users, or even professionals who don't work with big images or video: the new 24-inch iMac.
TidBITS article. Apple page.

By the way, here is a tip to Mac users who are bloggers:
Safari does not support the full features of making posts. Mozilla or Firefox are much better for posting images and seeing what you do WYSIWIG.

Another tip:
I have just started using an app for blogging offline, specifically Ecto (Mac and Windows both). I think I'll get very used to it very fast. Easier formatting, and I can save all the time as I'm writing, like I'm used to.
Posted by Eolake Stobblehouse at Tuesday, September 12, 2006 No comments:

My friends think that I personally am a big factor in keeping Amazon (.com and UK) in the black. I don't blame them. In the past four years I've added new book cases three times. Big book cases, floor to ceiling.
But I've just found out that for most books, AbeBooks (.com or UK) is far cheaper than Amazon. And this is not just for used books. Many new books are like 30% cheaper than at Amazon! And I have heard that when shipping used books they are usually faster than Amazon because they ship from the sub-contractor directly.
They do have two drawbacks: no one-click buying, and no book reviews. But the latter you can always find on many other sites, and I don't think one-click justifies that huge price increase.
Posted by Eolake Stobblehouse at Sunday, September 10, 2006 2 comments:

I have long been irritated by the extremely high prices most publishers want for e-books and for audio books (downloadable). It's not right, and it is not even good business sense. So it is very refreshing to find a wonderful idea like Podiobooks.
Posted by Eolake Stobblehouse at Sunday, September 10, 2006 6 comments:

Get a free audio book.
Posted by Eolake Stobblehouse at Sunday, September 10, 2006 8 comments:

At a time when the president of the US brags in the State of the Union address that abstinence is on the rise, it is nice to know there are sites like Teen Wire to give young people much needed information and reassurance.

Update: featured comments:
Pascal R said...
I browsed the site. For a doctor, some things are naturally very basic/obvious. But for an american teen, or any teen for that matter, I think it's an excellent site and give it my warm recommendation.

9:52 PM
eolake said...
As an educated man from a very liberal country, I still found tidbits that made me think. To the average teenager, the site must be a revelation.

This must be an EVIL site to the religious right. It shows explicit drawings of genetalia! If that doesn't make killers out of our kids, what will? (The military?)
Posted by Eolake Stobblehouse at Sunday, September 10, 2006 12 comments: