What progress comes from

All progress is based upon a universal innate desire on the part of every organism to live beyond its income.
- Samuel Butler
Posted by Eolake Stobblehouse at Saturday, September 10, 2011 2 comments:

How to Tow a Building-Sized Iceberg

How to Tow a Building-Sized Iceberg, article.


French engineer Georges Mougin has a big idea. He wants to go to Antarctica, tie a big rope around a six-million-ton iceberg, drag it back to Africa and melt it into fresh, drinkable water.


They don't talk about whether they'll try to cover it to reduce the melting. I'd have thought that would be an important question.

How about pumping seawater into a desert and let the sand filter out the salt, then pump up drinking water from below? Wonder if that could work. Would probably be a long line, and maybe the sand wouldn't get out all the salt. Perhaps too there'd be too big a loss of water over the process. And probably the energy expense would be huge, as well as the environmental impact.
This article says that salt is very hard to separate from water, so maybe sand simply wouldn't do the trick. Well, I was just spitballing.

Trying googling for this, I found this small-scale, but smart method.
Posted by Eolake Stobblehouse at Friday, September 09, 2011 3 comments:

Saturn seen from the dark side

[Thanks to TCGirl]
Hard to believe this is an actual photo, but that's what they say.

[Thanks to Lou]
Don't miss this one, it's surprisingly beautiful.
Posted by Eolake Stobblehouse at Friday, September 09, 2011 2 comments:

Alizee flaunting what she's got

[Thanks to Dave]
It's interesting to see the stiff-faced older women (judges?) in the audience at Alizee's concert. They probably suspect that she's playing off her sexuality a leeeetle bit.
They may also suspect that all the men there would trample over their bodies like wildebeests to get at Alizee, and they don't like it a bit. It's a jungle out there.

She doesn't look at whole lot like Hermione now, eh?

I've come to the same conclusion as David Pogue. Recently I decided to revive my old classic address. I put it on hiatus and heavy spam filtering (SpamArrest) years ago. But I figured some of the spam had died away and spam sieve would deal with the rest. And it works pretty well. But one thing I did notice is that a lot of otherwise respectable companies have taken advantage of "found" addresses, and send me promotion. But these usually have an Unsubscribe button at the end of the email, and it works.

I also found out at some point that from what I could glean, many more addresses are distributed wrongfully from when you sign up with some company or site, compared to those picked off web sites by robots. So for years I've been using a special "throw-away" gmail address for signing up for newsletters and companies which demand it to sell me something, but who I didn't care *that* much for, so that if the spam ever gets too much on that address, I can dump it.

But by the way, Gmail is genius at filtering spam, I get almost nothing to gmail addresses. I've heard it's 'cuz they are web-based, they can check links in the mails and see if they lead to known or reported spam or virus sites.
Posted by Eolake Stobblehouse at Thursday, September 08, 2011 2 comments:

A lot of fresh money for the product-less registar business.

In the series of actresses I worship: Téa Leoni.
And this one is serious.

Watched her in Ghost Town. Lovely and funny film.
Finally a part which made me like Ricky Gervais better, instead of creeping me out.

(Again I wonder why it so often is so hard to find good photographs of people who are both beautiful and famous. They are either poor paparazzi shots or glamour shots which make the subject unrecognisable.)

I think part of Téa's appeal is that she feels like she's missing the defensive barrier that most people, especially beautiful people, have. The "don't come *too* close or I'll have to defend myself" barrier. It's very rare to have very little of that, and it's very pleasant for others. Based on primal fear, I guess.
Posted by Eolake Stobblehouse at Wednesday, September 07, 2011 4 comments:

[Thanks to tOP. There's another guy who has strong interest in many things.]

I admire people who have strong enough interest to have an impact in more than one area. Take Jay Leno, TV star, comedian, and car nut. Here he talks about an amazing Bugatti 37A racer. He actually drives it too, from around nine minutes into the video. Like Mike says in his post about roadsters, hardly anybody ever talks about driving these things.

We're many who enjoyed the find of Lenka's Trouble Is A Friend, so I looked for one more of hers, and I was not very surprised when I liked the first one I tried. She's fun.

Running to, not just away

Don't simply retire from something; have something to retire to.

I think those are wise words. A great number of people, especially men for some reason (I think women are better at socializing), just go to seed after retiring without any interests to go to. Many of them simply die after a couple of years.


Small Penis from Espen Hobbesland on Vimeo.
Lean back, turn up the volume and enjoy our graduation film, "Small Penis". Be sure to watch all the way to the end as we have a great set of bloopers:) It's the story of Daniel, a man who all of his life has felt insecure because of his penis size. This changes when he joins a support group a little bit out of the ordinary. The budget was about 4-500 dollars. Filmed in 5 days in Bergen, Norway. Shot on Sony XDcam, 1920x1080, 25p. Edited in Final Cut. In case you are wondering, the language they are speaking is Norwegian.
Posted by Eolake Stobblehouse at Tuesday, September 06, 2011 No comments:

Alexa played one of the kids in Spy Kids one to three. I guess she grew a lot in the couple of months between filming and this release party!
(Sorry, couldn't find a better quality video.)

I liked the movies by the way. Family flicks of course, and very unserious, but good fun and often very funny.
Posted by Eolake Stobblehouse at Tuesday, September 06, 2011 7 comments:

Pakistan bans VPNs, article.
The notice said that use of "all such mechanisms including EVPNs [encrypted virtual private networks] which conceal communication to the extent that prohibits monitoring" must be reported to authorities.
What is this, 1984? You need special permission to prevent authorities from spying on you? Woa, kids, can you say "totalitarian"?
Posted by Eolake Stobblehouse at Monday, September 05, 2011 1 comment:

I've gotten quite a bit of interest of the site of the symphonic concert below, Copenhagen Central Station.
For a building this central and this busy, it really is surprisingly pleasant.
It was opened in 1911, but considering the size and cost and time of building such a thing, it was probably designed in 1890, I'd hazard. 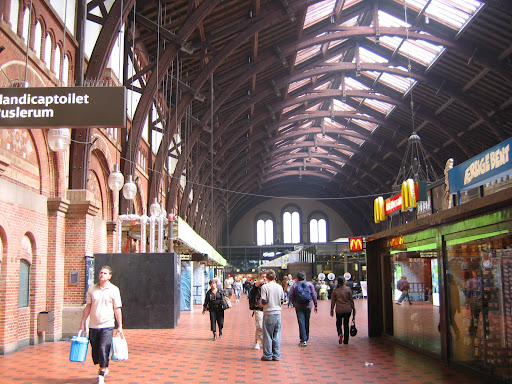 (The last pic only shows a third of the width if I recall correctly.)
I guess my liking for it could be related to it being present in several of the periods of my life where I felt I went through a lot of personal/spiritual expansion. I could imagine that if one knew it mainly for going through it when going to a job one hated, for instance, it might "taste" different.
Posted by Eolake Stobblehouse at Monday, September 05, 2011 No comments:

[Thanks to Basil]
Talk about don't judge a book by its cover. If I met this guy accidentally, I'm sure I'd like him, but I'd never guess he could play like that.

---
What a beaut, that middle judge. A bit over-made-up, though. It seems to be a trend in recent years, an unfortunate one in my view, to put so much paint on pop culture women that you can't see a square millimeter of their own colors.
Posted by Eolake Stobblehouse at Monday, September 05, 2011 6 comments:

Great vocal performance, and playing instruments in real time. Kewl.
I didn't see any info on who she is. But if she ever needs cover/promo photos, she can come to me anytime.