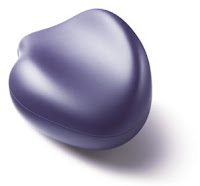 Excellent. I'm thinking this is a sign of the continuing softening of the global fear of sex.

And if they keep their nerve instead of being frightened off by any early protests that may happen, Philips will make a mint. The planned price for this little plastic thing is sixty pounds (and one for ninety)! Some similar merchandize by competitors is sold for a third of that. Not that I know anything about it, of course.

"Britain is key to a successful launch into a global market that could be worth more than £1 billion, says Justine Guest, the head of consumer life-style marketing for Philips UK. Britain was the guinea pig for two previous and somewhat controversial launches: the bikini trimmer and an all-over body shaver for men. Britain is more open than other markets tested by Philips researchers, including Germany, the US and the Netherlands and a popular TV series has paved the way. “Our research says that UK consumers are open to this story. Sex and the City changed the way people talk about it,” said Ms Guest."

Hell, what happened to the famously sexless and demure Brits? More open than Holland?! Gee.
Posted by Eolake Stobblehouse at Saturday, September 13, 2008

Hmmmm. Philips makes my Senseo coffeemaker. I wonder if I could do other things with it besides make coffee with pods???

Be very careful with your tender parts, that water is 90 degrees centigrade!!