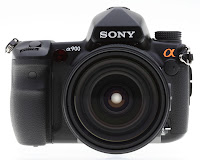 If you disregard the still-born Contax attempt early this decade, and the Kodak camera which was awful and short-lived, then Sony is only the third company to present a full frame camera, with the $3,000 A900. Will be interesting to see how it stacks up against the formidable competition of Nikon and Canon.
"The Sony DSLR-A900's full-frame imager is an Exmor CMOS type, with a whopping 24.6 megapixel resolution. Impressively, Sony has also incorporated its SteadyShot in-body image stabilization, making the Sony A900 the world's first full-frame DSLR to offer the capability."

Of course an issue is: does Sony have the lenses necessary to match a professional full frame camera? Even Canon and Nikon are struggling with this, and they have a head start.

I am guessing though that now we have two professional-rated full frame cameras under $3,000 (this one and Nikon D700), Canon may have to reconsider the $8,000 price for the 1Ds. Especially since the Sony has an even higher resolution than the Canon, which until now was unchallenged in this area. Seen from that viewpoint, the price of the Sony is a bargain.

Imaging-resource continues:
"First, the Sony A900's image quality is truly awe-inspiring. Opening a file in Photoshop and hitting Command + to get to 100% reminds me of that scene in Blade Runner when Deckard uses the Esper photoanalysis machine."

OK, I've decided I don't need such resolution for the time being, but this still sounds like fun.

Sadly it seems that high-ISO noise is not pretty, just like with the smaller Sony models. So it won't compete with the Nikon D3 for reportage!

Back in 2001, I bought the then-revolutionary Canon D30, which was 3 megapixels. That's one-eighth of the revolution of this camera, it had nowhere near the same features or speed, and it was the same price. Dang.

Below is a screenshot comparing the Sony with the D90, both at ISO 3200, and both after Noise Ninja has been applied. The Nikon picture is viewed at 140% because of the difference in resolution. The Nikon is actually less noisy! A tremendous accomplishment by Nikon. The Sony is clearly sharper, but remember this comes at the price of a much bigger and more expensive camera body and lens. (Thrice the price and twice the weight.) 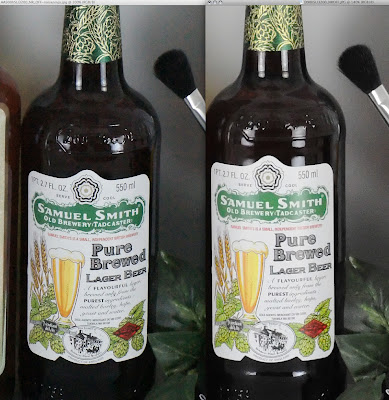 LumLand has a hands-on trial of the A900.
"The estimated price for this camera is AUD3999 for a body-only. Given that this is well under half that of the well regarded Canon 1DsM3, and that the images are very close in quality, then this has to be a great deal. You could buy the body and two top Zeiss lenses for much the same as the Canon.
As far as image quality is concerned, bear in mind that I had to look quite closely at the files – serious pixel-peeping really – to see the differences. I always figure that if I have to look this closely then the differences are probably so close as to be insignificant."
Posted by Eolake Stobblehouse at Tuesday, September 09, 2008

Time marches on - trampling everything underfoot.

Hehe. What a line.

Remind me never to show you pictures that I've taken. ;o)