[Updated] Windows Explorer in the nineties was good.

There's on thing I miss from when I used a Windoze machine in my day job in the nineties: Windows Explorer in Win95. It's still there, but I don't know how to make it give the view I found so very useful back then: it had two panes, each one showing a file system tree with flippy triangles, so you could easily oversee the entire file system on the left side, and also on the right side, and so you could move files from one side to the other. I think it's still the best file navigator I've tried, better than Apple's Finder (though the column view improved it).

This is shareware SpeedCommander, which approaches what I mean, even though it insists on separate panels for files, thus ending with four panels instead of two: 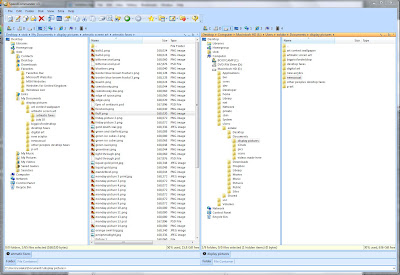 ----
One thing though: I think that OS X has much better text rendering and anti-aliasing than Windows 7. Text generally looks better and is more readable.
(Funny enough, years ago tech guru Nicholas Negroponte migrated from Mac to Windows partly because Mac back then didn't have text anti-aliasing!)

----
On the other hand, I think the Start Button menu in Windows is immensely useful for quickly finding and launching apps and so on. I wonder why Apple never made anything similar, there simple is no simple and easy single entrance point in OS S. It's pretty stupid, to be frank. Well, you can put icons for everything in the Dock, but cripes, does that take up space. And with many, it's equally confusing; there are no sub-menus.
Posted by Eolake Stobblehouse at Friday, July 02, 2010

Under the "organize" menu choose "layout" and from there select "navigation pane" That will get the folders tree into view on the left. This is from Win Vista, but Win 7 is very similar.

Yeah, but the brilliant part was having the folder tree on *both* sides. It's *so* useful for moving files, and nobody seems to remember it.

OK, you can achieve much of the same by just having two windows open, but that takes arranging every time, and is a much less elegant solution.

I found a shareware app called SpeedCommander which will do what I want here. It's not perfect though, for it insists on having a separate panel for the files instead of just showing them in the tree, so you end up with four panes instead of two.

Eolake, the double-pannel file explorer is not from Windows 95, but from Windows 3.1. Its name was File Manager, and was removed in Windows95 and later versions.

Hmmm, are you sure? I admit I did use 3.1 for a couple weeks before we migrated to Win95. And I also seem to recall getting the Explorer from the start button.

Here are some useful links:

The tree view can be set horizontal as shown here or vertical.

I'm amazed at how file handling is always messed up. One should think it's rather straightforward.

In a Mac book in the mid-nineties, there was a screenshot from the supposed upcoming system 8, named Copland. It was totally trashed, unfortunately, because the file handling system was, as the author said, "a model of clarity".

There is a Mac OS X Finder alternative called Pathfinder ... I have not used it, just read reviews, and I think it does what you want. As for finding apps quickly, I love Spotlight ... command-space type a couple of letters, hit return, and the application launches.

I also have a folder in my Dock which contains aliases to all the apps I use frequently ... click on it, it flys open in Grid view and I can mouseclick the desired app.

There are a number of third party system plugins that will implement drop down menus with lists of apps, and many people love app launchers like Launchbar, QuickSilver, and Butler, F10. (I've tried them all and always return to Spotlight or my Dock app folder method.)

I use your second method, except with aliases in a folder in FinderPop.

And I use 12 F-keys for all my most used apps. (My main browser has been F1 for 15 years, and my mail app has been F9 for almost as long!) (But you need extra software to do that.) (Oddly they had it briefly in OS9.)

The spotlight thing is a good tip, thanks. I never used it for much, I find it confusing, but I can see this is a good one.

Thanks, John, but it does not seem so. The "details" pane gives more data about a selected item, but it is not another file hierarchy tree.