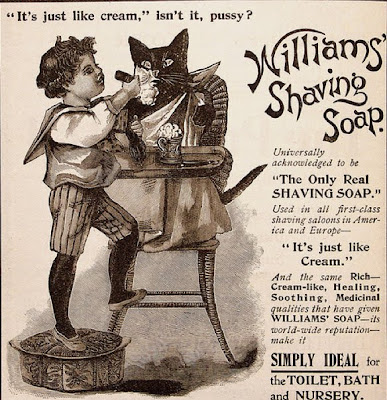 You forgot to show us the SECOND ad:
"Williams' Alun Powder", for even the deepest cuts, slashes and gashes.
They got the idea when the second photograph was taken at the exact split-second when the cat decided to REACT. (The negative's still classified to this day within the MI-5's black archives.)

I've got what has to be the world's nicest, kindest, sweetest, lovingest, most cooperative cat EVER, full-breed pedigree Ragdolls included. (I can give him a full bath or shower without using any sort of binding/coercion method, that's telling!)
But I'd have to be insane to attempt smearing his face in soap and then reaching for a razor. Then he'd turn into my PREVIOUS cat, which was the miniature reincarnation of a rabid black panther on illegal steroids! Two vets still bear the scars to prove it.

Did you know, that you can tame and train lions, or tigers, to perform circus acts, but NOT cats? Genuine, official fact! The feral willpower of our small feline companions is FAR more independant and indomitable.
My previous cat was as black in fur and temper as the one in this yon ad. (Watch closely: it's readying its lef paw claws, that tense twitch never lies.) Well, it took me three years of daily loving efforts to finally be allowed to stroke him gently without getting a death-promising growl warning in return. Daredevil massive neighborhood bullies twice his size flew repeatedly from his territorial claims! And you'd expect that Mommy's boy to be allowed to SHAVE one? HAH! For five months after that ad ATTEMPT, he was nicknamed "Mummy Boy". Because of the full-body bandages and lugubrious moans of pain! He'd've been better inspired to attempt giving a pepper enema to a cranky cougar.

(tsk!) There might me more than one way to skin a bear, but there's NO way at all to shave a fully able cat.

Cats only let us BELIEVE that we are the ones who have domesticated THEM. Because they don't care for praise, and know how fragile our human egoes are. They just indulge us big lugs because the free food is well worth it.

Shave a cat, they said? Not unless you found that kitty inside some rose-scented lace panties. :-D
(Mmm! Pussy cream...)