Microsoft Kills Kin, article.
(Rob Glaser commented: did they notify next of kin?)
Just six weeks after launch, Microsoft's Kin, the social phone we wanted to love, is dead. Microsoft is ending its short life, sources close to Microsoft tell us. [...]
The major reason? Sales. Microsoft never confirmed (or denied) that only 500 Kins were sold, but it's clear that the response has been completely underwhelming.

Wow. Only six weeks after launch!  It must suck to be in the group for one of those MS (or anywhere) products which fall totally flat on their face. If it was a good product, that must be a hard blow, and if it was a bad product, the whole long experience must surely have blown.

Wow again, get a load of Kin's site. (In safari but not in firefox I get a very "MTV" intro video)  It's worse (form over content) than any of the incarnations of David Bowie's site over the years. (His site, by the way, is not loading at all for me recently... what's up with that, is he dead or what? David seemed, personally, to be the one big artist who understood really early on how important the Net is.)

Funny sidebar: Gizmodo says that MS marketed the Kin to "hipsters". This is one of those words who have major definitions which are virtually antonyms: one is a person who is very Cool and In, and another is a person with "a particularly strong sense of alienation from most established social activities and relationships." Heh. I'd like to see how Microsoft would try to market to the latter!
(By the way, I, and most of my friends I suspect, fit way better in the second definition than in the first.)

Also by the by: is the wayback machine not working anymore? I mean not actively archiving?  There doesn't seem to be any newish results.

Here's a screen shot of Bowie's website.
The first time I tried to connect, it wouldn't load,
but a few minutes later, I got this. 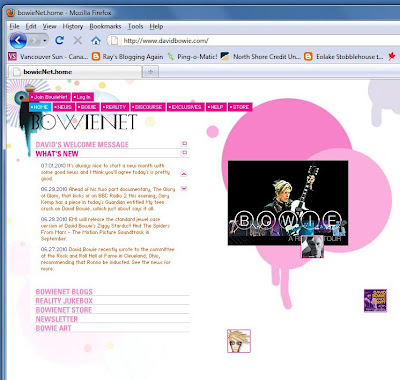 (In my opinion, that text is way too small to consider well legible. His site has always been like that.) (Of course too-small text is a *very* wide-spread issue on the web. Thank goodness most of it can be enlarged.)
Posted by Eolake Stobblehouse at Thursday, July 01, 2010

"Thank goodness most of it can be enlarged.

Me? Split hairs? Never! But is any of that on the screenshot of the David Bowie homepage actually "text"? It looks blank on my iPad, too.

Really? There's a BowieNet logo, and under it, pink text and goldenrod text.
(Also to very odd colors to choose for text.)