The iPhone is not a phone

I don't consider the iPhone a phone, I consider it a small tablet. In fact, from day one, I was wondering why Apple was calling it a phone, when phoning is clearly less than 15% of its capabilities even back then.
I guess it has to do with the popularity of telephoning, I never got that, I barely use it. But the general population surely do. In my town, the center does not have a single vidoe store, but it has six mobile phone stores next to each other!!

So anyway: for years I've been wondering: what did we do before the Internet?
Now I'm already starting to wonder: what did we do before tablets?
Example: I was talking to somebody about the speed of electric kettles.
I thought:  I'll bet anything there are several stop-watch applications for the iPhone. And what do you know, so there was. There was even a free one, which is excellent and very aesthetic.

So I could measure with ease how long it takes my electric kettle to boil two mugs of water. (1.42m.) 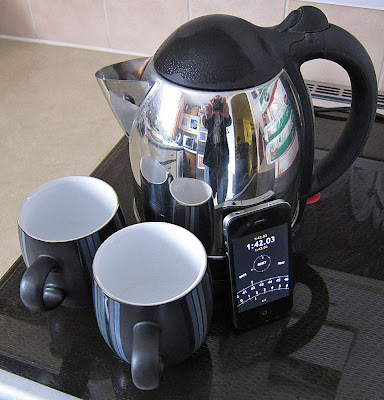 Obviously, the point is the bigger picture: this sort of thing will happen again and again and again, in so many areas we can't even imagine them.
(An example is an App which a friend showed me: if he hears a song, he holds his iPhone up and let it listen to it for a few seconds... and the app tells him which song it is, and where to get it!)
Posted by Eolake Stobblehouse at Friday, July 02, 2010

For a moment I was afraid to look at the photo in case it came out something like this.

That for me is one of the joys of my Android 'phone. It even has a Star Trek styled tricorder that shows several sets of live data! It too has the tune finder, also stop watches galore, decibel meter, measuring tape, the splendid jewels game (how many hours have I wasted on that?), and a voice recognition search feature, to name but a few. And the best bit is every single app I've downloaded so far has been free. Yes, there are paid versions and apps that are pay only, but I've not found them to be necessary.

I'm due an upgrade in August, I'm thinking about the HTC Desire. ;-)