Back in in my nineties day job using Windows '95, one of my favorite things of the OS was a screensaver, I think it was called Vortex, but I'm not sure. It froze an image of whatever you had on your screen, windows and all, and then it animated it with a sort of vortex which swirled around on the screen. It was beautiful, and I think it's amazing it could be done with a friggin' 486 computer.

I liked particularly to run it with the Gogh Starry Night painting, because the vortices fit well with those in the sky. Below is a screenshot (well, looks like several combined) of the screensaver running, which I made back then. 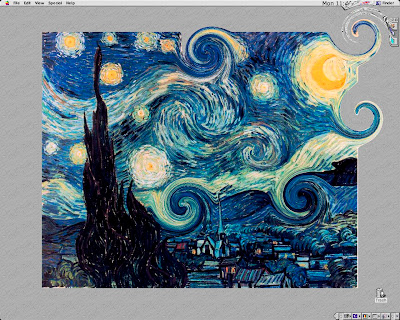 Hmm, I can see the screenshot is actually taken on my Mac back then, so this means it might be from 2000, and that I had managed to find a Mac OS 8 equivalent.
Anyway, I'd be grateful if anybody can find such a screensaver for me, either for Mac OS X (Snow Leopard) or Windows (Win7).
Posted by Eolake Stobblehouse at Saturday, July 03, 2010

Thanks for the brilliant idea there! :-)

You think the one from an older Windows would work on Win7? I think I can find it either on my system, or on the complete back-up of my older, now defunct systems. Should be quite a small file, easy to e-mail.

I dunno, seems unlikely. I think windows has a pretty big tendency to break app when updated.

You sure? A screensaver is a screensaver...
Best option is that I find it, send it to you, and you try it. Just give me a "noment" (my verif!).
I'll check it out on my here XP before sending it.