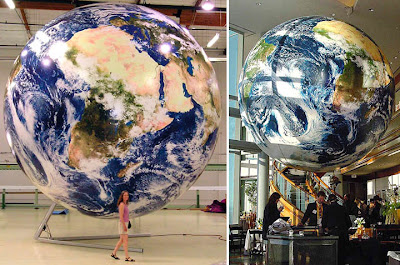 Many years ago, I had a roommate (we lived four in an apartment, fun times) who I saw one day I came home, sitting staring meditatively at a world atlas. I asked what he was doing, and he said he was thinking about what we were going to do about this world.

This was a guy who's a nice guy, but he could not even handle his own life. He always had money problems, he did office cleaning  for a living in his thirties even though he hated it. And worse, he was no good at it, he couldn't clean anything to save his life. Items he had done in the dishes were never clean! Another friend took over the room when I moved, and she later told me that she currently had a project of teaching the guy to do the dishes properly!

Funny enough, I heard that years later, the guy won one of the biggest lottery prizes ever to be given in Denmark! I hope it has done him some good. I know he gave a lot of it to one of those churches who are really good at getting people to donate. I just hope he kept some for himself.
Posted by Eolake Stobblehouse at Sunday, August 22, 2010

"to one of those churches who are really good at getting people to donate"...

"Madam, the God you pray to isn't available anymore. He's just been indicted for tax fraud."