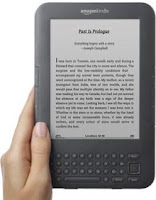 David Pogue reviews "what everyone (except Amazon) is calling the Kindle 3". (Yeah, I wonder what the reasoning is behind not calling it "3"? It's just confusing to have no separation of models. Accessories have to be described as fitting "the latest generation", not very precise.)

It's a very positive review, which makes me happy, for I ordered one weeks ago, and I should get it within a few days.

I already (today actually) got my red leather cover with a clever little LED night light built in (does not add to the bulk, it draws power from the Kindle and is very flat and pulls out from the corner), and it really is a very nice object. Very pleasing. It should look nice with the "graphite" colored Kindle. (Took them long enough to realize it should be darker than the grey screen.)
(Hah! The cover is almost half the price of the device! Funny.)

Like Pogue says, the Kindle is now competing with the iPad in precisely the areas it has going for it: size, price, and weight. It's roughly a third of the price, a third of the size, and a third of the weight. And it seems this is striking gold, if you order now in the UK, delivery is two or three weeks later than originally promised, so I guess they're selling better than ever. (Actually, I think this is the first model which is being sold from the UK, so that may aid the size of the crowd who wants one.)
(A UK review here from The Independent. Weird article, though, it really does not say much.)
Update: TCG found this unpacking video from a publishing CEO.

Update:
What I'd like is something with a good screen like the iPad's (smaller would be OK), and weighing less than 300 grams. Should that be so hard? Why have all the ebook readers that awful e-paper? Battery life? Would it be so terrible to have to charge it every couple of days?

OK, I'll see tomorrow, they do say the new Kindle's e-paper is not quite as awful (dark) as the older models'. But still, there should at least be room for a model with an LCD screen, no?

Has anybody heard anything about why all the makers have selected the e-paper screens?
Posted by Eolake Stobblehouse at Thursday, August 26, 2010

Here's an "unboxing" vid of a Kindle 3 of a CEO of a publishing firm that I follow on Twitter.