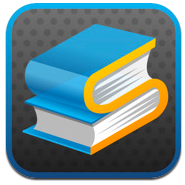 Before the iPad, the most popular and respected ebook reading app for the iPhone was called Stanza. It took a while for an iPad version to appear, but it's been here now also for a while, and since I only have three or four major ebook reading apps on the ol' pad, naturally I decided I needed one more.

It's a good one though. It's the first I've seen (compared to Kindle, iBooks, and Nook) which lets you choose from *all* the fonts in the system. The text size adjustment is virtually stepless, which I love, most apps have too crude steps. It has stepless variation of margins. The other apps don't even *have* such an adjustment. It has in-app access to many online book sources, paid and free. (Oh, and amazingly, the app itself is free too.)

I've only used it a bit so far, but right now, it's a clear Recommended.
Posted by Eolake Stobblehouse at Monday, August 23, 2010

Thank you form mentioning this Eolake. I have been using Stanza for about 10 minutes now and I am impressed. I don't think I will go back to iBooks.

Cool. Thanks for writing.

You are welcome. I'm still using this and liking it. Night mode is one good reason to use Stanza. It reverses the colors, white writing on a black page. Reading with the lights out is kind of fun.