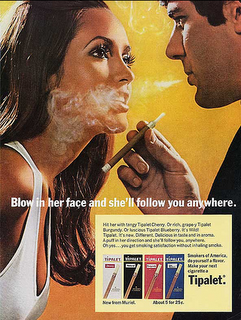 "... she will follow you anywhere."
Vintage ads.
Posted by Eolake Stobblehouse at Friday, October 06, 2006

great reminder of the good old days before this insideous prohibition was forced about smoking, though it will never work.
you can't force people to stop doing something by force, it never works, never will.
they tried prohibition on alcohol and it kicked them in the face. but people are idiots regardless. history teaches them nothing. thanks for posting that vintage sign eolake it made my day :)

Similarly, how stupid was it to criminalise hashish and heroine? (BTW, it was Amerika who started that nonsense, and other countries then followed suit. How else?) As a result, we now have all kinds of drug related problems and issues in our society, not to mention "crime", and whole departments in our police force to deal with them. Idiots! And now we are heading the same with with tobacco.

Prohibition? Smoking?
Did I miss something?
You can still legally buy cigarettes, or can you not?

I'm not for prohibiting anything - well I mean at least not things like tobacco or hash - but I do object to being forced to inhale smoke wherever I go just because some people think it's their right to makee smoke clouds wherever they go (and my clothes smell for the rest of the day).

I mean, I do (generally) refrain from farting if it could inconvenience anyone. And people are so intolerant! (Just to shorten *that* stupid discussion, or rather the stupid argument that anyone not wanting to breathe in some gratuitous pollution is intolerant...)

I guess it's the same old game: if there weren't so many inconsiderate smokers, like those who can't even make it without one in the elevator, there wouldn't now be rules for everyone.

Smoking is not going to be prohibited anytime soon, there's just too much money in it for the government.

As for the ads - yeah, kind of funny, besides that I'm wondering how many people might've believed that shit.

Free smoking anywhere forbids non-smokers from NOT smoking. The guilty accuse their victims!

I think anybody should be free to poison themselves, as long as they don't force-drag me along. Besides, I have allergic rhinitis, so they really MAKE me sick, instantly.

As for drugs, while I agree their users shouls be helped, not punished, there is that small matter that they make users irresponsible of their actions, just like some few people can become murderers under the influence of alcohol. It's a direct liability for society. And it should be addressed as such : not a criminal behavior, but an aggravating circumstance if you drag yourself to a criminal behavior through it.
I see drug-using american celebrities being forced to choose between treatment and going to jail. Well, although they would have a hard time deciding to treat themselves without a strong incentive (that's the specificity of addictions), where's the logic in jailing a junkie who won't seek help if they're a threat to nobody but themselves? Kind of reminds me of that discussion about laws prohibiting suicide...

Basically, I'm saying I'm all for criminalizing drunk driving. :-)
But not drunk sitting at home!!!

"I do (generally) refrain from farting if it could inconvenience anyone."
Yeah, that's a good way to sum up the "stinking others up" matter.
Except that there's at least an excuse for farting : everybody does it, it's natural, it happens by itself. Disgusting, like ca-ca, but natural. Everybody HAS to do it at some point, and regularly.
Contrarily to smoking, which requires a long "training" before you can accustom your respiratory tract to withstanding such an aggression! A cellular adaptation that eventually goes too far, and will evolve in cancer. I've heard, from a surgeon, of TWO cases where a cigarette lip burn soon degenerated into cancer.
Have you ever seen what a lip cancer looks like? Let's just say it could easily give you nightmares. As ugly as top-class hollywood horror special effects. (And where do you think they GOT their inspiration???)

"the stupid argument that anyone not wanting to breathe in some gratuitous pollution is intolerant..."
Is it tolerance, to deliberately inconvene all non-smokers around? And is it intolerance, when you MAKE yourself intolerable? Why is it illegal to throw garbage in somebody's backyard, but not to send poisons deep into their lungs?
200 toxic substances is cigarette smoke, among which 40 that are proven to cause cancer. (And my data is dated...)

I'd like to make an approximate parallel. I'm a chocolate addict. I mean, really, I have chocolate cravings morning, noon and evening, and I indulge whenever possible. A lot. (Well, since I have normal weight and am not getting any fatter, "a lot" must be relative, but you get the idea.) However, people around me, apart from those who live in my house, have no idea about this unless I tell them. Why? Because, I don't smell of chocolate from several feet away, I don't have brown goo smeared all over my mouth (or fingertips), and basically, I refrain myself from buying and eating chocolate when I go out in the street, even though eating a choco bar in public is perfectly okay!
Now, suppose I was talking about smoking tobacco instead of eating chocolate... Me, I CANNOT be a nuisance to any person on the street, even if they HATE chocolate, even if the mere smell of chocolate would kill them from some acute allergic reaction.
So, why can't smokers REFRAIN themselves in public? I heard Michael Douglas had himself treated for sex addiction (lucky bastard!). But yet, I never heard news that he got arrested or fined for public fucking. Why's that, I wonder?

Trouble is, smoking is an addiction. It's been clinically proven, for those who hadn't yet bothered to listen to a smoker explaining how amazingly difficult it is to try and quit. When these people can't wait until they return home before they "have one" (I don't eat my beloved chocolate during work hours), they're just giving us the sorry display of having their fix in public. Not very different from a coke addict sniffing his stuff, or a heroin user sticking an needle in himself while lying in the gutter. Except that coke and heroin don't jump at innocent bystanders, which makes them somehow of a lesser evil.

I once heard of a French football player who, after an official match, was controlled positive for cannabis. Well, first of all, I never heard of Hash being an actual performance enhancer! It's much more likely to ruin the concentration of a top soccer player. So, why seek it in tests? And second, the player (which already I didn't condemn) gave a very convincing plea : he said he had been to a party a couble of days earlier, where some OTHER PEOPLE smoked joints. Second-hand weed smoking, unintentional, is nothing hard to believe! In fact, all charges against that athlete were soon dropped.

"As for the ads - yeah, kind of funny, besides that I'm wondering how many people might've believed that shit."
Yes. Funny in a monstruous way. Just like Evil Dead 3 was a hilariously macabre comedy.
I can never forget the presumably glamourous Marlboro cow-boy, who got cancer and then started shooting very similar-looking clips, but this time AGAINST smoking. Redemption?...

Finally, I'll have to join voices with Terry and TTL : anything outlawed will benefit organized crime when driven underground. Again, prohibition is a counter-productive answer. But it's the only one that "straight-thinking" bigots will bother considering.
With all the rampant crime in Lebanon, the Police are still wasting their time cracking down on... homosexuals! Who, of course, are the most terrible threat to Society and decency that the Devil ever unleashed on us God-fearing good people! ):-P

I agree with Pascal R., smoking has been medically proven to be harmful to our well-being. There nit is a good idea to ban smoking. Sorry, to say but no offence, Eolake, that I personally find this photograph to be degrading to the morals and well-being to our soceity. I appreciate for what you have posted on your blog, but it shows on how degrading the pictures were in the past. Therefore, the saying that old is gold does not always work in real life.

I know *I* never said that.