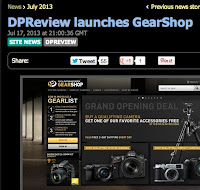 One of the biggest photo gear review sites in the world (the biggest?), DPReview, which was bought by Amazon a couple of years ago, has set up their own store, selling the gear they review. "... every product in the store has been approved for inclusion by the DPReview editorial staff."

Many people believe that it's inherently a conflict of interest for a publication to be selling or have ads for the things it is reviewing. That they can't possibly be independent and unbiased after that.

I don't know. It can be difficult I guess. If, say, Sony treats them really well, say, sending expensive review samples early to them and offering especially good offers for their readers, it might be difficult for them to decide to stand up and give a scathing review for a Sony camera if needed.


Update:
It was an accident that I used "Sony" as example, probably simply because I'd just seen them mentioned somewhere. But just now by interesting coincidence I came across this little tidbit.
"A simple fact. The Sony NEX-7 is not on the list of the top 100 selling cameras at Amazon (the Sony NEX-6 is on the list – dead last at 100.)
I received the following email from an agent for Sony…
[...] I want to reach out to you with an invitation to a very exclusive opportunity with Sony Electronics! The elite Sony Ambassador Program [...]
Participation in the Sony Ambassador Program will include tons of free products and perks like an all-expenses paid trip to sunny San Diego to meet the Sony team..."

I dunno, maybe I had a feeling that old photographic companies like Nikon or Pentax run their business in a different way than multi-faceted electronics giants like Sony. But I don't know.
But: "tons of free products"...  And I wonder how many of the "Sony Ambassadors" bother to disclose this relationship regularly to their readers?
Posted by Eolake Stobblehouse at Thursday, July 18, 2013

There should be little reason for dpreview to fiddle with their reviews. The product will come through Amazon, and will likely all have similar markups, so it wont matter what they sell. What most manufacturers do, if they don't like the reviews, they will stop supplying product for review.

The NEX-7 would get a lot of coverage because it is an unusually well specified camera in it's class, so it is interesting in the same way as the sports versions of cars are of interest to car review readers, but as they are more expensive sales tend to be lower. People will read reviews of products they are never going to buy, if they are special enough.

True enough.
The NEX7 is getting much praise for very high quality.
Even though I consider it an odd duck, with the tiny body and huge lenses, necessitated by the too-large sensor, which I consider behind the times, as written about recently.

As a side note, it's amusing to read the different photoblogs and observe the personalities. Kirk Tuck is more amusing than a teenage girl, Steve Huff has the personality of a happy black lab, Ken Rockwell... well he's just Ken Rockwell, LOL.

Makes me appreciate our friend Mike Johnston. Interesting how Samsung reviews started popping up once they sent out a slew of free cameras.

Yes, Mike stands way above the crowd in many ways. Skill of writing, he's entertaining too, and he is, so far as I know, unusually honest and straightforward.

DP Review has always recommended a product in it's reviews and percentages are usually above 70%.
The text may allude to buy something else, but never outright saying so.