"Abridged" should be marked

A tip/Open letter to Apple about audiobooks

Apple,
It has happened to me now at least three times that I have bought an audiobook, read it partially or fully, and then somehow finding out that it was an abridged book, which had not been shown when I bought it. (Last time I found out, it was only because I'd also bought the ebook version, and I found material in there which was not in the audiobook.)

Then I had to buy the book again, because it seemed that later, an unabridged version had come out.

It would not be a problem if not for the fact that the abridged state of the books was not adverticed on iTunes store. I had no way of knowing it was not the full book I was  buying.

---
So, readers, beware of this, look at the price and length of the book, if it seems cheaper and shorter than usual for the author, try and find out (how, I don't know) if it's abridged before buying.

The latest example is Unseen Academicals by Terry Pratchett. When I read it the first time, I thought it was pretty good, but not a favorite. Now that I have the missing material (over 60%!), I'm finding that it's a much better book than I thought.
Why does anybody want to abridge Pratchett books anyway? He writes so tight, there is nothing weak you can trim. 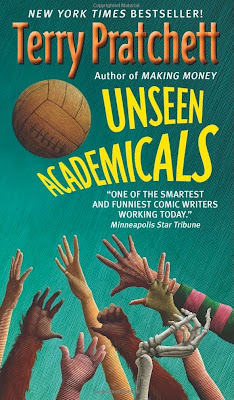 E. Blackadder said...
I had this problem once. When I complained they pretty much told me to fuck myself.

Yes, I admit that's a phenomenon. Amazon has fantastic, outstanding customer support. You call and complain, and you have a replacement product in your hand before you've hung up. Sometimes even if it's clearly you who broke it.  With Apple it's a different story, I'd hardly know how to contact them even.

They've got me this way before too. I'm glad I'm not the only one. It's infuriating. Or at least very annoying.

I had this problem once. When I complained they pretty much told me to fuck myself. So now I'll buy from Audible but won't go near itunes. Audible is owned by Amazon. Luckily, Apple doesn't own Amazon.

Amazon has fantastic, outstanding customer support. You call and complain, and you have a replacement product in your hand before you've hung up.

Yes, Amazon's customer support is very good. If I can I'll probably buy audio books from Audible instead of itunes. I too basically got told to fuck myself when I complained - but it wasn't easy, like you said, even to contact them.