Remember I said I hoped major comics would come to the iPad. Well, it seems they will sooner than I'd imagined. I just found a comics-reader app, PanelFly, for the iPhone (and soon for iPad, one imagines, though their site is vague here*), which include Marvel comics. And the app is very well received, based on iTunes user reviews. Promising.
(It may be just the novelty though, a reader on Scott McCloud's blog calls it buggy.)
Here's a preview video. It looks like a full-featured app which should be excellent on the iPad, if it's not buggy.

... I'm trying the app right now on my iPod Touch, so far not bad at all. I've bought the first issue of some title named "New X-Men" for two bucks I think it was, and the download seems pretty speedy, half a minute or so.

... Even with a comic book reconstituted from paper pages, and on the small screen, it's actually a decent reading experience, though you have to fiddle with the screen a lot to zoom in and scroll around. This should be pretty much eliminated once it's on an iPad, given the latter's more than 5x resolution.

The automatic panel selection feature (by clicking on the right of the screen) is very neat. I gues they must have to program that in carefully for each page of every comic, well done. They even select well-choses sections of a page in sequence, when there are no clear panels to go by, or when panels are too large. 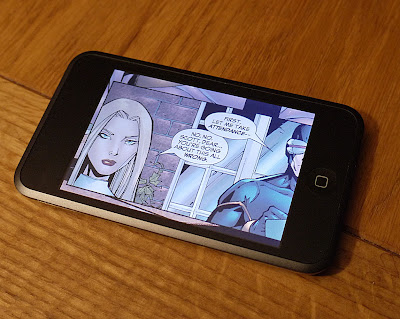 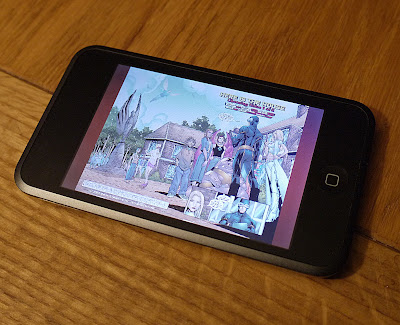 (My own photos.)
I find that the graphics look really good, and that $2 per comic book issue is a quite fair price. So far so good!

Prices vary though. Some are just one dollar. And one I've seen so far, is $5, and unfortunately this one, "Pinocchio Vampire Slayer" is the most dillettantish piece of guano I've seen in a long time. No color, no drawing skills, no story. But then that may be promishing for other creators, if that guy could find a publisher. 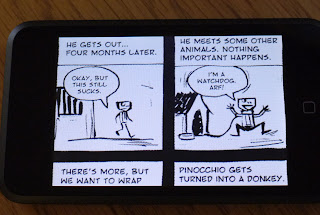 I just hope that Panelfly and iTunes will open up to self-publisher, this would be a great marketplace. Panelfly does actually have a page on their site aimed at creators, but it's not open yet.

Well, if they don't, if I make a comic and it's decent, I should have a chance at getting my foot in at one of the many independent publishers they already have in their roost. Years ago I was in talk with one about doing adaptions of Hans Christian Anderson, but then they went belly-up before it happened. And I'm sure I could do a much better job these days.

Unlike paper publishing, publishing digitally is virtually risk-less, you don't have the big overhead of the printer's cost, which for a color comics is a huge outlay. So it should be easier to get in.
And of course if you make the product for digital media from the beginning, you can design it for them, page sizes/formats etc.

I'm quite pleased with PanelFly. And the store works as well as iTunes, surprisingly.
(Only tiny sour note so far was that I just bought a three-issue story arch of The Fantastic Four, and the third issue is taking aaaages to download for some reason.)


I have been looking for articles on these topics for a long time. I don't know how grateful you are for posting on this topic. Thank you for the numerous articles on this site, I will subscribe to those links in my bookmarks and visit them often. Have a nice day
Do check
Paypal Login
gemini login

It is in reality a correctly-researched content material and high-quality wording.
I got correspondingly engaged in this fabric that I couldnt wait analyzing. i am impressed in the end your positioned it on and skillability. thank you
Do check
Telstra email login