This is from the free sample of a Doonesbury book, from the Amazon Kindle store. I did not know they published this kind of stuff there. 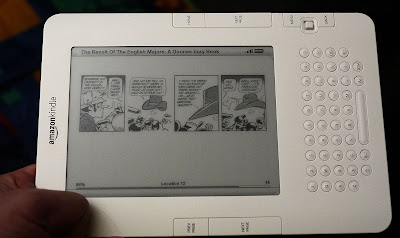 It's pretty brave to publish Doonesbury on the Kindle! It's just hard to read. (I have adjusted the levels to make it look on the photo like it looks to me in ordinary indoor lighting, even pretty good light.)

I'm really looking forward to this kind of stuff on the iPad though.
Admittedly you'll have higher resolution (I hope) if you buy it on the bigger Kindle DX, but you'll still have the grey background, and the Sunday pages won't be in color (those look fabulous in the paperback collections).

-----
Again, keeeeewl:
I just got "custom recipes" for reading updates automatically on my Kindle, via the calibre software, of Luminous-Landscape, The Online Photographer, and swedish site Kamera&Bild. Love that this can be done!
Sometimes the feed is cut off by a link to "read further" in an article, but usually it works fine.

-----
By the way, I just tried the experimental web browser on the Kindle II, and found out that surfing the web on the device "can't be done in some countries due to local restrictions". I'm guessing this means that the cell phone providers are being paid enough by Amazon from Kindle book sales to support connection to the book store itself, but they judge, not enough to pay for web surfing. They surely fear it would cannibalize their data packet contracts with their own customers.

-----
Update:
I hate to be such an iPad fanboy... but I am, no denying it. Oh well. Anyway, it feels to me, after using the Kindle much more recently, and thinking about the iPad, that the web, and as such the global communication and creativity, has become closer. I had not realized it could.

Also, if comic books will begin to be published on the iPad (and it would be a huge missed opportunity if they don't!), then I just may start reading them again. They have sort of fallen by the wayside for me in the past couple of years (amazingly since they were a stable of my life for 40 years), and I realize I sort of miss them. I'm not sure of all the factors, but one of them is surely the huge amount of great entertainment available on DVD when I want to relax. Also, comic books have become so much work! You can't just read three titles if you want to understand what's going on, you pretty much have to read all the titles in the DC universe, or the Marvel one, it's insane. And they are so grim too! Not much fun. I miss Alan Moore and Neil Gaiman.
Posted by Eolake Stobblehouse at Sunday, January 31, 2010