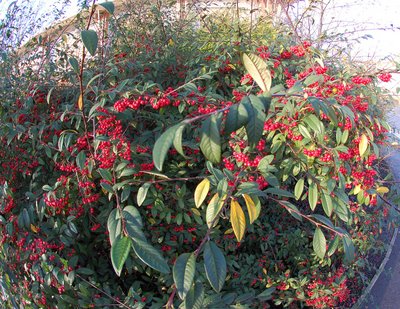 When I make my eyes fuzzy it looks like a Monet.

I let my eyes go fuzzy a lot. So I think the world's a garden.

signalroom said...
When I make my eyes fuzzy it looks like a Monet.

Hi Laurie,
What is a Monet? Just wondering. Thank you.

Born: 14 November 1840
Birthplace: Paris, France
Died: 5 December 1926
Best Known As: Impressionist painter of water lilies
Claude Monet was a founder and central figure of the 19th century art movement known as Impressionism. Early in his career, Monet painted realistic landscapes, but after the 1870s he focused more on the effect of changing light on everyday objects. Often he painted multiple studies of the same subjects, from train stations and haystacks to the London skyline, the Rouen Cathedral and, most famously, water lilies. During the Franco-Prussian War (1870-71) Monet fled from Paris to England, where he formed friendships with Camille Pisarro, Auguste Renoir and other figures central to Impressionism. He returned to Paris at the end of the war, but ended up settling in Giverny, where he began a long series of paintings of haystacks (or grainstacks) during the 1890s. Monet's Impressionistic paintings sold well and his financial success allowed him to purchase property in Giverny, where he built a large garden that became the subject of his series Water Lilies (1906-26). Monet's scenes have since become some of the most recognized paintings in the world.

Monet's painting Impression: Series (1872) is said to be the inspiration for the name of Impressionism... Monet spent two years in the military, in Algiers, before his father agreed to buy him out of his conscripted seven-year service.

I love his water lilies series. :-)

Now, if you don't believe in past lives you may prefer to think I'm joking, but I hung around the impressionists near the end of the nineteenth, and I know several of them live in Copenhagen now. Monet amongst them. I shared an apartment with him and two other guys in the late eighties. He is a pretty miserable character this lifetime, living off cleaning jobs and hating every minute.
But then last I heard he won five million dollars in the lottery. Go figure.

I blame it on liberal globalization, the return of wild capitalism. A sensitive character like impressionist Monet would immediately see how beauty of the human society is fading away these days, after a period of high hopes.

I hope now that he has some means he'll be able to do something about it. Paint your models, for example? :-)

Au contraire, the humanities and spirituality are bigger and more vital than ever in humanity's history.

Au contraire, the humanities and spirituality are bigger and more vital than ever in humanity's history.

so true eolake. thanks for the monnet explanation, i appreciate that sir.

Can you eat these kinds of berries eolake?