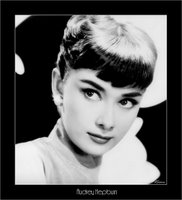 [Backtranslated by Pascal from French, I don't have the original text.]

Audrey Hepburn, interviewed by William Holden, was asked about her beauty secrets. This is what she said:

To have beautiful eyes, look for generous people.

To be serene, walk knowing you never walk alone.

People, even more than things, need to be restored, revived, salvaged and forgiven; never reject somebody.

Remember, if you need a helping hand, there's one at the end of each of your arms. While you grow up, you'll come to realize that you have two hands, one to help you, and one to help others.

A woman's beauty is not in the clothes she wears, her silhouette or the way she does her hair. A woman's beauty must show through her eyes, for they are the door leading to her heart, where love resides.

A woman's beauty is not in the prettiness of the face, for the true beauty of a woman is reflected in her soul. It's the care she gives with love, the passion she displays.

So good I have sent a copy to my off spring!

oh lovely. This one I had to make several copies of to give away.

Who is this person? Thank you.

A movie star.
"Breakfast At Tiffanys", for instance.

eolake said...
A movie star.
"Breakfast At Tiffanys", for instance.

Thanks eolake. Never heard of her before now. Is she still around? What made her special? She looks average, like just another face in the crowd of six billion people.
I mean, did she do anything worthwhile for the population or for God? Enlighten me if you will.

I recommend looking her up at wikipedia.org.

eolake said...
I recommend looking her up at wikipedia.org.

dan turnbull said... "Who is this person?"

It turns out that if you show pictures at a rapid succession, say 24 frames per second, it gives the impression of motion -- rather convincingly I might say. During the last 80 years this technique, known as motion picture or cinema, has spawned a whole industry.

Now; as to subject matter: The human being has proven to be the most popular. Much more so than still life or inorganic matter. Although you often see those depicted as well.

When the same person appears repeatedly in several motion picture works she often gains some notoriety through these appearances -- or even becomes famous.

Audrey Hepburn was one of the most famous and talented such performers. In fact, in 1999, she was ranked as the third greatest female star of all time by the American Film Institute.

I hope this helps.

Maybe that was true in her time, I'm not sure, but how many guys will get close enough to a woman to even see her eyes if he isn't impressed with the rest of her?

Sorry about the cynicism and to break the romanticism, and maybe I am being too harsh. But it just doesn't seem realistic.

Maybe that was true in her time, I'm not sure, but how many guys will get close enough to a woman to even see her eyes if he isn't impressed with the rest of her?

That's true Hannah. Very true. I hope you don't mind me saying but your photo is a little off center I think. Or is it just me?
Have a great day!

but your photo is a little off center I think.

I think she did that on purpose rupert? I think.

Hannah said...
"how many guys will get close enough to a woman to even see her eyes if he isn't impressed with the rest of her?"
I'm one. I cannot be impressed (or the opposite) by a woman before I have a good look at her face.
Let's be honest : when you make love, the part you'll see most often of your partner's body will usually be the face.

So it is essential. And in the face itself, the expression is more important than the shape. A stunning woman with a disdainful look would kill all desire in me. I need eyes that say "I love you, let's be intimate".
Or, at the very least in the street : "I like you, let's be friends".
I can never "get" those people for whom sex and feelings are strictly separate entities.
And yet, 'lo and behold, I'm a male who feels that way, but I'm not gay! So it IS possible. :-)))

Rupert Holmes,
Yes, it is you. Your monitor is a bit off-centered to the right. ;-)

"Let's be honest : when you make love, the part you'll see most often of your partner's body will usually be the face."

I don't know what you're talking about, I usually see some part of the rack or the donkey.

Hey! How come the insulting, bigoted and personally attacking entry I posted in this thread earlier was removed? I don't get it.

Is it because there was no anti-semitism in it?

Yep, you nailed it.

I don't know what you're talking about, I usually see some part of the rack or the donkey.

I can never "get" those people for whom sex and feelings are strictly separate entities.

brothels provide this pascal. try it you may like it. :)

People, need to be restored, revived, salvaged and forgiven; never reject somebody.

So right and our Lord never has. I feel the same way, for all can be forgiven, yes even Bin Laden if he choses to ask for forgiveness and turn away from his evil sin.
So can Bush Jr for masquerading as a saint amoung Christianity.
Is it likely? Kind of doubt it but it's possible.
The best place for Bush is on a trial stand under oath for his crimes agaisn,t humanity.
Impeachment would be the best start, then after they find him guilty of treason and conspiracy, then a long long punishment should follow. Bin Laden included.

Well, brothels I like; separation I never tried though. The ladies there have feelings too, you know. Especially for me...
Golly, it's so hard to get accustomed to being irresistible! (Good thing I'm also incredibly modest.)

"Former Judge T. Booth"? I thought judges were like priests and generals : even retired, you always remain one?

Hannah, wonder what you meant by this?

I think Hannah means that it is easier for a pretty woman to tell herself that the men love her primarily for her soulful eyes. And if she is less than stunning, it does not seem so easy.

It's a fair point. Although, re-reading what Audrey said, I think she was talking about a higher level beauty, not just what Most Men tend to gravitate towards. Most men also think football is important.

I agree with you, Eolake, that Audrey probably means a higher level. However, I think many people (I catch myself doing it) base their first impressions on appearance. If that appearance isn't good/appealing enough, then how in the world would they get close enough to look at their eyes.

Eolake said...
"Most men also think football is important."
WHAT?!?!? You mean it's NOT a scientific and universal cosmic truth then? Dude, what could be more important than football? Not even sex 'n' booze!

Maybe the problem is that you focus too much on short term success?
It's essential sometimes, like for snatching that coveted job position with a shallow male boss, but it's not all about immediate results. For your life companionship, short term is just that. I like looks, but depth is always number one in my book, no question about it.

Audrey Hepburn's closing statement was : "A woman's beauty grows with the years." Look at the third image in the "Alice Babs" post. Audrey wasn't talking about smooth face and flat tummy there. Real beauty, on this higher level, is the true woman inside the body, the one I'll want to live with, for years and years, when we're both wilted and wrinkled and very much in love. Looks are passing, while real life is engraved in the timestream, which we all follow at the same speed. A loving mother is always beautiful.

You want the truth? Take it from the children's mouth. Just ask any of them who's the most beautiful woman in the world. Because they don't have a vision tinted by sexuality, they'll give you a profound truth. Innocent, but not naive!
Biologically, an attractive woman is normally one with which you can picture yourself raising a family. If you're mentally mature. Isn't it true that women find caring men, who are fatherly toward children, extremely attractive? I've verified it first hand. And thanks to the love shared with my brother's children, I feel I'm getting sexier every day! :-)

I'm not at all sure about your "recipe for catastrophe". In prehistoric times, physical beauty was very important as a sign of good health and aptitude to bear children, therefore for the survival of the species. Today it's become totally artificial and warped, with the diktats of trends and fashion and the like. Remember, the "official" ideal of beauty is the fashion models : those sickly walking twigs. Now, THAT's totally unrealistic. But not one bit romantic.
And don't even get me started on silicone. If you've had breast cancer surgery, I'm all for it. But not if you have a normal, healthy, and therefore beautiful body!!!

Read this friday's newsletter, Hannah. And then I dare you to come and tell me you're not beautiful. :-)
In fact, "I triple-dare you with whipped cream and melted chocolate on top!" (Yummie!)

You know, about that photo of yours? I think you're peeking at the real you, not sure if you dare look at it. But there's nothing to fear.

Step into the light, sister. You probably won't find a Romeo. But you'll probably find some day a real companion, serious lasting love.
I have faith in you.

Step into the light, sister. You probably won't find a Romeo. But you'll probably find some day a real companion, serious lasting love.
I have faith in you.

what sentiments pascal, very touched by your words. hanah should step into the light. be not afraid of those who may not like your appearance yet rejoice at those who will find you attractive.
don't become like me........afraid of everlasting rejection because i don't favor brad pitt or nick nolte.

"Former Judge T. Booth"? I thought judges were like priests and generals : even retired, you always remain one?

Dr Pascal,
When you retire, will you still refer to yourself as a former doctor?

Former Judge T. Booth said...
"When you retire, will you still refer to yourself as a former doctor?"
I'll always be "Doctor Pascal". Anyway, that's the custom around here. This country would consider it impolite to call anybody a "former" something.
(And if the "something" in question is negative, it's just not mentioned!)

You may call yourself the way you like, of course. It's just that I'm not used to this style. Cultural differences, I guess. :-)