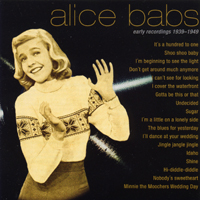 My father was a big fan of The Swe-Danes, and his LP of their good-bye concert from the early sixties was one of those I listened to as a child.
Apparently, despite being huge both in Europe and the USA back then, The Swe-Danes are almost lost to history now. 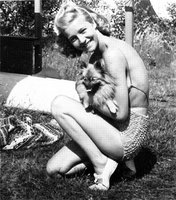 A web search turns out precious little, and I had to use eBay to get any kind of music from them, and what I found was not that LP, but a CD with "Alice Babs and the Swe-Danes" ("that's not 'the Sweet Danes'", as Ulrik Neuman jested during the concert. Alice is swedish, Ulrik and Sven Danish). Fortunately this one too is really nice and has some of the same music.

It swings something fierce. And it is so wonderfully happy and joyful music. Infectious. Listen to this! (If you have iTunes (free from apple.com) you can play this file.) 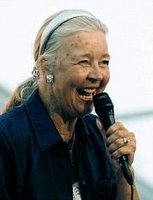 One thing that strikes me is another indicator of how much progress we have made in the last half of the 20th. Alice Babs would stand today as the penultimate in Safe And Wholesome entertainment to young people, her entire person and what she did in music and films was sweet and innocent and positive to modern eyes. And yet because sang in a jazzy and unusual manner, and because a big youth culture supported her, the conservative and religious establishment demonized her.

Amazingly, she is still singing! (At least a couple of years ago.)

I haven't heard this music for over thirty years, and yet I could still sing many of the songs near-completely, and getting this CD it sound like yesterday. (If you want more songs from it, mail me.)
Posted by Eolake Stobblehouse at Monday, January 15, 2007

Wow, she is really cute. And that song surely is exelent, thank you.

Yep, she sure was a beauty in her days. Not bad today either, all things considered.

It's quite stunning : two of France's most famous pretty women in my childhood, actress Brigitte Bardot and singer Mireille Matthieu, have changed in shuch hugely different ways over the decades.
"Mimi" had a great voice, and very pretty face. I saw her last sunday live on TV, you barely feel the added years on her. Except for her hands : it's always the hands that tell it. It seems she's had a face lift, but was careful to keep it very reasonable. So she doesn't look "stretched", only as if the years have been kind to her.
While "B-B", once the world's most famous sex-symbol, is today scary to look at. She might even spook Michael Jackson, with that face of hers! I suppose it's from constant heavy abuse of cosmetics, that ruined her face like a moon crater bombed by Uncle Sam. She's gone from Sugar-Plum Fairy to Baba Yaga, evil witch of the Russian East.

I guess if you want to count on long term companionship, you need to invest on what doesn't so easily shrivel over the years : inner beauty, of the soul and spirit, which only improves, and becomes tastier like an ever-maturing fruit.

P.S.: I just finished downloading the song. It's so cute, swinging and happy! Doesn't even feel passed. A little as if Domai had been put in music in the Seventies.

I definitely understand why the glum robes hated it. And we all know today what despicable acts they secretly allowed themselves at the very same moment. ):-P
A fat lot of good it did, that the first reported miracle of Jesus was making some excellent wine so that a happy popular celebration wouldn't be prematurely ruined! Our clerics keep forgetting how often their reference texts praise joy, singing and dancing. Nowadays, they only want people to rejoice if they can control it in every detail. "Halleilujah" litterally means "sing, praise, and rejoice". Happy music *isn't* sin.

Me too. Jesus is my saviour and hero. But I haven't heard of Alice Babs before?

I wouldn't compare the Swe-Danes to ABBA, musically, but like ABBA, the Swe-Danes were stars on their own in Scandinavia, before recognition abroad as a group(Well, you know that already).Imagine 40s America finding Judy Garland dangerous? Sweden must have been way behind the U.S. in some ways.I only just discoverd Alice on YouTube and what I really like is how easy she makes it sound!Her seeming effortlesness is unique, I think.

Yes, I don't know anybody else who could sing like her.