Many-gear machine.
its engine runs at 200 revolutions per minute but the last gear of its 12-gear mechanism is locked to a block of concrete. It looks still but, in reality, it is moving. You just can't see it because it completes one revolution every two trillion years.

Hi Eolake,
There are a few fields, for example in clockworks, where one will employ long gear trains solely for the progressive speed reduction and without concern or need for high output torque. Only in such applications will most or even all gears have a similar load bearing capacity. If, however, you are seeking to increase torque, then it will make sense to use progressively meatier gears along the transmission path to ensure that each element be able to handle the increasing forces involved. Note, in the image below, how the gears get bigger with increased gearing ratios, for example. 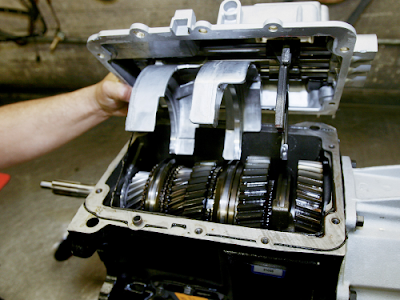 Of course, as an art project, there's nothing wrong with the design shown in the video. But a "proper" implementation of the design would involve more "manly" gears. The middle gears would look something like these (the red thing is a worker's hard hat):


I have no real idea of how large the output gears would be, but it is safe to say that I wouldn't be able to find an illustration of such planet-sized items anyway. Fabricating such a gear train would fall perfectly in the absolutely pointless category of endeavors, mind you, as the earth would be long gone well before breakage became of any concern.

In the case of such gear trains, designed so that each stage is sized to handle the transmitted torque, it is quite hard to predict where a breakage will occur as each and every element will be loaded at (or near to) its limit capacity when said limit is reached. A predictable breakage point is sometimes provided in the design, in the form of a shear pin or other weak link, to protect the heavy, expensive and hard to replace elements from catastrophic failure caused by jamming by an external element. It is much better to have to replace a big pin than to find out that the lock doors just fell off their hinges while crushing and ultimately sinking some boat...

In the case of the assembly shown in the video, unchanged, assuming that:


... it is safe to assume that first failure will occur, many years after power-up, from wear somewhere inside the gearbox mounted on the motor, or from the motor itself. You will be pleased to know that the gear embedded in concrete is quite safe from harm! :-D

Working on the basis of your hypothesis, that is a gear train similar to that of the video but with a demultiplication limited to one year per revolution at the output, and maintaining the above assumptions, breakage is indeed likely to occur at or near the output gear. However, the failure point will likely be at the root of a tooth, where the material is subjected to the highest stress (i.e. a tooth will break off). This would likely take days to occur, depending on the amount of backlash (slop) in the assembly.

---
Thanks, Bert,
Indeed I am sure that it was an art project. Or something like that. Nothing practical, but intended to show that: "wow, there are just a few gears here, but the last one will take over a trillion years to go 'round!"
Posted by Eolake Stobblehouse at Sunday, November 03, 2013