For readers with long memories, I've been wondering out loud
for many years why nobody made digital cameras with looked like the beautiful old-time cameras: metal and dials and such.
Later, Fuji did it, and of course got a big hit with the fabulous X100. I knew they would.

And now, the second retro DSLR (after the Olympus OM-D): the Nikon Df. (Digital Fusion, they say.) It doesn't even have video. And it is full frame. And it's even more physical/retro than the OM-D: it has a shutter speed dial and a IOS dial, for Pete's sake!
And damn, it looks good. (Except the deep casing for those buttons on the  left side of the lens mount. What's up with that? Ugly, and may get in the way of the fingers.) 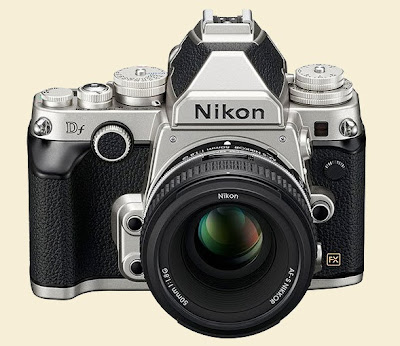 I honestly can't say if it will work better in any practical way than the more modern black-plastic blob forms, but for us who used to work with cameras in the seventies/eighties, it just has an instinctive aesthetic which it is very hard to ignore. 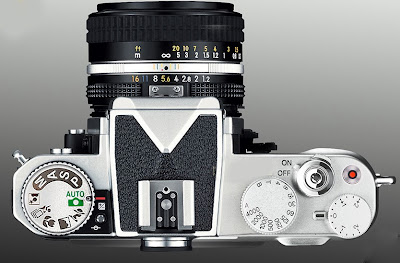 Below: somebody made a mockup of the black version based on Nikon's teaser videos. Damn, that looks good. (Though I think the red line is a bit "nineties" by now. Too old to be fresh, but not old enough to be Retro.    :-) 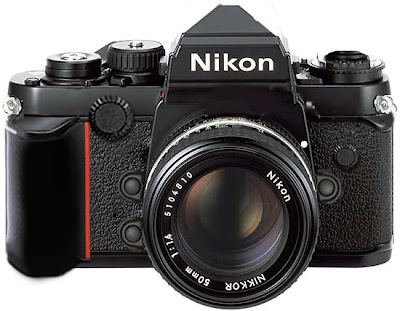 Looks better without the red line, I think.
And in fact looks great. Odd, normally I prefer silver (if it's real metal), but with this one, I may just think the black version looks better.

Fortunately I need this camera like a twit needs a bicycle, because I just got my Oly E-M1! It is lovely. Well, not the prettiest camera they have made, but it feels right in the hand and all the right ways. Fast too, I actually notice that the shutter lack is so near zero, it's almost shocking.
Posted by Eolake Stobblehouse at Monday, November 04, 2013

Setting the shutter speed via dial and aperture via ring on the lens is just an easy, natural way to shoot. The Fujis got that right, and (with certain lenses) this Nikon does, too.

Damn it - all the dials are the locked kind? Why oh why?

Yes, I think that's overdoing it for dials you'd use all the time.